I am not sure if this is just a sub scenario of clearing the currently edited line in any Unix/Linux terminal or is the behavior actually different when you are running MySQL command or maybe it depends on the terminal app I am running...

Anyway, I am using a Debian lenny Linux box running MySQL command prompt and this is all done from windows via putty.

Often while editing the SQL I am writing I want to just "reset" the current edit and start over.

I know I can press End and then enough Backspace until the row is clear but was looking for something faster...

I also know that pressing Ctrl+C kills the mysql console and I can then press the up arrow to get the command that executed the console and start it over. but this feels like an over kill (and also renders quite a lot of text to the screen...).

I am not sure if this is just a sub scenario of clearing the currently edited line in any Unix/Linux terminal or is the behavior actually different when you are running MySQL command or maybe it depends on the terminal app I am running...

It isn't dependent from your terminal emulator; MySQL is different but not to what you might think; and it's not a subset.

Simple Unix and Linux programs just read() from standard input for their input. The historical convention is that terminals in Unix and Linux normally operate in what is known colloquially by its historical name "cooked mode" and what is formally and properly known as "canonical mode". In this mode, a part of the kernel known as the line discipline does all of the line editing, and the program only receives the final edited line from read() when the user sends the end-of-line character (normally LF) from the terminal.

In canonical mode, there are a whole load of special characters that the line discipline recognizes and acts specially upon. The end-of-line character is but one. Another is kill character. This "kills" the (line discipline's) editing buffer. Since the cursor can only be at the end of the line, the line discipline's editing facility not having mechanisms for moving a cursor within the line being edited, this kills the entire line.

Back in the 1980s and 1990s, people wanted a better TUI than this. They wanted the ability to move the cursor within the line. They wanted insert/overstrike modes. They wanted command history.

Thus along came GNU Readline and its ilk. GNU Readline is a library that is used by a number of popular programs including the Bourne Again shell and the mysql command. Readline switches the terminal into what is colloquially known by the historical name "raw mode" (the formal name being "non-canonical mode"). The program read()s the characters from the terminal as they are sent, without any intervening processing by the line discipline. Readline does all of the editing, outwith the kernel.

Nowadays, terminals spend quite a lot of their time in non-canonical mode. They do when modern shells are reading their input. (Not all modern shells use Readline. But they all have something which uses non-canonical mode. The Z Shell has its own mechanism, ZLE. BSD-licensed programs use the BSD libedit library, which Christos Zoulas took from the Tenex C Shell for 4.4BSD, or Editline.) They do when programs that use ncurses are active. Canonical mode is predominantly encountered by people when they do things like accidentally grep the terminal, or use cat to create a file from terminal input, and is heading towards being the exception more than the norm.

Usually, Readline (or libedit, or ZLE, or Editline) will have a binding from the line discipline's VKILL character to one of its "kill" actions. In fact, unless Readline's bind-tty-special-characters variable is off, it will redefine such a binding every time that it is called to read a fresh line of input. It's actually hard to turn this off.

There are three caveats.

None of this involves your terminal emulator in any way.

You may also be ineterested in this answer on U&L.se and in the keybindings shown in the image below: 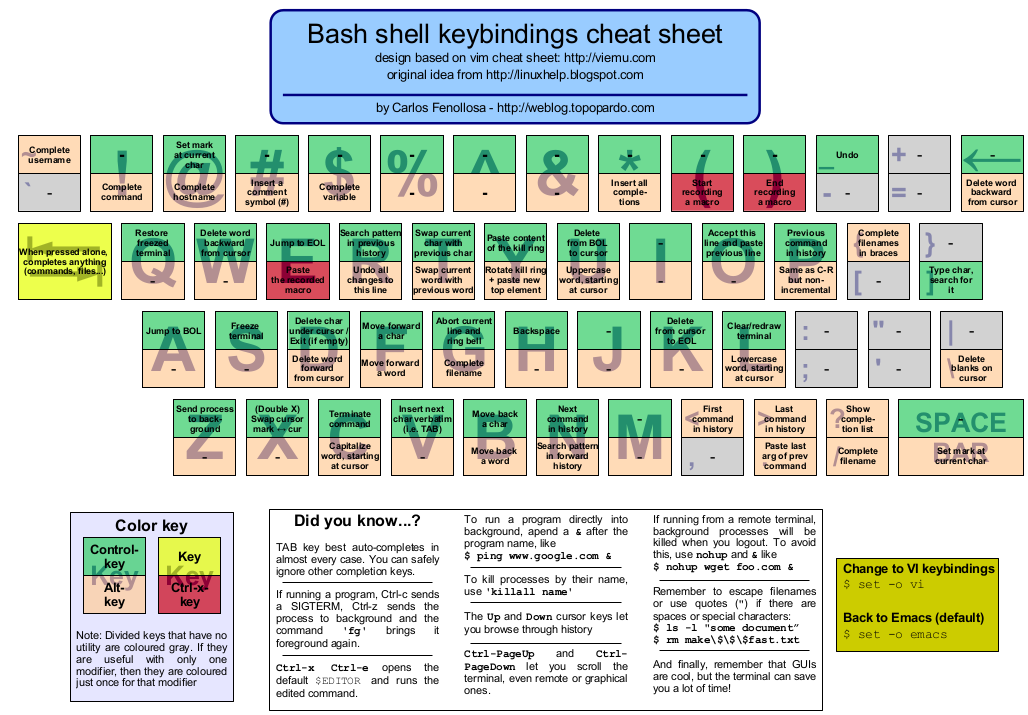 Not the answer you're looking for? Browse other questions tagged linux command-line debian mysql putty or ask your own question.

1
Uninstalling MYSQL from the commandline
0
utf8 hebrew on mysql console on debian (via putty on windows)
7
I believe I've deleted MySQL root user, how do I recreate it?
1
mySQL outfile & permissions under Ubuntu Linux
2
How to abandon current command in MySQL CLI?
0
MySQL won't start
2
PuTTY in console window
1
OpenSSH tunnel and connect to MySQL