All right, I've got a pretty strange one here. Since I installed Windows 7 on this machine some time ago, image thumbnails have never worked properly. For the vast majority of images, they completely fail to show up, showing the icon of the default image viewing application instead. Please note that the “Always show icons, never thumbnails” option in folder options is not checked. I've taken a screenshot demonstrating the problem, here: 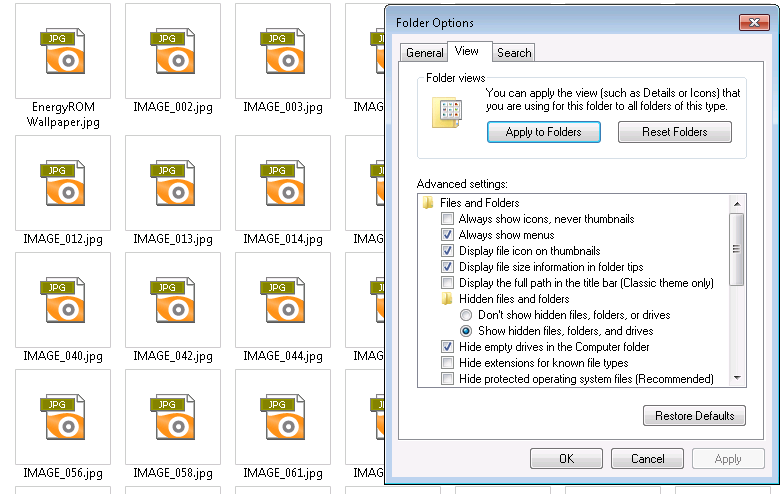 Sometimes, a few image thumbnails will show up correctly, maybe about one in ten, with the rest failing as well. Another screenshot, with a handful of thumbnails visible, can be seen here: 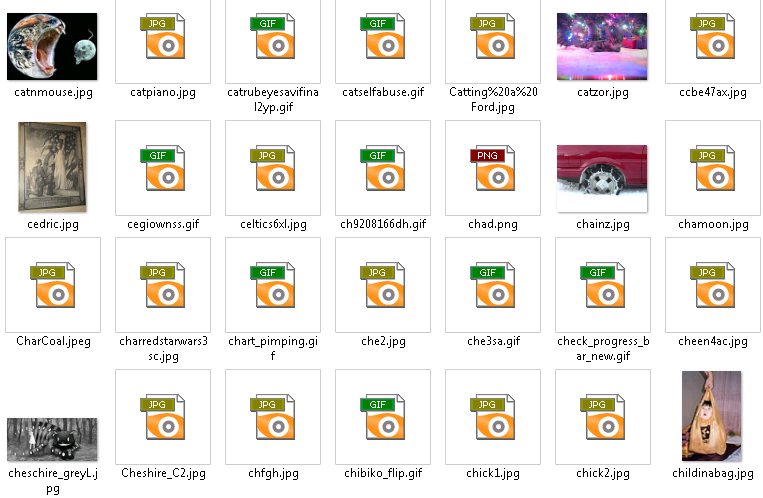 Windows Explorer does not appear to make any effort to populate the missing thumbnails, and there is no appreciable CPU usage. I can leave a window with missing thumbnails open all night and they will still never appear.

Newly created images never generate thumbnails, only images that have been on the system since day one will occasionally show them. This leads me to believe that explorer is set to show thumbnails, but whatever process is supposed to be in charge of actually generating them has failed somehow. In previous versions of windows, explorer.exe itself was responsible for thumbnail generation – has this changed?

Any suggestions at all – even if you aren't sure that they will work – are welcome. I'd hate to have to wipe and reinstall on this machine for such a minor annoyance.

Checking Always show icons, never thumbnails (in the folder options menu you see in the asker's screenshot), applying, unchecking and applying again, solved the problem for me.

Edit 9-12-2014: Additionally, if you go to Advanced system settings and enter the Performance settings tab, ensure that Save taskbar thumbnail previews and Show thumbnails instead of icons are selected in the available check boxes. This affects all folders globally, rather than doing it for each folder. 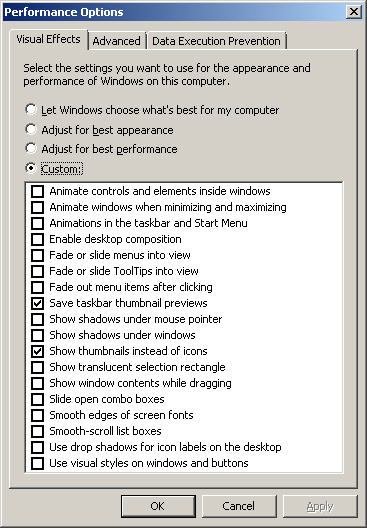 I recently had this problem, here is my solution:

I have some suspicions that the problem began due to low free disk space on the root drive (C:)

Thumbnail generation is initiated by explorer.exe, but applications can register themselves to create the thumbnail. An application simply has to implement http://msdn.microsoft.com/en-us/library/bb774614(VS.85).aspx as a COM object.

For instance, when you are installing the Combined Community Codec Pack you have the option of letting Haali (I believe this is the component) of taking over generation of thumbnails for video files. Thus thumbnail generation is the responsibility of Haali.

Search under HKEY_CLASSES_ROOT and you will see many thumbnail providers (for example XPS and Office Documents).

Not sure if this will work as obviously I can't reproduce the problem to test, however this is what I would recommend:

Select the primary hard drive (however you may want to do this on others after... but I think the following option only comes up on primary)

Next, Uncheck all boxes apart from "Thumbnails"

Hopefully this will clean out your thumbnail cache and force them to rebuild whenenver you visit a folder.

If this does not work, in folder options, try clicking on all the "Reset Folders" / "Restore Defaults" buttons as something may have gone wrong on a option that you cannot see.

After weeks of fiddling I finally just gave up and reformatted the machine. Problem solved. I have all the same applications installed/configured as before, but the problem did not return. Still a mystery I guess. I wish I had a better solution, but the best I can do is the old fashioned fix-everything reformat and start over.