Does Internet speed depends on processor?

I'm about to purchase tablet computer. My main purpose will be to browse Internet. So, please tell whether the processor speed has to do anything with the Internet speed. Different tablets have different processor speed like 1GH, 1.2GH, 1.3GH, 1.6GH etc.

Internet's speed is the rate at which you can transfer data over the Internet. As Jonas Wielicki wrote in his answer, this should not be affected by CPU speed, at least not in a noticeable way.

User experience will be affected, though, because when browsing World Wide Web (which are not the same as the Internet - the former means websites, the latter is a global network used to transmit those, but also to send any other data - file transfers, Skype calls etc.) actual display times are more important than download speed.

Fast Internet connections (either over Wi-Fi or cellular connections) are widely available today and download speeds for most sites aren't that important. Here's a screenshot from Chrome's profiler showing load time breakdown for SuperUser on my current hardware and connection: 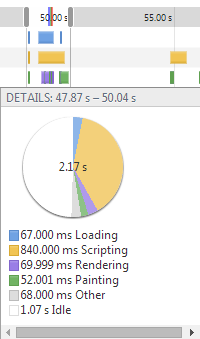 As you can see, loading takes only 67 milliseconds, while rendering, painting, running scripts and mysterious other tasks add up to one second. Downloading makes only a fraction of entire load time, as clearly visible on the pie chart. Other steps of displaying a website heavily depend on hardware, so CPU will matter when browsing.

So hardware is important if you're going to use that device for browsing WWW. There is no mobile CPU that will be definitely "fast enough". The higher the frequency is, the better it will perform. Number of cores also matters. Other factors may limit the CPU, like amount of RAM, its speed, storage memory's speed, operating system version and modifications applied by manufacturer.

Not for speeds you currently get via wireless, if you don’t end up having a extraordinary bad wireless chipset.

Machines with about 1 GHz may have problems with gigabit speeds and bad ethernet chipsets (I have heard such reports from people with homeserver systems), but wireless is still some factors away from that.

Mobile internet is even farther away from gigabit speeds, so no issues should occur here.

If you are running TCP speed tests it has a lot to do on your CPU.

If you have an old CPU and its maxed out at 100% the test would not be able to show you the full speed you could receive. Run on a new CPU and it will show better numbers.

Again this is just when you run speed tests, the internet would always be the same speed as you receive it from the ISP, it just means some computers can not handle the JAVA, Flash downloads.

CPU makes a huge difference, unless it's my RAM...not sure, but the difference between these 2 machines is absolutely phenomenal, I'm talking up to 4 times fast

Mega difference, now is it the RAM or CPU? Not sure, but it doesn't take ram to open up single pages I think, and I did tests with both machines idling at under 2 gigs or RAM

It will definitely affect the download and upload speed as the processor will be required to crunch all that data and process it to be shown to u accordingly using various softwares like Java etc. even the latency affects your PC performance try uploading and downloading while using a data crunching software. And u will get different speeds using different devices at the same location. So even a minor change in the configuration will be reflected. Try testing it on two different devices at the same time and u will see a the difference

I have tested the CPU effect on Internet speed myself. I tested a single core desktop, duo core laptop, quadcore cellphone, and quadcore tablet, same specs on the phone and tablet.

The desktop single core had 4 gigs of RAM. The tablet and phone quadcore have only slightly more than 1 gig of RAM, and they are both almost maxed out. So CPU is the only major factor.

As for the duo core laptop, it has similar download speed to the desktop, but maybe about 5 mbs faster.

My desktop, laptops AND Smartphones can utilize 98 Mb/sec of my cable's 100 Mb/sec throughput modem, but tablets, and Chromebook (Android ~ but so are Smartphones ?) only obtain 50 Mb/sec download. This is true for 2.4 MHz or 5.0 MHz wi-fi...... Smartphones and Laptops are as fast as hardwired Ethernet on desktop!