Local cable installed a 120 foot cat5e cable from our router to our smart TV, but there was no connection, so I decided to terminate the cable again myself. I bought a crimper and some RJ45 connectors. I terminated both ends and now receive a connection (before there was none at all) however when I run a speed test I don't receive speeds greater than 6 Mbps, which is odd because the other computers in the house, which are hardwired, receive above 60 Mbps consistently.

Am I crimping it wrong? Too tight? Perhaps the cable wasn't made to be used for such distances?

Images of my two terminated ends: 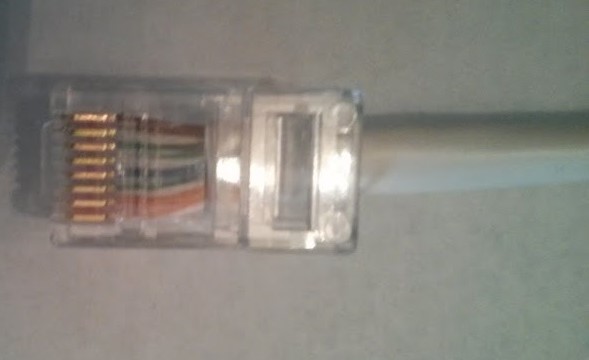 Modern ethernet can run up to about 300 ft. Because re-crimping did help a little, the next step should be to try it again. If possible, you should try to use an ethernet cable that is known to work so you can completely rule out problems with your network or TV.

Cat5e cable can come in both stranded and solid-core varieties, and there are slightly different RJ-45 connectors for each type. For best results, make sure to buy and install the right type for your variety of cable. It's the "teeth" that pierce into each individual conductor that are of different designs for stranded vs. solid. There are also "universal" RJ-45's that try to be "okay" for either kind of cable, but probably aren't great for either.

Be very careful to keep the right twisted pairs together when crimping your cable. Here are the pairings:

Not the answer you're looking for? Browse other questions tagged networking cable rj-45 cat5e or ask your own question.