bash terminal that remembers its state when restored from a crash

In Ubuntu, I use the default gnome-terminal to run my commands. I typically have a couple of windows open, each with several tabs. When my OS crashes∗, for whatever reason, and I reboot, I lose all these terminals.

Sublime Text, Firefox and Chrome have spoilt me, as all of them give me the option to restore all the windows and tabs to exactly what they were doing prior to the crash, and I would like to be able to do the same with my terminal windows and tabs.

How can this be accomplished?

Spelling out the specifics of what I would like:

∗ Ubuntu running on a laptop whose drivers are not the most friendly, happens more often than I would like (in case you are wondering)

The closest they could get was.

You can use the following options:

To load it back: 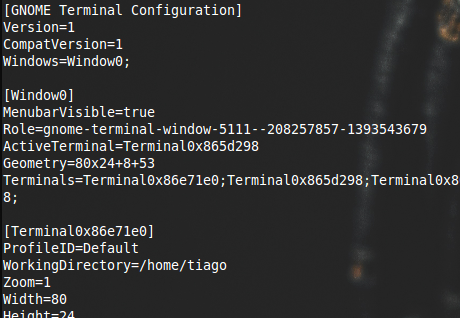 Here is the solution that I came up with:

It is a shell script that automates the above.

After a crash and reboot:

Not the answer you're looking for? Browse other questions tagged bash terminal session-restore or ask your own question.

3
ubuntu, issues using & on the command line
1
Looking for a powerful, user friendly terminal emulator based on ncurses
2
Is there a tab-enabled CLI for Windows?
4
Can bash (or a terminal) auto-complete (tab-complete) from terminal buffer contents?
6
Source new .bashrc in all open terminals
3
Open multiple terminals in a for loop in bash
6
Save and restore terminal on reboot
0
Odd terminals splitting/panning - compared to IDEs/text editors