Set default/starting folder for Explorer in taskbar without duplicate icon on launch in Windows 8.1

I want to have an icon in Windows 8.1 Taskbar that opens Windows Explorer in a specific folder and does not create a second icon when I click the first.

I tried several approaches to do this:

If I recall correctly, I could do this easily in Windows Vista and Windows 7.

If it's space you want to conserve can you not just drag from your explorer window to the Task Bar to pin the location?

You can hide "libraries". This would make the default "This PC".

I did not yet find a way to get the windows 8 (not 8.1) behaviour back. In plain windows 8, you could change the start-in directory (what you're refering to) to anything you'd like. My current workaround is not perfect, if anyone has further suggestions, i'd be thankful.

Create a batch file somewhere on the system, for example at

You can't pin a batch file, so we need a little two-step-trick:

After pinning that shortcut, you can delete it, but don't delete the .bat file. You can also change the icon of the newly pinned shortcut.

Disadvantages of the current approach:

I found this works pretty well for Windows 8.1: 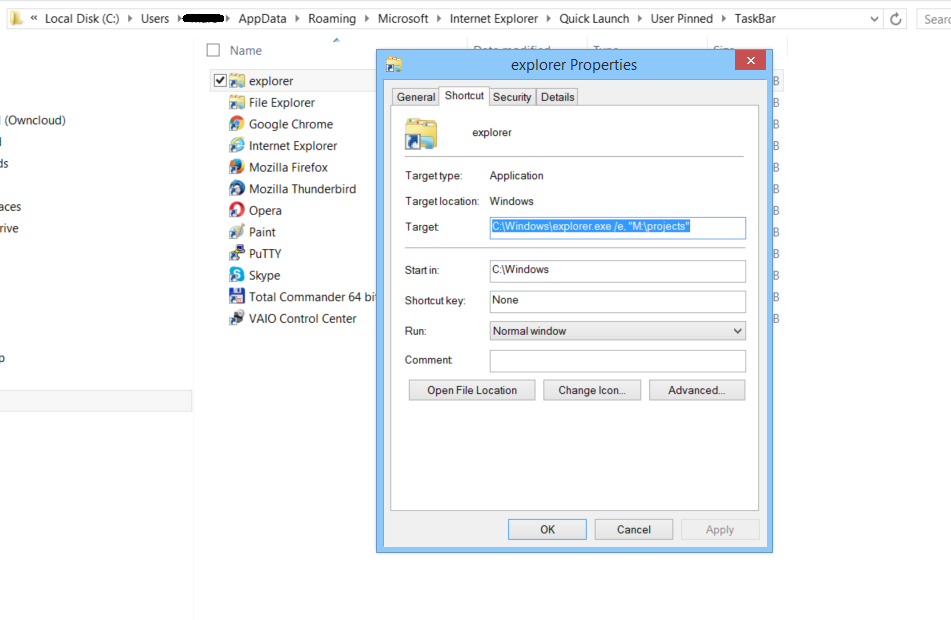 I found a way.
First you pin folder you want to Start Menu, then go to Start Menu, right click on it and select pin to taskbar. Folder is now in taskbar. Remove shortcut from Start Menu and thats it!