How to know which DNS servers are resolving my computers requests?

My Win7 box is erroneously resolving a IP address.

So when I do an ipconfig /all it says the DNS servers are indeed pointing at Google but on any other outside system this resolves just fine, internally however it does not.

When I do a tracert it resolves to the wrong address as with a Ping.

When I say the wrong address it resolves to the correct server but Im using a secondary IP on the server for a website and it's resolving to the servers primary IP not the secondary so the site 404s "only on this machine" so it's not a server setup issue.

Ive checked the Hosts file in etc/Drivers and no entries are in there.

The machine itself it on a LAN, not really sure of its status, I dont think it's being controlled by a domain as it's just in Workgroup>Workgroup with no DOMAIN prefix as I would normally expect.

Use the following DNS server addresses

So my question is what else could be overriding the resolution of my domain name to the proper IP address between my machine and the internet.

I should also add that if I put an entry INTO Hosts file for the domain >> IP it will resolve correctly. So it's not being "absolutely" overridden / hijacked.

Using NSLookup I get the following for both my domain and even just for www.google.com

It would seem that 1: The machine is using IPV6 by default (is this normal?) and 2. it's not resolving properly via Google Public DNS on IPV6

So if 2 is correct ,would this mean the machine will fall back to using LAN DNS settings?? 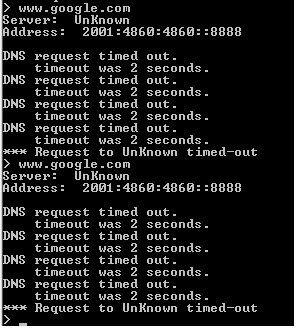 use nslookup to troubleshoot:

Released with Windows 2000 and later versions, Nslookup is a command-line tool that lets you test and troubleshoot Domain Name System (DNS) resolution. To start nslookup, open a command prompt and enter nslookup, see Figure A. Nslookup will display the machine's default DNS server and IP address. You can now enter nslookup commands. Enter help at the nslookup prompt for a quick list of commands. 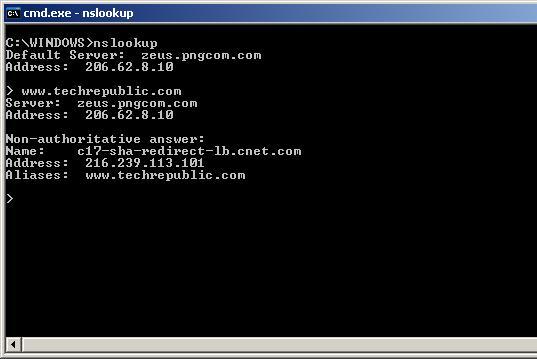 26
How do preferred and alternate or multiple DNS servers work?
8
Why does Windows 7 try to resolve DNS against IPv6 DNS Servers?
0
Google DNS precludes use of local servers
4
Domain suddenly not resolving on ISP's default DNS server
2
How to know primary and secondary DNS servers for IPv6?
0
Do ISP know which DNS Provider I use?
4
How to properly test a local DNS server locally?
1
Why is Google DNS resolving to a different server?