I recently picked up a Crucial M500 240GB SSD (20nm NAND) and I'm trying to figure out the best way to partition it. Currently, I'm using fdisk -cu starting at sector 2048.

I believe the nand page size is 16KB.

I cannot find anywhere what the nand erase block size is for it.

Does anyone know the answer to this or general advice on partitioning this particular series of SSDs?

This information is sometimes published in SSD manufacturer specs, but other times it's not there, especially for CF or SD memory cards. Short of using Google to search for someone else who has done the research, you can try to estimate it yourself using FlashBench. Download it here: https://github.com/bradfa/flashbench

This tool does random reads on an SSD and will plot a table showing the read times. (You should have done some writes to the SSD already, because reading all-erased pages is often simulated by the controller chip.) By looking for breaks in the time by block size, you can infer what the erase block size is. Here is a sample from the README:

This is a simple read-only test doing small reads across boundaries of various sizes. Example:

The most interesting number here is the last one, the difference between the second number and the average of the first and the third is 324 microseconds. These numbers all stay roughly the same for all units between 4 MB and 128 MB.

However, from 2 MB down to 16 KB, the last column has a much lower value. This indicates that whatever the memory card does on a 4 MB boundary does not happen at other boundaries. The educated guess here is that 4 MB is the erase block size, also called the segment or allocation unit size. This erase blocksize will need to be used in other tests following this one.

Similarly, both 16 KB and 8 KB boundaries are special. The logical explanation for this is that the card has 8 KB pages, but can use multi-plane accesses to read two 8 KB pages simultaneously.

Some cards only show a clear pattern using accesses with certain block sizes, other cards do not show any pattern, which means that the numbers need to be determined differently.

Also, cards that were never fully written may show a different behaviour because access times on pre-erased segments are different from those that have been written.

Another attempt is to align on a boundary that is a multiply of any practical block size.

With this concept, it is most common to align on 1MB boundary, so it won't matter if the block size is 4 or 16kb; all of these will be mulitplys of 2 and below 1M so aligning on that boundary will fit them all.

However, applying this concept depends on what you are aligning; loosing 1MB at the start of a mass storage device is totally acceptable while loosing that many times in a different scenario might not be.

The erase block size has no bearing on alignment, and the M500 supports garbage collection, so performance is not an issue. Please refer to the 2nd page of this PDF from micron's site which will help you determine erase block size based on the NAND used in your M500.

as far as alignment advice, please check out this fantastic Superuser Post.

Here's the screenshot of the page: 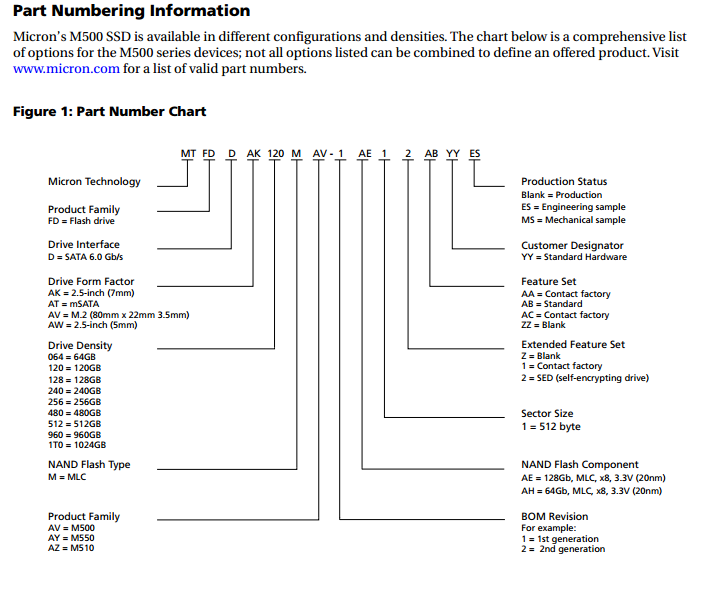