According to this question I have the following problem:

I want to use some Excel function (not the cell formatting) like TEXT(A1, {date_pattern})

But the person who answer my previous question make me found that the date pattern change according to the Windows Regional Settings.

However, my OS (Windows 7) is in English and the Office suite as well. By looking in my Regional settings it show even a pattern using English notation (dd.MM.yyyy) 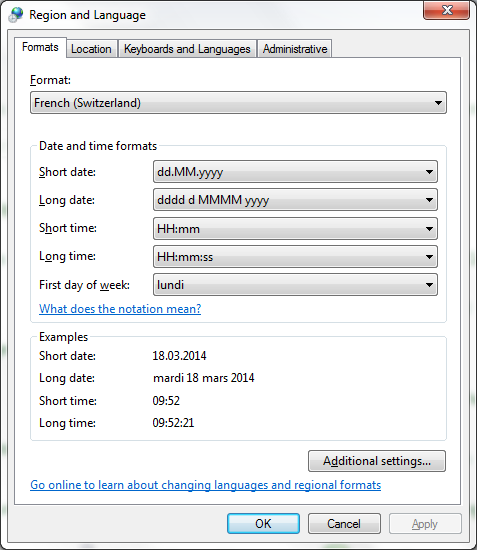 I want to know if there is any way to disable such behaviour from Excel, meaning I want to always use the English patterns and never the localized ones because I do not want the behaviour of my Excel sheet to change according to localisation of the reader.

A simple case would be reformatting some date field to a computer centric way like this: "yyyymmdd_hhss" this is recognized universally and can be sorted up and down easily. But as I am in the French part of Switzerland part I should write "aaaammjj_hhss" and if I send this Excel to a colleague in Zürich he would not be able to see the proper date as he got the Swiss German localization (his excel would expect "jjjjmmtt_hhss")

We were clever enough to install all windows and office in English but we still face problem like this because this link to the OS regional settings.

For me the changing Windows Settings is not an option because all the other programs are using this settings.

This question is a bit old, but to date it does not seem to have an answer. I've also seen similar questions on a number of sites, but have not yet found any answer that involves only built-in Excel functions. However, it is quite easy to solve this with VBA. You don't even have to know how to program to do this, because the required function is so simple.

With your workbook open, simply press Alt+F11 (to open the VBA editor) Then Click the menu item Insert > Module In the new VBA module, enter the following:

What this does is simply use VBA's own Format function instead of Excel's TEXT function. This is exactly what you want.

This new function will format any date (or number) according to whatever format string you specify. It will interpret the format string using the standard (en-US) notation, regardless of the operating system's regional settings.

By the way, you can name the function whatever you want. I chose FMT because it was short and because the function can format both numbers and dates. But you can choose something more descriptive if you want. Just remember to use the same name in your worksheet as in the VBA code.

Note that the VBA format strings are not exactly the same as Excel's custom format strings (for example, use "n" instead of "m" for minutes), but they are very similar. Look here for details, or search MSDN for "Format Function (Visual Basic for Applications)". Scroll to the bottom to see the various date format specifiers.

Another approach that also uses VBA, but might actually be easier to maintain, is the following:

This allows us to "inspect" the cell you originally formatted ($A$1) to retrieve the localized format-string. That string will represent the same format you applied, but it will use the correct letters for TEXT to interpret ("j" instead of "d" for example), so the displayed value of the dates will be constant across all locales. If you wanted to use only one date format for your whole workbook, you would only need to do steps 1-4 once. Then repeat step 5 (the TEXT function) in all the cells where you currently use it, but instead of hard-coding a format, you would simply reference the cell that contains the localized format-string ($B$1 in the example instructions).

Note that the second argument to GetFormat tells the function whether or not to return the localized version (which depends on regional settings) or the "standard" version (which is always based on en-US).

Here are some screen-shots that might make this more clear.

The results for the English (US) case above are not very interesting, but you can compare them with the following results that were obtained by changing the Regional Settings of my operating system to various other locales. Importantly, note that by using GetFormat in combination with TEXT we are able to retain a constant result for numeric formats (those that do not include day or month names) across all locales. And by constraining the language using an LCID (as in row 5) we can even retain a constant format when including day and month names as well.

This method works for most locales, however it should be noted that the scripts used to represent the Hindu-Arabic numerals are NOT the same in all locales. Therefore regional settings like those of the Nepali (India) locale will result in date formats that "look" different than en-US dates. But these actually are in the same "format" in terms of the positions of numbers--they just use different symbols for the numbers.

For dates you can actually define a format that makes Excel use a certain locale. If you set the number format of the cell containing your date to something like

Excel will display your date in a US locale (hex 409)

Gotcha: The YMD notation is localized and thus turns to JMT on a german system for example. So you might have to adapt the format string to your situation but i would expect it to behave like the formulas (autotranslate) on systems using a different language (as you seem to be aware of).

Even though this question is a bit old, I came across another (simple!) solution and am posting here for the sake of completeness/reference.

A simple way to solve the Excel locale date format problem is to use the CHOOSE function:

In these examples you will get the Day and Month in letters without using locale formats like "Mmmm" or "Dddd" or "Jjjj".

If your reference date is in cell A1:

A very simple way to avoid the whole mess is to create a list of days of known dates, and use the list in your function.

I have now used a similar logic to the Method 2 given with the Macros. The Macros work, but usually when you send a file from one organization to another, the macros won't make it through the exchange or the antivirus won't let them run. So I have simply renamed ia cell as dateformat. In this cell I have simply entered the text dd/mm/yyyy. So when I am using the text function I am using the cell name for the format e.g. =text(C1,dateformat) and it seems to be working (precisey for Switzerland it works).

Just dropping in another imho elegant alternative taken from: Stackoverflow answer by @Taosique

I know, late to the party, but looking into this myself I just found a working solution on ExcelBanter which doesn't need VBA.

The way to go is use the old Excel v4 macro system. It can still be accessed via named ranges or v4 macro sheets. It was a learning experience for me as well; a page on Excel off the grid and one on Ron de Bruin's site were nice introductions. The latter also has a link to a workbook with the same solution in it.

Basically, the old Excel v4 macro function GET.WORKSPACE can be used to get meta information about a lot of things, including the localized date format in use. GET.WORKSPACE(37) returns an array of all characters used for all sorts of separators etc, where index 19-20-21 hold the letter used for year,month and day formatting. So using INDEX(GET.WORKSPACE(37),19) returns "y" on English language settings, "j" on Dutch and "a" on Spanish. Combine that with a REPT to generate the 4-letter code and you're done. Problem is though that the old v4 functions (like GET.WORKSPACE) can only be a used by v4 style macro sheets and named ranges.

For a formula and macro-free solution, format the cell (Ctrl-1) as a Number->Date.

The first two listed format types on non-US locales -- prefixed with an asterisk -- localize automatically depending on where the document was opened and undoubtedly map to the VBA Format() "Short Date" and "Long Date", i.e., to whatever has been set in the Windows setting Region Date Format. The other formats do not re-localize (according to the help text).

So if you wanted to use fixed US English format, you would select Locale->English (United States) and e.g. 14-Mar-12 in the Format Cells dialog box.

Note that the English (United States) locale has a ISO8601-style date format yyyy-mm-dd, which was designed to be unambiguous across locales.

I can't believe nobody has offered up the named formats as a solution.

If you format a date and enter =TEXT(A1,"Short Date") it will automatically use the proper format based on the regional setting with zero issues between regions.

"Long Date" is also an acceptable entry and will work seamlessly across regions. It will also convert back to a proper date in VBA with cvdate regardless of version used.

Not the answer you're looking for? Browse other questions tagged microsoft-excel-2013 date-time text-formatting localization or ask your own question.

7
Excel TEXT function does not work properly
3
Excel subtracting dates does not work, see description below
0
why add a dollar sign to a vba function
1
Excel date format changes with different regional settings (2020-08-01 to 2020.08.01)
0
Excel Chart - show data formatted regardless the local settings

0
Windows 7 boot manager not localized on UEFI system
3
Excel - Convert dates and currency as text to Excel dates and numbers respectively
1
How to use DATEVALUE with diffent locale setting without changing system settings
16
How to make date YYYY-MM-DD (ISO-8601) the default in Excel?
2
Why does Excel not recognise and format dates consistently?
1
Excel's month function outputs dates in dd-mm-yy but excel then reads dates in mm-dd-yy
1
Excel: Default Date Formatting in Workbooks