Scheduled task works on a mapped drive when configured for Windows XP mode, but not for Windows 7

There is a Windows 7 PC with a scheduled task. The only thing it does is running a VBS file located on a mapped drive that points to a network share:

where M: is the mapped drive.

The task is set to Run whether user is logged in or not, and it has saved credentials for user who has access to that folder.

Now, if I select this in the dropdown: 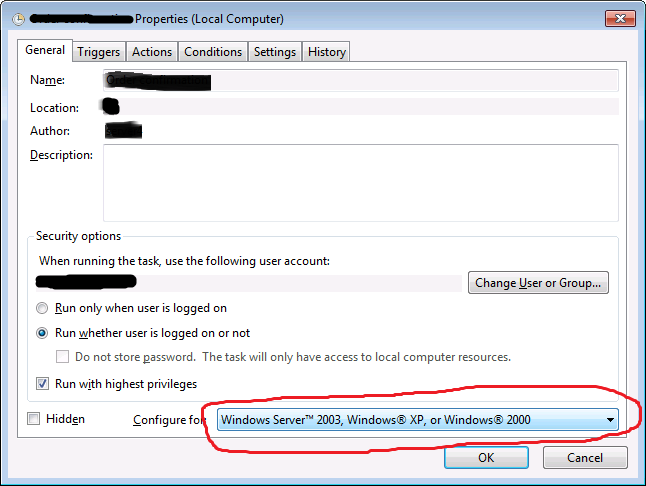 then the task works. However if I select that:

then it fails with code 8007010B (which, as I understand it, is "Directory name is invalid"). It fails whether or not someone is logged in, and regardless of what triggered the task (the schedule or the user who Run it manually). It also fails if I log in to the computer as the user under which the task is supposed to run and Run it manually.

When I'm logged in as the user under which the task runs, I have access to the mapped drive and can run the script with Explorer no problem.

Apparently there is some compatibilty shim kicking in, but which one? And what do I do to make it work when 'configured for Windows 7', which should be the native mode for the computer?

I would just leave it as is, but if someone mistakenly 'upgrades' the task to the Windows 7 mode, there is no way back: the Windows XP option is then removed from the menu for that task. To have it back, one needs to export the task as XML, delete it and reimport.

When the task runs, the M: drive map doesn't exist in the context of the user/session the task is being run as.

Either reference the network location by UNC, or modify the task's script to map M: to the path before performing the rest of its work.

@Ƭᴇcʜιᴇ007 is correct. Running the script using "Run whether user is logged on or not" uses a system session and cannot see the drives of the physical user session.

Another solution is to create another task which uses the same user account and uses the same "Run whether user is logged on or not" selection. This task would be solely used to map the desired drives that your other Scheduled Tasks rely on. The drives will stay mapped in the system session and allow your other tasks to see the same mapped drives. I trigger this task that runs a batch file to map drives for the system user every 5 minutes.

According to this thread, you need to add the same path into the "start in" box. Add M:\Folder\ to the start in box and it should work fine.

Not the answer you're looking for? Browse other questions tagged windows-7 scheduled-tasks windows-task-scheduler mapped-drive or ask your own question.

5
Scheduled task to map a network drive runs, but doesn't map the drive
2
VBScript in Windows 7 64bit Scheduled Task - Works with only run when logged in
4
Command works from command line, but not from Task Scheduler
1
Mapped Drive inaccessible from Windows Scheduled task
3
Mapped drive is not accessible, to copy files, using Task Scheduler
0
executing script manually works, but not in task scheduler
0
Run scheduled task only if mapped network drive is not present?
2
Notification Icon and GUI Missing for Scheduled Admin Task, on Win 7