Why half of my RAM of 8GB is missing?

Have been sitting with 8GBs of RAM for 2 years still thinking I needed another 4GBs and never questioning why so often I get message about low physical memory that would close all open programs (Firefox mostly since it is mainly what I use) if not paid attention to immediately. I would then have to restart programs using most memory (Firefox is one of them) to continue working normally and not losing any unsaved changes.

Anyway, II have noticed that although system sees 8GBs of RAM, it still uses half of it and I will demonstrate this with screenshots further. 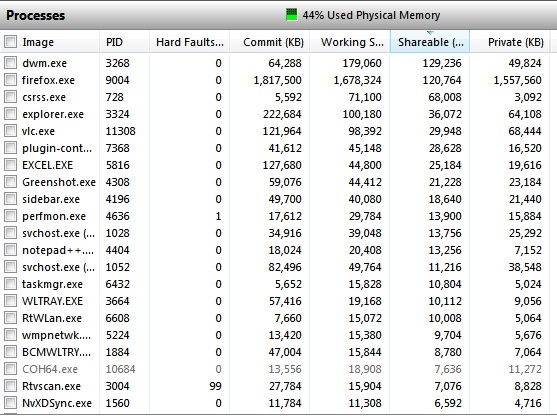 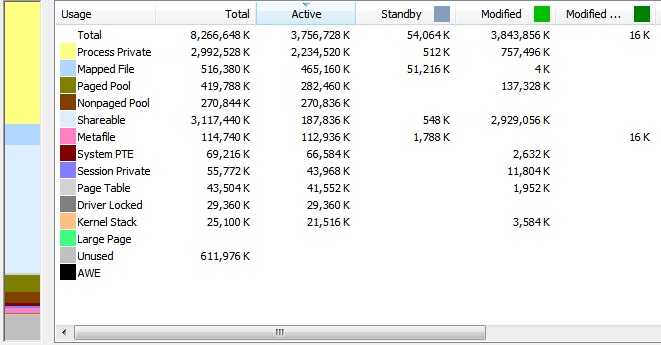 And finally my swapfile condition at one time and another. The point is that it is big all the time: 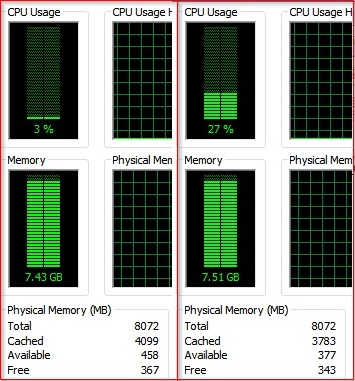 Notice "Available" and "Free" memory from above screenshot. This is what I see in Task Manager most of the time and opening another 5-7 tabs in Firefox causes "Low Memory" warning to appear. 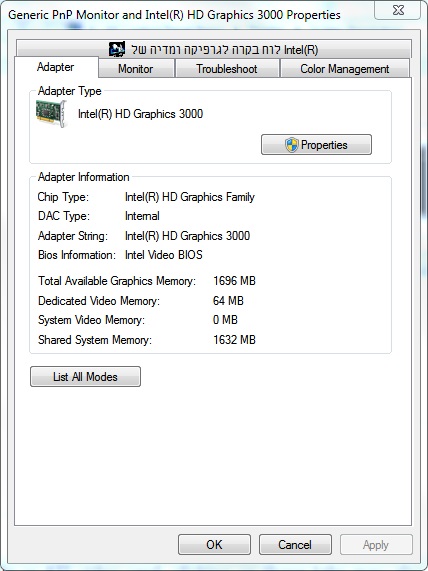 WLTRAY.EXE has not been mentioned here but look at this: 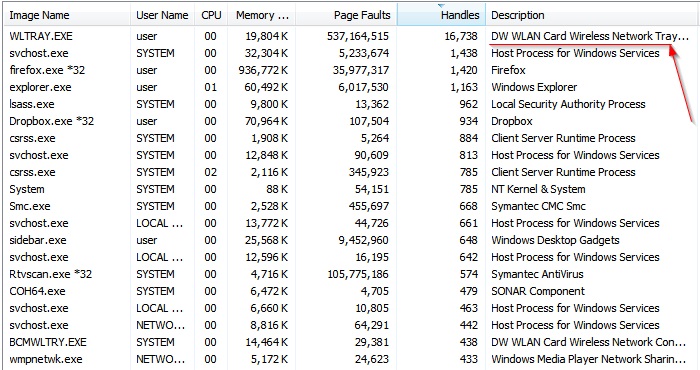 UPDATE 3rd May, 2014 - I don't think problem was in wireless adapter process. I still think it has to do with Firefox. Here's screenshot of Task Manager: 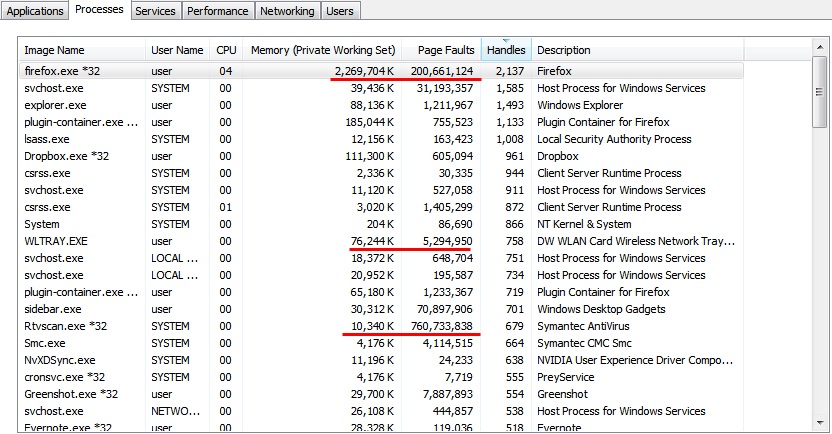 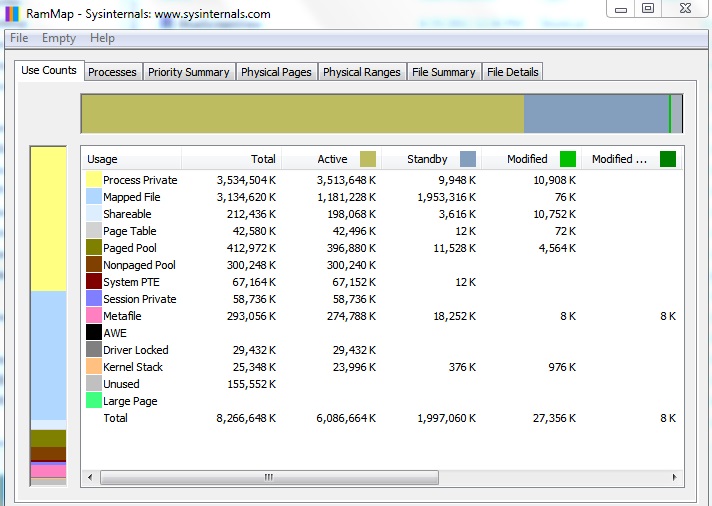 Looks like my whole system has memory leak. I tried using Chrome and eventually like with Firefox, it crashes with either message seen here or results in BSOD or blank screen where restart is the only way to work again.

Here's my Chrome browser running after several hours of last it's restart, with 29 tabs: 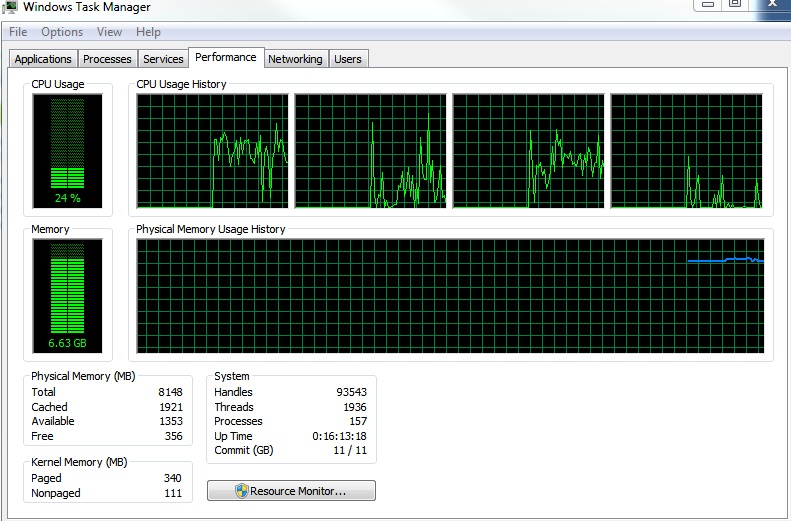 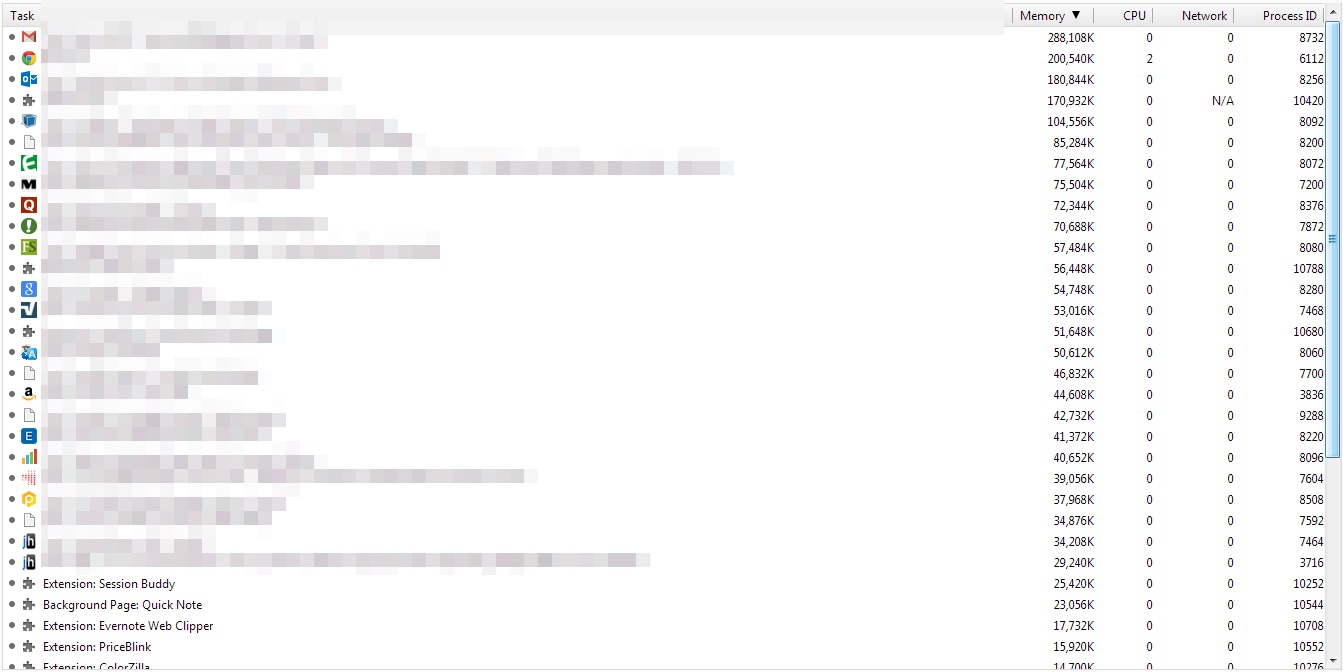 I have restarted Chrome and here are stats: 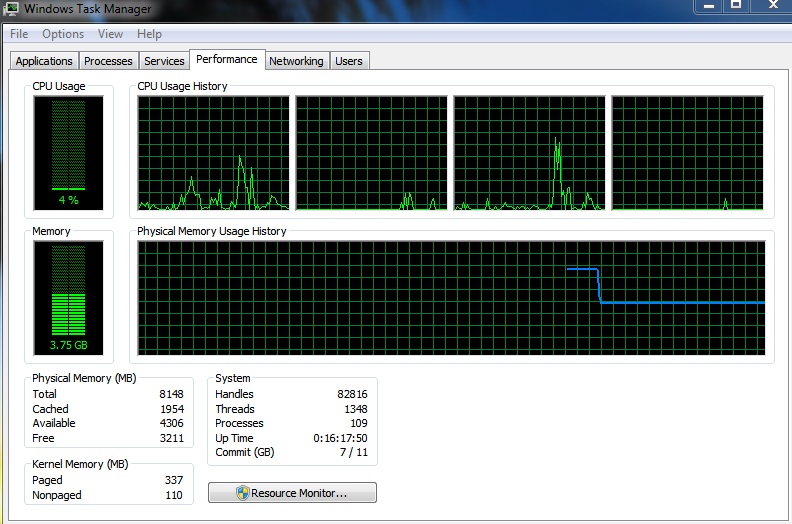 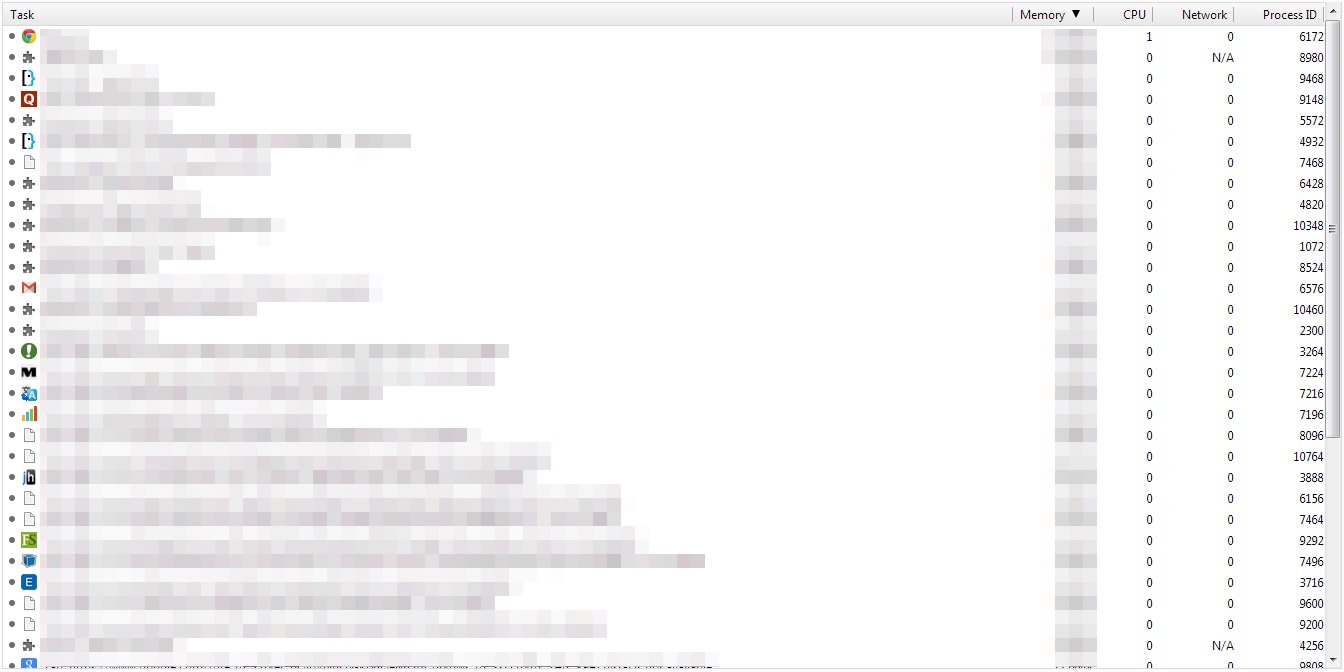 It is not missing, nor is it even unused. Approximately 4GiB are in active use, and an additional 3.3GiB is inactive, but also in use. The 3.3GiB is ready to be paged to disk, but you have no space allocated for it, so it remains in physical RAM. "Modified" memory is effectively no different than "In Use" if starved of disk pages.

Neither a 64-bit OS nor PAE enables any 32-bit process to use more than 4GiB (2 user/2 kernel on 32-bit/PAE, 4GiB user on x64. See: Pushing the Limits of Windows: Virtual Memory) of memory whether that memory is currently paged into physical RAM or onto disk.

So, for Firefox, which does not have a 64-bit version, this means that Firefox is ultimately limited to 2GiB (PAE) or 4GiB (x64) of user space memory regardless of installed RAM. Even if you had 64GiB physical RAM installed, if Firefox exceeds usage, it will exhaust its memory limit.

This looks excessive and possibly indicative of a memory or handle leak. Worse, in your case, the pagefile is not large enough to move any of the leaking process to disk, so you have essentially forced it to leak exclusively into physical RAM.

In TechNet article Having a problem with Excessive "modified" memory usage in Win7 x64, upwards of 3.6GB, any suggestions?, a user with similar symptoms (large shared/modified block) finds:

Modified memory is memory that was allocated by some application and then removed from the application's working set, usually because it hasn't been used for a long time. The fact that most of your memory is in this state means two things:

In the end, as suggested by magicandre1981, the issue was the Dell Wireless (Broadcom) LAN tray app:

Thanks everyone, I was having the same issue and added handles and GDI and saw BCMWLTRY.EXE, the Dell wireless tray util, is creating handles nonstop. Thanks for the advice. Update: So I disabled the service that started BCMWLTRY.EXE + rebooted and I'm now not seeing the handle leaks. WLTRAY.EXE is still running but it's not leaking handles.

Dell wlan utility was the reason. Killing the bcmwltry.exe process in task manager released memory. But this process initiated again after few sec.. It was kinda crappy - i couldnt uninstall it. Luckily this notebook needed OS change anyway so i`m not even trying to fix this. ... Same exact problem here. Killing and disabling DW WLAN (bcmwltry.exe) freed up 5 GB of memory. It leaks.

The tray app BCMWLTRY.EXE is likewise implicated in Pagefile keeps growing until I run out of memory

So, it's not actually the driver in these cases, it's the tray app that comes with the driver. I would agree that given the OEM of your wireless card, that BCMWLTRY.EXE is running, and the rather large number of nearly identical problems, this is part one of the problem.

You can also add the "Handles" and "Page Faults" columns to Task Manager to check for excessive usage of either, in the case that there are more errant programs. You can use SysInternals VMMap to view allocation of virtual memory from the point of view of each process. Handle leaks are insidious because they are also likely leaking Windows objects. Microsoft makes available a tool called Application Verifier that, among other things, will help track down leaking handles.

So the answer is: You likely have a memory leak, it is likely in BCMWLTRY.EXE (or some other app leaking handles or similar shared resources), and the OS has been starved of disk backed pages to more "gracefully"* handle such a condition.

* There's nothing particularly "graceful" about a memory leak, but a ~4GiB pagefile would have allowed the process to run up to its inherit limit (acting as a quota) and then crash, creating a obvious pattern in the event log of a specific process crashing followed by a release of all the resources and, if restarted, repeat. Without the inherent 32-bit limit address space limit, it could have chewed through a lot of disk space first. As it is, all the processes are now resource constrained, so it's less clear if it's being closed due to its own leak (Firefox), or because another app (BCMWLTRY).

Your modified memory list is too high (see the large orange bar in ResMon). This is using over 3GB RAM. One known cause are old Broadcom Wifi drivers. If your laptop uses a Broadcom Wifi adapter, update the drivers or stop the BCMWLTRY.EXE from startup with msconfig.exe to fix it.

I had a prank played on me some time ago where somebody had edited my MSConfig settings, limiting my maximum memory, like so:

So this is another potential cause.

Your system is using all of your 8GB of RAM, it just not using it as efficiently as you would wish. I see a huge amount of cache on the system. Windows will automatically decrease the cache size as applications need more RAM.

Regarding page files size, I'll quote someone (Mark Russinovich) who actually knows what they are talking about:

How Big Should I Make the Paging File?

Perhaps one of the most commonly asked questions related to virtual memory is, how big should I make the paging file? There’s no end of ridiculous advice out on the web and in the newsstand magazines that cover Windows, and even Microsoft has published misleading recommendations. Almost all the suggestions are based on multiplying RAM size by some factor, with common values being 1.2, 1.5 and 2.

If you want the know the real truth of what is happening on your system then just stop right now and read Mark's whole series of articles on Windows memory management. He's probably the worlds foremost authority on this sort of stuff.

I myself set the absolute minimum page file size on my Windows systems (just enough to save a mini dump) or even disable it entirely. You never, ever want to hit that page file during normal system usage. If you do then it's time to buy more RAM or close some apps, you choose.

Do you really want your RAM to get semi-randomly shuffled off to a storage device that's 1K times or 100K times slower than RAM just because you didn't have enough RAM?

Another point that I haven't seen anyone bring up is that the Intel HD Graphics 3000 chip uses "shared memory" From the screenshot you show of it, it can consume as much as 1.7GB of your RAM. So kiss at about 1GB of your total RAM goodbye there.

Your BIOS and drivers are fine and so is your physical memory. Messing with hardware and BIOS settings will get you nothing. The problem is your ridiculously small page file. It should be as large as your installed physical memory but it's 512 MB, barely 1/16th that size. To correct the problem, do this:

Choose the Advanced tab and click the Settings button under Performance.

Windows 7 aggressively caches information. This is largely what made it perform better than Vista. You still have oodles of memory free to use if your programs need it, it is just that Windows is trying to be clever, and guess what your computer is going to need or access next, so it preloads (caches) information into RAM that gets accessed a lot. Since Windows does not then have to search the hard disk for this information, this makes Windows run faster.

The simplest is to update your computer drivers, especially your bios and chipset. Just the fact that firefox is running so high, I would then do a deep scan to see if you are running any bots on your system, afterwards, i would disable plug-ins and add-ons one-by-one on firefox to see if it reduces the symptoms. It certainly wouldn't hurt to do what was mentioned since it should be a regular maintenance even though it may not solve your problem.

2
Windows 7 "lost" memory
1
Why does Windows 7 x64 take so much RAM after closing all the RAM intensive programs?
17
Computer doesn't use more than 4 of my 8GB of RAM...? (64-bit computer)
2
Committed memory in Windows 10 is very high even though Resource Monitor does not show any application with high commit
1
21% memory ram usage (1,7GB) in idle Windows 10, help for optimizing
2
Task Manager & Resource Monitor Does Not See Added RAM