Is it possible to disable the "Support for this operating system is ending" warning that the current version of Microsoft Security Essentials displays on Windows XP? 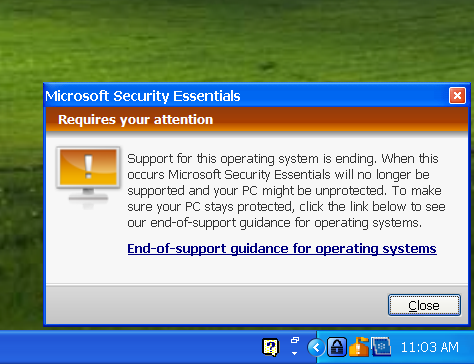 Based on a quick couple of searches, this warning appears to have been added in the KB2949787 update to Security Essentials, but I can't see a way to revert just that update.

Aside: Since I'm sure people are going to ask, here is why I want to do this:

The end-of-support pop-up notification can't be disabled, and downgrading isn't really an option: Microsoft Security Essentials (MSE) would upgrade itself again, sooner or later. While you could still try to prevent it from upgrading, there's no guarantee that the old MSE version would still receive updates as usual.

Considering the notification is generated by the user interface executable, you can override it with an earlier version while keeping the up-to-date engine.

As commented by @saulius2, the registry changes were detected as a tampering threat. My previous method has been abused by malware creators for malicious purposes, and that's why MSE complained about it. To solve this issue I've since switched to a different approach. In case you applied this workaround before, just follow steps 6-7 again.

Eventually you will need to switch to a different antivirus solution, as the MSE definition signatures won't be updated anymore on Windows XP after July 14, 2015. For the time being, however, the steps below should do the trick:

Note Although unlikely, make sure to repeat steps 6-7 should MSE upgrade in the future.

Source: Support for Windows XP for Enterprise Business is ending

After the 8th of April, the date support for Windows XP ended, the status became Red indicating "At Risk."

This is by design due to the fact that Windows XP end of support is 8 April, 2014.

As Microsoft no longer provides MSE for download on Windows XP, you need to rely on third parties who can provide the old setup package. Here are the basic details and hashes of the official US English (en-US) installer and the user interface executable (which is language neutral):

While different languages have different setup packages (hence different details), all of them include identical copies of the msseces.exe file, which has to be digitally signed by Microsoft Corporation, and countersigned by Microsoft Time-Stamp Service; both signatures must be valid. You can check them by opening the file properties dialog.

You can use any of these, or find an alternate source yourself. While the actual file name could be different, the other details provided above must match exactly.

Make sure to scan the files using your antivirus, and upload a copy to VirusTotal to feel confident enough. If possible, test the program in a safe environment first. When you're done, make a backup of the executable.

[MSE] also provides a registry [value] to show the current end-of-life status of the current OS if it’s near end-of-life. [It's called] EndOfLifeState [and is stored in] HKLM\Software\Microsoft\Microsoft Antimalware.

Stage 1: OS is approaching end-of-life. At this stage, the OS is near the end of its support lifecycle. [MSE] will still work as normal.

Stage 2: Grace period. OS has reached end-of-life, but anti-malware platform service is still running and definition updates can be received. For example, for Windows XP, the Grace Period stage starts on April 8, 2014.

Despite what the official source says, the third stage may happen sooner than expected: as the commenter KY noted, the anti-malware service will stop as early as June 15, 2015. Whether intentional or not, this was confirmed by my tests as well.

Funny enough, Microsoft pushes the new SE-version (4.5.216, with nagging screen) through automatic updates, but still has the previous version (4.4.304) available for manual download. I would not be surprised if they've pushed the 4.5-version only to XP-users.

Anyway, the solution is:

To remove an update go to Control panel. Under add and remove programs click show all windows updates. Then find your update and uninstall it. If that does not work try system restore.

Not the answer you're looking for? Browse other questions tagged windows-xp ms-security-essentials or ask your own question.