Equations cause wrong error messages in spelling check in Word, how to avoid?

If I write “Thus x is larger than y.” in normal mode in Word, no error is reported in spelling check. But if I turn “x” and “y” into equations (by selecting them and then giving the command Insert → Equation for example), in Word 2007 or newer, a spelling error is reported: space before punctuation. This is rather inconvenient, and the suggested “correction” would remove the space between “than” and “y”. 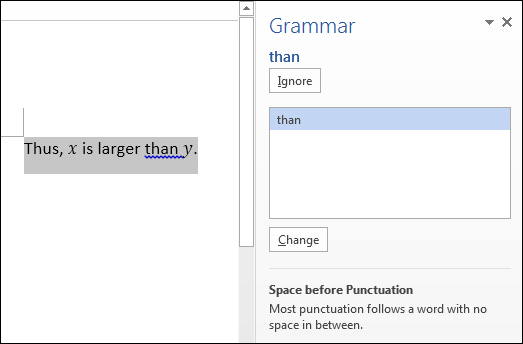 So Word seems to act as if “y” were not there at all. Is there any fix to this? Problems like this are frequent in mathematical texts when inline equations are used (and for typographic uniformity, math expressions should all be written as equations in text, if the equation tools are used at all).

I know that I can avoid the problem by putting a space inside the equation, so that instead of “...than [y].” (where brackets indicate a construct created with equation tools) I use “...than[ y].” It just sounds illogical and somewhat inconvenient (if an equation is copied, the space is copied in it, and in the general case, a space might be needed on either side or on both sides).

Word lets you insert what it calls a "no-width non-break" character via Insert->Symbol->More Symbols->Special Character. This is Unicode U+200C, known in Unicode as ZERO-WIDTH NON-JOINER.

If you insert one of those immediately before the "y" equation it appears to prevent this particular error from being flagged.

Not ideal, and when it comes before the equation, the character looks as if it's inside the equation "box" (although it isn't).

The OP has commented that it needs to be used carefully, e.g. because used after the "y" it may act as an optional line break, pushing the "." onto the next line.

If you are comfortable with it, you can turn off the grammar check for punctuation. This will prevent this "error message" from appearing, but will also discard other suggestions about punctuation (such as improper use of semicolons, etc.)

I am assuming the option is the same or very similar in Word 2013, which you are using. I am not aware of an option to disable this just for cases involving equations, and I don't think that it exists.

Not the answer you're looking for? Browse other questions tagged microsoft-word spell-check equations or ask your own question.

2
Word 2007 spelling and grammar check error
1
Modifying the shortcuts in Microsoft Word Equation Editor?
3
Adding a punctuation mark (comma, period) after a Word 2013 equation in display style
1
What determines the set of fonts that can be set in Equation Tools in MS Word 2007 and newer?
4
Character spacing in word equations wrong when printed
6
How to create vertical addition using the Word '13 equation editor
0
In PowerPoint 2013, short hyphens in equations change to long ones after reopening the file. How to prevent this?
0
Turn math autocorrect back on in Microsoft Word for Mac 2011
0
How can I divide a matrix into several parts using the \ eqarray command?