Every time I run some of my games, if the media player is open and playing, Windows 7 lowers the volume of both applications (the game and the player). All other applications are not affected. I tried foobar and Winamp, combined with several games, and it happened every time, which makes me think it’s a Windows 7 thing.

The volume goes down to inaudible levels (usually 3 or 4), and I’m forced to alt+tab, open the volume mixer, and increase both volumes manually every time.

This also doesn’t look like a bug, but some kind of feature. When it happens, the little bar in the volume mixer that shows each application’s volume level gets a little transparent (but stays in it’s regular position), while a new one appears and tells the new volume.

Anyone know what’s causing this?

(The games ran from steam, in case it matters)

Windows 7 automatically lowers speaker volume when it detects communication activity (A microphone-enabled game for example). You can turn this off though. 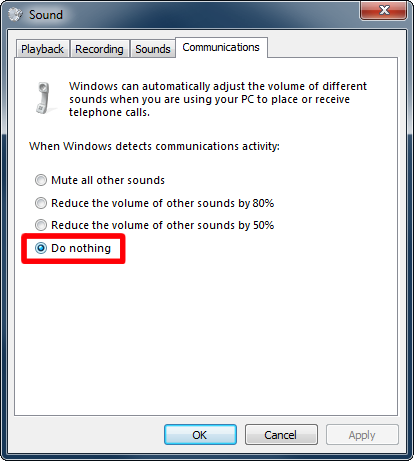 If this happens to you in Winamp when you play a MIDI back, you need to change the midi output device to DirectMusic

2
How do I fix the sound of my game when I start a Skype call?
79
Windows 8 turns program sound volume down randomly
28
How do I disable microphone volume auto-adjusting?
4
Volume key occassionally changes relative volume in mixer
4
Audio from VLC will get quiet when focusing other applications
2
Windows is Auto Adjusting Volume of Applications
0
Speaker sound volume drops when microphone is active
0
Windows 8 Communication Sound Setting not working
0
Volume lowers sounds automatically
0
Limited volume when using Bluetooth headset with computer
See more linked questions