I have a document that has the word "The" capitalised in many places it shouldn't be. I wish to change "The" in those cases, to "the".

I need to change any instances of "The" that are not at the beginning of a sentence, that is, a capital is being used in the middle of a sentence, for example, A dog bit The boy.

I played around with the following

Use the wildcard expression <The> and replace results with the -- This will change each "The" to "the". From there I had planned on finding the words that SHOULD be capitalised and changing them back to "The", thus keeping all the lower-case words where they should be.

That should set everything the way I want.

I ran in to the following issues:

How should I write this so that I can find the beginning of a sentence not on a new line? Such as selecting the second the in the following: A brick smashed the window. the nun was not pleased. 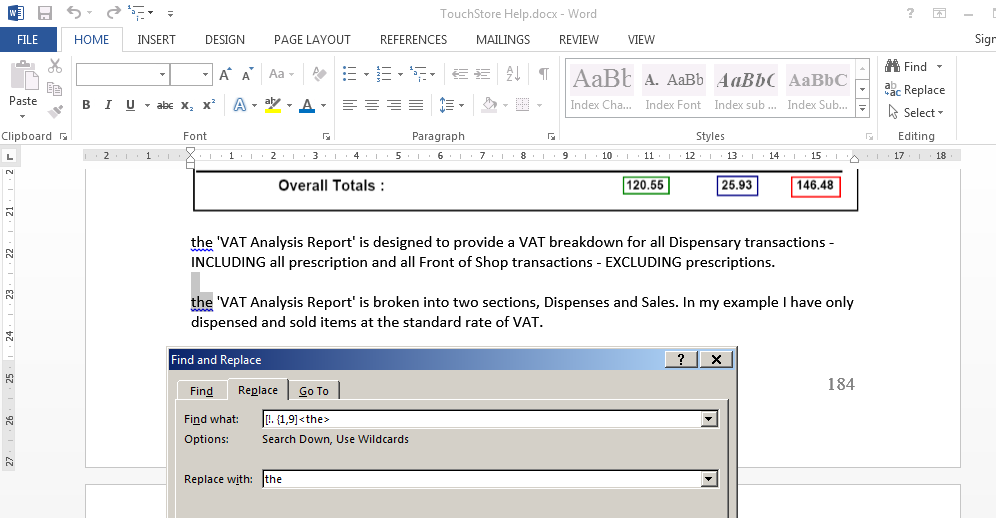 Why is it selecting a white-space with the text, and how should I alter it to only select "The" at the beginning of a sentence, and new line.

In regards to your issue with selecting extra spaces, the solution is to let Word select the spaces, but have it have no net effect on these spaces...

Add parentheses to the find, so that Word will assign variables to the sections of the search:

Then, in the replace with

This will substitute back in the spaces right where they were.

please help me with an example expression that finds only "The" when it is preceded by one of the following symbols -,*,: e.g * The.

Not the answer you're looking for? Browse other questions tagged microsoft-word regex find-and-replace or ask your own question.

2
Add constant value to numeric XML attribute
2
Word find/replace: add space to postal code with wildcards
1
Microsoft Word 2010 regex replace
4
Regex to select only specific number of spaces
1
exclude specific strings of words using wildcards
2
Don't match whitespace at the end of line
2
What Regular Expression Can I Use To Search And Replace The Following in MS Word?
0
Word 2016 use find and replace to add period after “et al”