How to automatically turn off the second monitor after a period of time?

Is there any software which could helps?

I'm not sure it's possible to do what you're asking directly in control panel and power options in Windows. But here is a software utility that will allow you to do just that. It's called MurGeeMon Dual Monitor Software.

Control Power of Monitor without looking for power buttons on Computer Monitor. MurGeeMon allows you to control power of Secondary or All Monitors connected to your computer. Secondary Monitor Power can be controlled with a simple checkbox to enable / disable secondary monitor.

You can read all about it here: http://www.murgee.com/MurGeeMon/

I have not tested it, so I can't promise it will work as expected. But seems to be just what you are looking for.

I have tested this software now. The description above is not very good. It says it allows you to control power of secondary or all monitors connected to your computer. Well... sort of... Namely, it does that by either enabling, or disabling the monitor. Not by putting it into standby as you would expect.

You will find these options under Monitor Control tab. 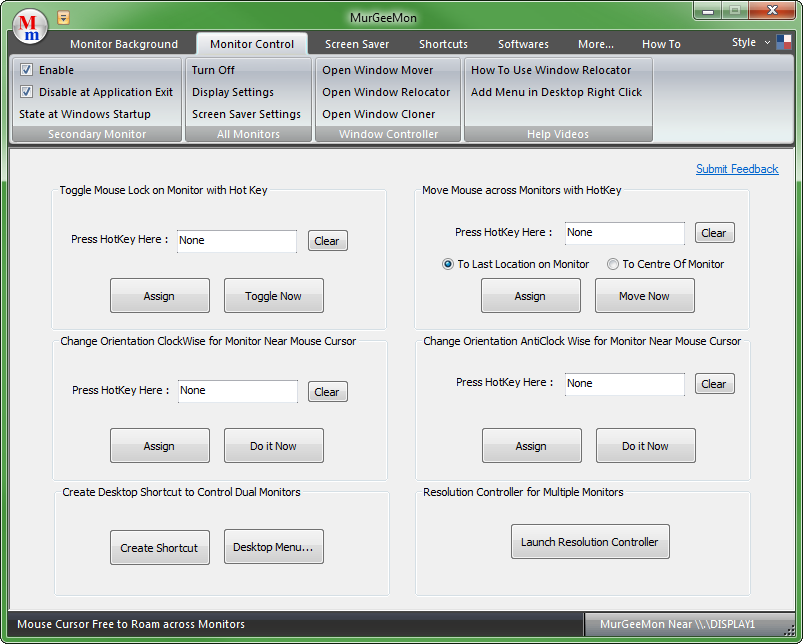 As you can see from this screenshot there are some useful features for multi-monitor setup. But the only one concerned with turning that secondary monitor off is located in the section Secondary Monitor. If you uncheck the "Enable" option it will simply disable the secondary monitor. That might work for you, but not as you expect. Because, you have to enable it again when you want to use the secondary monitor. And disabling and enabling the monitor will probably rearrange your desktop icons. It is not convenient, takes time to enable and disable monitors, and it effects your workspace.

In the All Monitors section there is the option "Turn Off" which in fact sends the monitors into standby as soon as you click that (no timeout). But it does that for all monitors, and not just the secondary monitor.

I have done some research and apparently, you can't do what you're asking for. Not in Windows, not even if you are running the latest Windows 8 version. And there are no third-party software applications that would allow you to do that (I could not find one, and others have also failed to find one). Most of these software applications for controlling multi-monitor setups are based on enabling and disabling monitors. They can't control individual monitors, i.e. send a selected monitor to standby.

A similar question can be found here: Put one monitor of a dual monitor windows system into standby

Some other software you might want to try is MonitorOff and UltraMon. But having read about these, I'm pretty sure they will not let you have the primary monitor on and yet at the same time send the secondary monitor into standby. I think UltraMon can send your monitors into standby, but it can't do it individually. 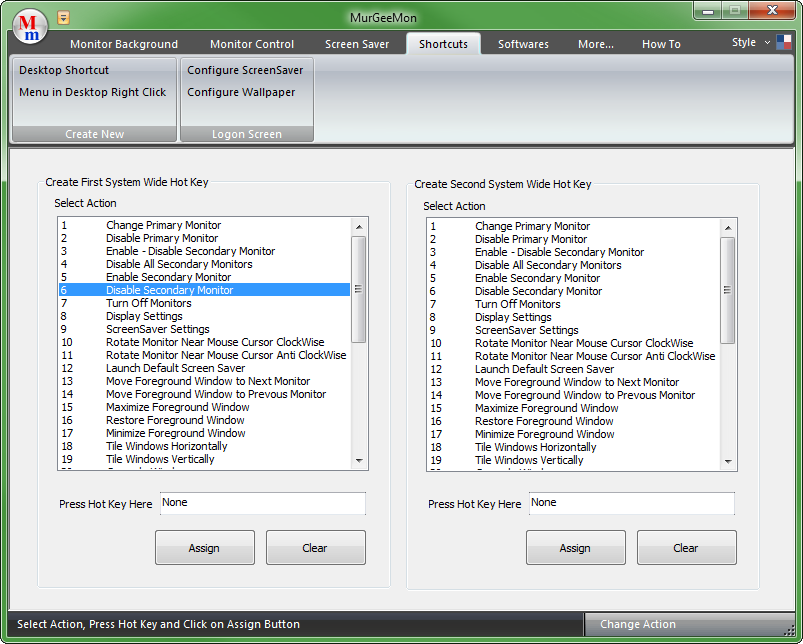 With MurGeeMon, you can create a hotkey to disable the secondary monitor (screenshot above). You can also create a shortcut on the desktop. But again, all this does is disable the monitor. It doesn't send that one single monitor into standby.

Yet for this purpose, you can use the convenient Win+P hotkey to get the same result. This hotkey is set by default in Windows 7 and 8. The "P" stands for projector. It was added to make switching between computer monitor and projector during presentations more easy. You get the options Computer only, Duplicate, Extend, Projector only.

But you obviously don't need to have a projector on the other end. The projector might as well be your secondary desktop monitor. So it's essentially switching between primary and secondary monitor, and the duplicate and extended mode.

Ideally, the best solution would be a setup where you can set your primary monitor to enter standby after x minutes, and the secondary monitor after y minutes. And only the active monitor, where you have your mouse cursor at stays active, and the second monitor enters standby mode. Unless you move your mouse cursor over, which would keep it wake, or awake it up if it has already entered standby.

This would be ideal, as I see it. And I think this is exactly the type of behavior you are after. Unfortunately there are no ready-made solutions like that. Not for Windows OS at least. Microsoft has yet to catch up on this idea and implement it in some distant, upcoming version of Windows. Either that, or some third-party developer will need to step forward and make this happen. As far as I can tell, that has not happened yet. And chances are that some third-party developers will make it happen before Microsoft does. Then Microsoft will come along and copycat that idea. That's usually how it has worked in the past, with features like rearranging program buttons on the task bar which was first introduced in Windows 7.

3
How to prevent second display from being blackened when I turn off the primary display in Windows 7
4
Windows 7 dual monitor: Don't move application windows when turning off second monitor
13
Is it possible to automatically put individual monitors to sleep when not in use?
0
Taskbar cut off when using VGA on second monitor