Does a portable USB monitor require a VGA Card?

For example this monitor:

If I buy a PC without any GPU capability (processor without integrated GPU + motherboard without D-Sub/DVI/HDMI ports and without any discrete graphics card at all), would the BIOS detect this kind of monitor at start?

"Does a USB Monitor require a VGA Card?"

"This 16-inch portable LED monitor is a must-have laptop accessory and receives both power and signal via a single USB cable for plug-and-play connection. Powered solely by USB, the monitor does not require a power cord or VGA cable." - From the First Link provided. 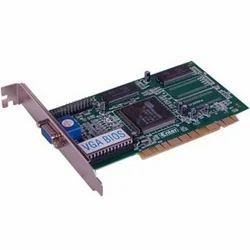 1 VGA is an abbreviation for "video graphics array", every modern graphics adaptor or card is capable of displaying the VGA mode.

"If I buy a PC without any VGA card, would the BIOS detect this kind of monitor at start?"

[First Part of Question 2]
In response to your second question, VGA is an abbreviation for "video graphics array", every modern graphics adaptor or card is capable of displaying the VGA mode. There are no VGA cards, there are graphics cards with VGA output connectors.[2]

The following graphic shows the different types of output connectors that can be found on a graphics card. 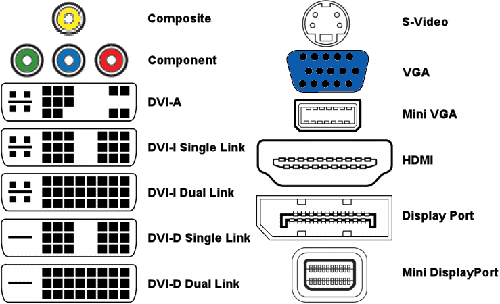 As you can see USB is not on the list of output connectors. Before portable USB monitors the only option was to buy a USB to HDMI/VGA/... adaptor. Using USB to output to a display device is relatively new and while Windows and Mac have drivers that support these USB monitors, Linux has not quite caught up yet.

[Second Part of Question 2]
On the first start the BIOS will probably not know what to do with the device. But that doesn't mean all is lost. This is a blog post by JoKi who bought the AOC E1649FWU (the monitor in your first link) and got it working with Ubuntu 13.04. But there are some posts in the comments section from people who followed JoKi's steps and couldn't get their portable USB monitor to work.

I wrongly used the term VGA card, what I meant was Graphics Processing Unit.

"What is the difference between the graphics processing unit (GPU) and a video card, video adapter, graphics-accelerator card, display adapter, or graphics card?" - All of us at one point or another

Much like the term CPU (Central Processing Unit), the term GPU is often times miss-used. A GPU can be found on a video card, while a video card cannot be found on a GPU. Many modern computers do not have video cards but instead have GPUs integrated directly onto the motherboard. This allows for a less expensive computer but also for a less powerful graphics system.[3]

"A graphics processing unit (GPU), also occasionally called visual processing unit (VPU), is a specialized electronic circuit designed to rapidly manipulate and alter memory to accelerate the creation of images in a frame buffer intended for output to a display." - Wikipedia GPU Entry

"[A video card] is an expansion card which generates a feed of output images to a display , such as a computer monitor." - Wikipedia Video Card Entry 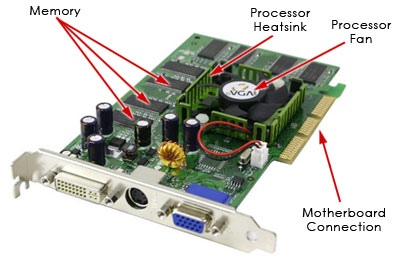 [Image of a video card with memory and GPU]

If I buy a PC without any GPU capability (Processor without integrated GPU + Motherboard without D-Sub/DVI/HDMI ports and without any discrete graphics card at all), would the BIOS detect this kind of monitor at start?

Buying a computer without any (as in zero) graphics capabilities and trying to output to a display device is impossible, unless your display device is a printer of some sort with a tangible medium. But for the questions sake, it all depends on the drivers installed on your system. Take for instance the output from syslogd on JoKi's Blog Post.

[FIX-1] by ChrisInEdmonton
Not true. It's perfectly possible to buy a PC without a graphics card, and I routinely do so. They aren't usable until you add a GPU, but you may well purchase a PC without, and bring over your GPU from your old computer.

[2] Difference Between VGA and Video Card/Graphics Card
[3] What is a video card?

Does a portable USB monitor require a VGA Card?

No. The USB monitor does not require any other video hardware resources. Some may take advantage of GPUs available, but they do not require them.

If I buy a PC without any GPU capability (processor without integrated GPU + motherboard without D-Sub/DVI/HDMI ports and without any discrete graphics card at all), would the BIOS detect this kind of monitor at start?

No. There are no BIOS versions that work with USB video adapters at this time, and it's unlikely that they will do this in the future.

You didn't ask specifically, but there's a third implied question you probably need answered as well:

Will the computer boot without a standard graphics card?

If your OS can operate in "headless" mode, then you shouldn't have any issues - eventually your USB video adapter will be loaded, and those programs that want a video resource will find it.

If your system doesn't support headless mode, you'll need to make sure the USB video adapter driver is loaded early enough in the boot process to avoid errors for unavailable video output.

As you are using linux, this shouldn't be too difficult, but you may want to review documentation for running your system in headless mode to find things which require a video device so you can delay their startup until after the video driver has been started.

Well, to provide an answer to the last question: No, the firmware will not work with USB video adapters. It most likely won’t even boot.

While there is a standard of sorts (DisplayLink), I’m not aware of any firmware with built-in support.

No, a USB Monitor does not require a VGA card.

I have several small intel x86 machines with no display adapter (VGA Card) of any kind. However, a large quanity of the ones I own come with an additional module in the BIOS firmware that will redirect the BIOS SETUP to the COM1/dev/ttyS0 serial port.

Even this is not required -- I have some jetway motherboards that have a 'headless' option that can be turned on in the BIOS. However, there is a catch 22 -- you must plug in a display adapter to configure the setting in the BIOS, then remove the display adapter again afterwards.

Many small form factor (Mini-ITX) motherboards will have similar options, they tend to be popular with home NAS builders for networked storage.

The BIOS will never see most USB Framebuffer devices as a viable display adapter (In many cases, the firmware ROM chip is not included with cheap USB framebuffer devices as a cost-saving measure, relying on a firmware to be sent over USB to the device's memory to start up) however, if you can get board to boot linux in some fashion, the USB monitor should light up once it's discovered, probed, and had firmware thrown at it from the drivers.

I have a ViewSpan UFX7000 based USB 3.0 adapter that I commonly use to plug a monitor into headless units. On modern Ubuntu 13.10 and 14.04, it's detected as a new display device as soon as I plug it in and the Login Greeter displays, and then I plug in a USB keyboard and mouse and they're correctly routed to that display, and I log in to the desktop environment.

I've also tested a couple DisplayLink based devices, they behave the same when displaying the Login Greeter but the older USB 2.0 displaylink devices that lacked full compression support are often too choppy to be usable. (DL-160 was choppy, DL-195 was okayish.)

However, the newer displaylink DL-3000 and DL-4000 series are not supported under linux when last I checked due to some kind of encryption, compression, or encoding process that was not understood by the public developers and unwilling to be released by the hardware manufacturer.

The SMSC ViewSpan UFX6000/7000 is partially supported under linux, however the company SMSC was purchased by Microchip sometime last year. They tried to release some updated drivers in February 2014, but someone botched the job and the updated framebuffer drivers are not available due to a File Not Found error. http://www.microchip.com/wwwproducts/Devices.aspx?product=UFX7000 http://www.microchip.com/SWLibraryWeb/product.aspx?product=SRC-UFXx000_FBLINUX

I sent a mail to webcorrections >AT< microchip.com asking for it to be updated back in march, but there's been no change as of May 2014.

Edit: It's August 2015, I checked back and the framebuffer driver package is downloadable now.

The xorg GUI drivers apparently have not been updated by the company since 2011. http://www.microchip.com/SWLibraryWeb/product.aspx?product=OBJ-UFXx000-XLINUX

But if you can get the framebuffer itself working, loading the fbcon module will work well enough to get a text login screen.

It's probably a good idea to have a display adapter on hand for debugging, but once you get it all set up, it should no longer be required and can be shelved or returned to it's source machine, if you borrowed it for a bit.

Your mileage may vary!

29
What exactly is VGA, and what is the difference between it and a video card?
1
How to boot computer without any video card