Set the primary maximum and minimum Y-values equal to the corresponding secondary Y-values on a graph in Excel?

Is there a way to set the scale on a chart so that the primary maximum and minimum Y-values equal the same values on the secondary Y axis as well?

Basically I have a number of different stocks I'm looking at (historical log values), which each has its own line graph of the prices, and then I added a secondary series that shows 3 horizontal lines - the average price, and one standard deviation above and below the average so I can see the usual price range the stock fluctuates in (this series I have as a Scatter graph). My problem is that Excel seems to be using a different auto-scale for each Y axis (I've tried including the same minimum and maximum values in my secondary series, but the scale is still different sometimes).

Ideally, since I'm looking at quite a few different stocks, I'd like to automate this by adding a few columns where I could just set the maximum and minimum Y-values to equal the maximum or minimum price of each stock (for both the primary and secondary axes). I tried looking at the following site to see if I could create a macro (http://peltiertech.com/Excel/Charts/AxisScaleLinkToSheet.html) but my macro-writing skills are pretty deficient and haven't had much luck.

I realize this request might only be possible through VBA though, so basically long story short, would anyone know how to set up a macro that will enable my selected chart to autosize using the parameters I give it? (Say column A shows the dates, B shows the prices, and a section to the right (say cells D1:F4) would specify the Min and Max values of X and Y, and maybe the Tick size that the macro could read from? (I know how to create a blank macro, and then jump into the macro itself, but that's where I start getting a bit lost as to where to actually paste the code).

This code snippet should provide you the basics for your request. In a module for your workbook, it should stand alone, or from here you can expand it to other worksheets or to modify any part of a chart. The first couple lines are for error trapping-in case you don't have a chart selected. Everything else formats. Just point the reference ranges to the cells you'd like to use for your scales.

You could make this automatic and independent of VBA by adding some data to the chart. 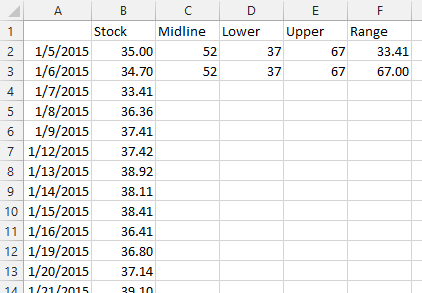 In the third chart I've added the min/max data from column F to the primary axis, and in the fourth to the secondary axis.

However the data changes, the min/max calculations in column F will update, and so will the chart. 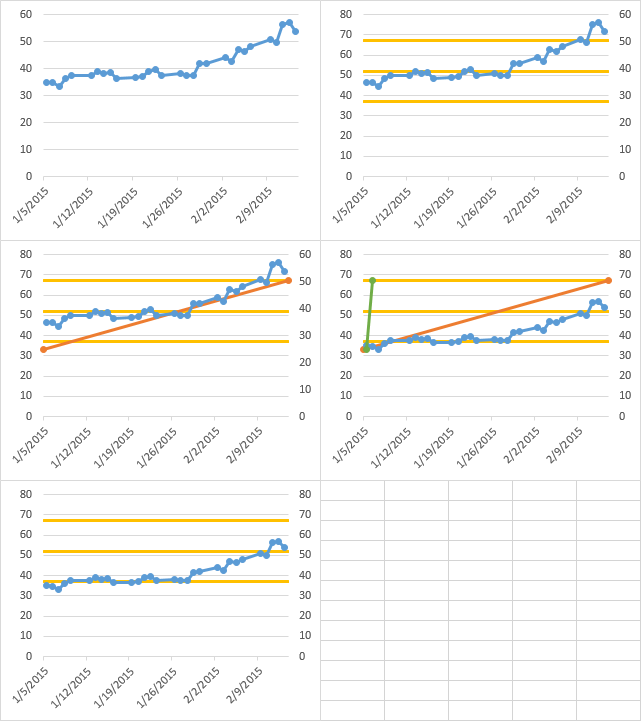 Not the answer you're looking for? Browse other questions tagged microsoft-excel macros charts or ask your own question.

6
How can I change the z-order of data series on the secondary y-axis relative to those on the primary y-axis in Excel 2003?
1
Plot disproportionate values in single graph with Excel
1
Excel chart axis does not depict the data correctly
1
Single data series with both primary and secondary axis (in two different units)?
0
How to create a bar chart, comparing values with one set on the secondary axis in Excel
1
Excel Chart - Automatically Adjust Scale of Secondary Axis
0
How to make a graph in excel with 2 side by side x axis and one y axis
0
How to create a scatter excel graph with y-axis above and above and below x-axis