I am running out of SATA power connector from my PS unit.

I want to know that how many max i can join them in series. Can i make 4 connectors out of one cable 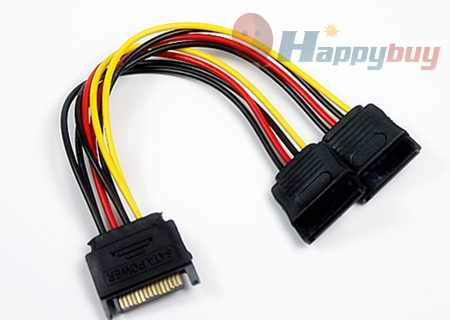 Power distribution in any situation is like a length of chain or team sport. It is only as strong as its weakest component. For most power systems, there are 2 main elements: connectors and cable.

Each element has certain voltage and current ratings. These ratings are usually dependent on temperature. They also only apply to the brand of components you have.

So for this example, we'll use a Molex brand Molex to Sata cable. Why? Because Molex acutally bother to take the time to specify the parts that make up their assemblies. The spec for this cable is available here. We're only interested in the cable and the sata connector though.

If you look at that spec, you notice that the connector is rated to 1.5 A DC and the wire they use is 18 AWG (I'm a mm² man myself but let's roll with it). If you look up recommended wire gauge to current rating (such as here) you'll note that 18 AWG is rated to 16 A for short runs. So our connector is the weak point, more specifically the point were two connectors meet.

Now let's look at HDDs (as per your comment). Say you have a Seagate Barracuda 1 TB, when you look at its specs, it draws about 6 W under operating conditions. We'll say this is 0.5 A @ 12 V (though it is probably a combination of the rails) to simplify. This isn't the worst case though, this drive draws 2 A on start up but the connectors can handle it for a short time.

So you have 3 of these drives and you want to split them off the same SATA power point. The current will be additive so the current draw when operating will be...

However, this is when all drives are reading and writing which is unusual unless you have a RAID-1 type setup on all 3 drives.

So theoretically, yes, you could connect 3 hard drive off a single power point. More would exceed the designed limits of the connector that would connect to the PSU.

On a side note, while the start up current should be considered as a part of design (up to 6 A in this example with all 3 drives), it should also be noted that the Molex connectors have tested at higher current (7 A, see this connector spec). But if you exceed the design max and melt something, then that will be your problem and yours alone.

As it was mentioned already, the wire itself (18 awg) has a current limit of MUCH more than the connector (~16A vs 1.5A).

FYI, Current refers to Amperage NOT Voltage. Every PSU (and extension) I have ever worked with uses UL1007/3057 Series "hookup" wire which is a stranded, tinned-copper wire rated at 300V... WELL above the 3.3, 5, or 12V supplied by a Computer PSU!

So, in your case if you have one "cable" or set of wires with 3 SATA Connectors already. You could easily use (3x) 3-way Y-Adapters for a total of 9 drives using the example above of 0.5A/drive!

Another option (and the better alternative IMO) would be to add a punch down style connector in-line with your existing cable! I make custom sleeved extensions and modded PC's for a living and this is, by far, the better option for most people (unless you feel comfortable soldering and understand the way a PSU and electronics work)!

(dead link) It is a connector like this one: http://www.candccentral.co.uk/images/D/8700_0.jpg

On some of our higher-end builds / mods we have connected as many as 15 drives on a single cable using similar connector types...

Please keep in mind however that we ALWAYS use at least 16 AWG Wire capable of higher current, no matter which PSU we are modding. We also use solder type connectors rather than the punch down style which has less resistance (and thus, less heat and better power transfer).

Each of our mods are custom tailored to the PSU being used, the HDD/SSD/ODD being used, and the system itself.

Either way though, you should have plenty of "overhead" using these type of connectors to use 5-10 drives on one 18 AWG cable, possibly more but I'd need more specifics to say for sure.

Just make sure your PSU has either a Single 12V Rail, or that your 12V Load is evenly distributed over a Multi-Rail Design.

Hope this helps and good luck to you or anyone else attempting a PSU Mod!

0
How many SATA Drives can be safely connected to SATA power connector?

5
Is there any limit on number of devices i can use with power supply
3
How much can you add Y splitteres to molex connectors?
4
How can I get or make a USB to SATA-power cable?
1
Where do SATA drives get their power when using a PCI SATA controller on oler PCs?
3
Motherboard HDDPWR1 connector
2
How to Add Additional SATA Power Connectors?
0
Can I add peripheral power connectors to server?
0
How can I power a GTX 650?