Edit 3: I've finally found something about backlit keyboard power consumptions: http://www.ctielectronics.com/pdf/811675-Industrial-Keyboard-Backlight-Instensity-Adjustment.pdf "Power requirements for the backlit keyboard are less than 100mA @ 5VDC (typical), and all power required for backlighting is taken from the keyboard port of the Host PC": even if the one referred by the link is smaller than the one(so less LEDs) I specified I think that I should be able to feed keyboard and mouse with less than 500mA

Edit 4: I have received the objects, plugged them to the hub and they work correctly.

The operative word here is negotiate. The host is fully within its rights to refuse a USB device switching to high power mode if such amounts of power are not available for any reason, and the device must deal gracefully with failure to switch to high power mode. Likely, it will appear as though it is shut down if the negotiation to high power fails, or in the case of a backlit keyboard the keyboard might work but the backlight might remain turned off if sufficient power for that feature is not available.

As has been pointed out by arch-abit, the power consumption of the keyboard (or even the keyboard and mouse combined) is likely to be significantly lower than the 2.5 W allowed for by USB. Based on Journeyman Geek's back-of-the-envelope calculations in another answer to this question, depending on the specific LEDs used and their light output, it might quite possibly fit well inside the 0.5 W (100 mA) allowed for by the initial low power mode. LEDs are very power-efficient; a few watts into a LED lightbulb is enough to provide general lighting for a small room, so a keyboard certainly shouldn't need more than a few hundred milliwatts (a few tenths of a watt) for its background illumination, and quite possibly significantly less than that. After all, we are talking about background illumination to help you see the letters printed on the keys in otherwise dark conditions, not general illumination.

If all devices involved are USB 2.0 certified and can be used without weird constructs like USB Y cables for power, you likely don't need to worry at all. If the switch has an external power supply (functions as a powered USB hub) then you almost certainly don't need to worry. The worst that is likely to happen is that something won't function, or will function only erratically (depending on the instantaneous power-up ordering, for example).

Why not check yourself? Many computer motherboards are able to tell you the power consumption of a usb port via the control panel.

Go into the control panel, system > device manager and find the USB port or hub in question in the list. You'll then see power consumption figures like this: 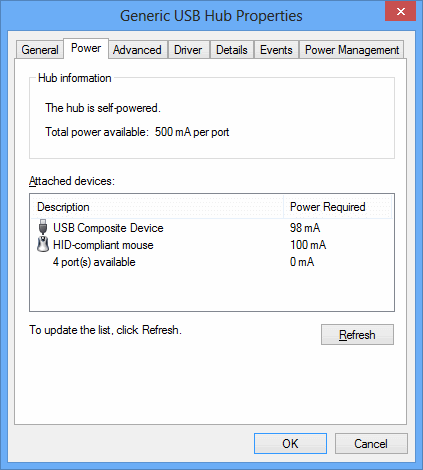 Measure it yourself! USB ammeters are useful little tools.

"Charger Doctor" is one brand of USB ammeter, targeted at seeing how much power a USB charger is actually supplying, but it works on any USB device. However, be aware that it's not the most precise ammeter, it will read zero for very low power devices, such as keyboards. (With my plain keyboard, it reads zero, even when actively typing.) 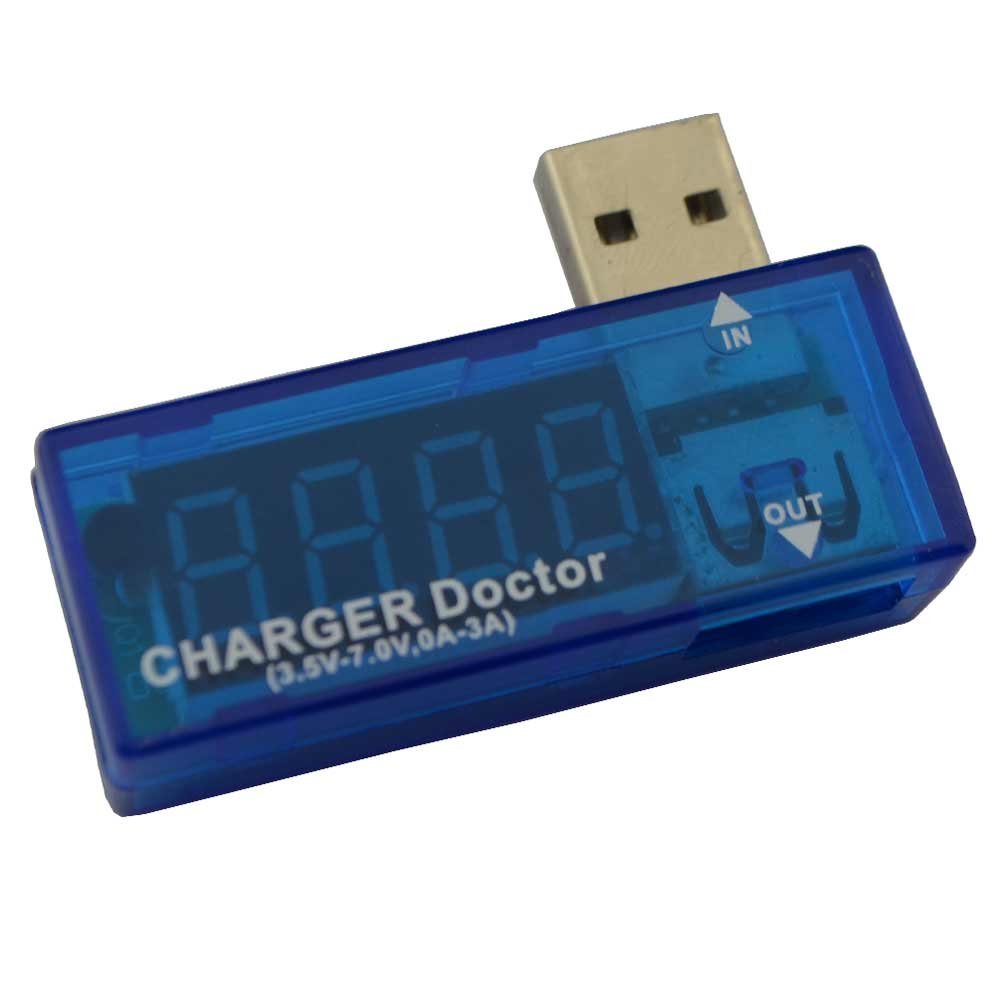 The power consumption is negligible, less than the 500 mA which is where USB 2 is rated. As a comparison, your keyboard probably uses some blue LEDs, they are not going to draw more than 80 mA each, and more likely to draw somewhere between 20 and 40.

If your USB hub is powered, then the keyboard is not going to draw any power from your PC. USB keyboards and mice are made for USB, and they do not usually break anything.

I don't have the power consumption figures, but the keyboard is USB certified which means it will only draw what its allowed to draw. So there is no risk of 'breaking' the port.

You 'could' run into issues with portable/travel switches that don't have external power, but not you wont damage things.

A bit of back of the envelope calculations, and common sense might help here.

From a little research the LEDs on a keyboard are similar to these flangeless 3mm leds. Based off the specifications there - it would be 3.5V at 20ma, o7 or ~7mW per key. Assuming a 101 key keyboard its 700mW for the leds alone. Considering USB 2.0 does up to 2.5 amps, You should have quite a bit of headroom

I am going to go by memory over here.

From what I can remember, the average USB keyboard should require approximately 120 ma to about 140 ma. This is with the standard 3 LED's (Cap Lock, Scroll Lock, and Num Lock) lit up. These LEDs require very little power since they are only simple indicators.

The lit keyboards have various designs depending on the manufacture for the lighting technique. They use a number of LEDs placed around under the transparent keys. The LED light is spread by using various optical design technics. The total power consumption in these types of keyboards can approach 160 ma to 200 ma depending on the design.

The cordless mouse and keyboard adapter that works on the USB port can require about 30 ma to maybe 50 ma.

Do I risk to "break" the USB port? I tried googling, but I haven't found any power consumption specification.

(As usual, the problem with the answers here is that they provide silly textbook answers while ignoring hard realities...)

If you always believe what you read, then the USB spec says you're fine and that no device will ever exceed or 'overload' the board, however, reality...

However, there are a few problems with this.

I looked a bit into the spec and market reality a mess. 100mA is supposed to be always required initially (which might explain a lot of '100mA' on device managers) but then after that initial negation a device is free to ask up to 500mA. Now whether that is truly what is drawn or if the OS accurately reports that or waits for the device for confirmation of a new current I do not know.

What is certain is that there's tons of dodgy implementation in the market; devices drawing tons of power above that specified and the icing: "Devices" that aren't even negotiating anything electronically; just drawing current, like lamps and fans and vacuum cleaners (yes).

What's interesting is that it appears there's is little control - at least proactively - by the host bus: Devices can usually pump whatever they want without negotiating it.

It appears what made it worse was the requirement of the bus to act as a charger supply so lots of devices (manufacturers) would whine that there's too much work needed before they are able to pump the juice. So there appears to be little future for restricting it, more likely is the opposite, to give even more freedom to chargers.

tl;dr: have a powered hub ready if you suspect power issues, USB spec itself won't easily protect you.

(source: https://geekhack.org/index.php?topic=44092.0 ...only because it says it better and more succintly than I could myself)

So, here is my advice, if you have an older computer, one built with cheaper components (or a cheaper off brand keyboard) and there is any question in your mind that your computer "may not be able to handle it" then you should look into buying a separate usb hub which is externally and separately powered. (not a y connector)

Even if, the usb is correctly implemented and there is no danger from overload, if you know that you like to have many usb devices plugged in at once, it is a good idea to buy a powered usb hub since Without the external power source, you might get a "USB Power limit exceeded" warning on your computer. (again, I'm not going to argue maths, because it won't help you, how often have I made the mistake of trusting what I read, only to find this or that exception the rule, too many.)

(sadly, there are risks with this solution because of some lazy motherboard manufacturers, you may or may not have issues recognizing the hub at startup)

Not the answer you're looking for? Browse other questions tagged usb keyboard power power-consumption or ask your own question.