I have data with 60+ variables and I would like to group the variables into different collapsible fields in a pivot table, similar to having different tables in the pivot field list - ie, instead of having all 60 variables in the same long list. A bit like creating sets, but allowing the set members to still be chosen individually.

I have tried splitting the variables into different pivot tables, but it's a tedious process to do manually and hard if not impossible to do automatically using PowerPivot. I have also tried to split them with perspectives, but that is a bit difficult to maintain, because the variables change over time and I would like to make it as easy to use as possible (the end user wouldn't have to touch anything but the charts or maybe some macro button). Is there a simpler way of doing this?

I'm happy with either PowerPivot or a normal pivot table based solution. Using VBA isn't a problem either.

Edit: Here is a picture that hopefully demonstrates what I am trying to achieve, grouping without splitting data into multiple tables:

There is a way you can do this. For each "folder" you'll need to create a dummy PowerPivot table to hold the calculated measures.

The simplest way to do this is to create some linked tables. For example, let's say you want "folders" to hold your Errors and Goals measures. Create these tables on your worksheet and for each click the Create Linked Table button on the ribbon.

In the PowerPivot window make sure these new tables are named as you desire - these will be your "folder" names: I've used VarErrors and VarGoals. Don't try and link them to any other table - allow them to be independent.

Now you can start allocating measures to folders. For each existing measure, edit it (go into Measure Settings and set the Table name to be the variable "folder" that you want. 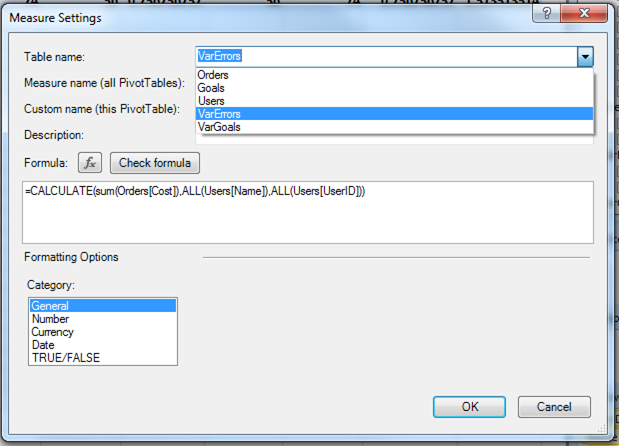 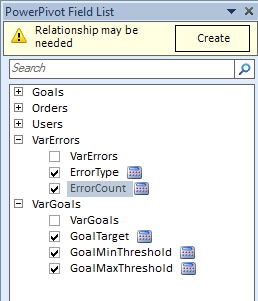 Not the answer you're looking for? Browse other questions tagged microsoft-excel microsoft-excel-2010 pivot-table powerpivot or ask your own question.