According to the answer on another post, we should not have been receiving any more updates for Windows XP.

But I am receiving updates: 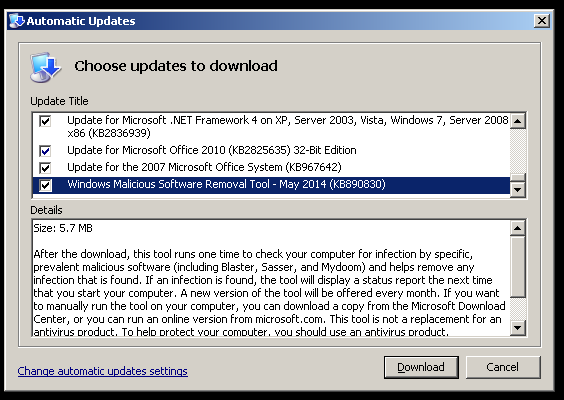 Is this indicative that my system is bugged or compromised (some malicious program trying to trick me into clicking "Download" which downloads their software)?

Both answers given say it, but I don't consider them clear enough. This lead me to add an answer of my own, just to clarify things.

The Windows Update functionality won't stop, but no updates that fix security leaks in Windows XP will be patched, meaning that the longer you use Windows XP the bigger the chances are that your pc becomes infected with spyware and a hacker can take over your pc installing randsomware and other crap.

Especially old pc's had a problem because updating to a newer OS meant that it just would not be possible due to the performance. Luckily, since the recent Windows 8.1 update, if you install Windows 8.1 32 bit (given that you have less than 4 GB of ram) it will actually perform better than Windows XP will. I experienced this first hand myself when I was forced to update my old pc. Not to mention that a full install of Windows 8.1 requires less free diskspace than Windows XP does.

The updates shown on your screenshot are not Windows XP updates. They are related to .NET Framework, Office 2007, Office 2010 and the Malicious Software Removing tool that's why you're receiving it.

I don't think your system is compromised (at the moment) but I strongly advise you to upgrade it to at least Windows 7 because Windows XP is no longer supported.

The key thing to understand is that no NEW updates will be released for Windows XP after the EOS date. All previous updates will still be made available, so check the release date of the updates you're seeing. They should all be prior to the EOS date with the exception of the update for IE related to CVE-2014-1776. I'm not sure if the Windows Malicious Software Removal Tool qualifies as an update but what you're seeing is legitimate, as shown here in the Applies to section:

Additionally, I would find it very hard to believe that malware could inject itself into the Automatic Updates engine and masquerade as an update advertised alongside legitimate updates.

Not the answer you're looking for? Browse other questions tagged windows-xp windows-update malware or ask your own question.

4
Vista (Business) won't download Windows updates
11
Why does Windows/Microsoft Updates always take a long time to detect available updates?
4
How to stop Windows from switching back to "install updates automatically"?
0
Windows Updates Install Over and Over
3
"Failed to Configure" restart loop with Windows 7 Updates
104
What are all the Windows 7/8/8.1 updates (KBs) I must skip to avoid Windows 10 upgrading -and nags-?