Does the HDMI port on a video card support audio?

When purchasing a video card based on nVidia or AMD, does the HDMI port support audio as well as video?

Here's an example of a video card with built-in HDMI:

Please note, that is just an example, please do not flag this as a shopping question!

The HDMI standard itself does support audio. However, whether it works for you depends on the specific card, though all the recent cards I know of from AMD or nVidia do support audio via HDMI.

Some older cards only have partial support, and require a S/PDIF connection to a header on the motherboard/sound card. I had a MSI nVidia 9500 GT that did this. Example 1. Example 2.

Unfortunately, graphics card manufacturers don't seem to put the HDMI audio details into their spec sheets (at least MSI doesn't). Therefore, it's difficult to be certain. You may have some luck contacting the manufacturer, asking the retailer or searching for other users of the card model. Failing that, you can make some assumptions - a brand new card now probably supports it.

Then there's software support. I'm not certain what the situation with Linux is, but audio out via HDMI does come up as a separate sound device on Windows when you have a discrete video card. This may require special drivers, and you might have to change your default output device.

This screenshot is from windows, but we're talking about the hardware capabilities

I do believe there's a similar setup with intel onboard video - on my laptop, its called 'Intel(R) display audio', and I suspect it uses the default driver on my desktop. I had someone check up an AMD system, and he runs linux - and he reports it turns up under lshw as something like 02:00.1 Audio device: Advanced Micro Devices [AMD] nee ATI Turks HDMI Audio [Radeon HD 6000 Series]

There's no reason an AMD card shouldn't but yes, with the appropriate settings and drivers, this certainly is possible - just ensure these audio devices are available, and set as the system default or the output for that application.

Even if the device exists, there do seem to be some possible software issues under linux but the hardware certainly supports it

For digital audio, if an HDMI device supports audio, it is required to support the baseline format: stereo (uncompressed) PCM. Other formats are optional, with HDMI allowing up to 8 channels of uncompressed audio at sample sizes of 16-bit, 20-bit and 24-bit, with sample rates of 32 kHz, 44.1 kHz, 48 kHz, 88.2 kHz, 96 kHz, 176.4 kHz and 192 kHz.[20][55] HDMI also supports any IEC 61937-compliant compressed audio stream, such as Dolby Digital and DTS, and up to 8 channels of one-bit DSD audio (used on Super Audio CDs) at rates up to four times that of Super Audio CD.[55] With version 1.3, HDMI supports lossless compressed audio streams Dolby TrueHD and DTS-HD Master Audio.[55] As with the YCbCr video, device support for audio is optional. Audio Return Channel (ARC) is a feature introduced in the HDMI 1.4 standard.[56] "Return" refers to the case where the audio comes from the TV and can be sent "upstream" to the AV receiver using the HDMI cable connected to the AV receiver.[56] An example given on the HDMI website is that a TV that directly receives a terrestrial/satellite broadcast, or has a video source built in, sends the audio "upstream" to the AV receiver.[56]

Ubuntu has decent support for HDMI audio. In my personal experience with Mint, I had to play with the settings to get it to work properly.

The example card linked to apparently does support audio. If you believe the comments anyway; I searched them and at least one person said the audio is great.

for NVidia cards if you enter the NVidia control panel (on windows it's Control Panel> Appearance and personalization>NVidia control Panel. under ''display'' there is a setting, ''set up digital audio'' its that simple. 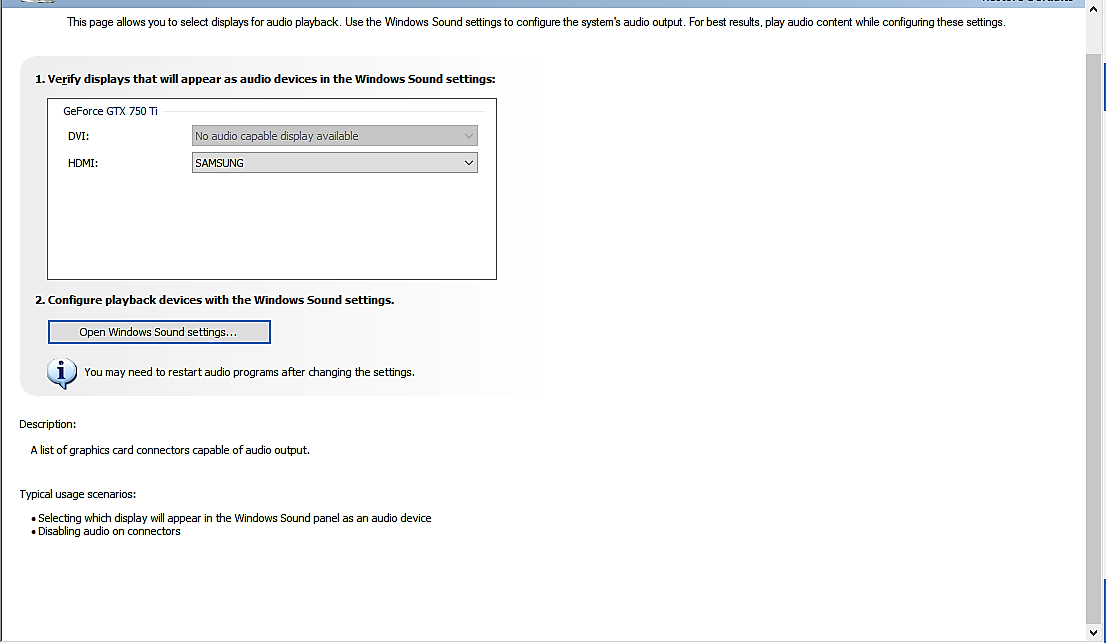 Many of the VisionTek Video Cards use audio over hdmi. VisionTek's newer Radeon R9 series even support the latest audio formats such as Dolby TruHD and DTS-HD Master that are found on Blu-ray disks.

Not the answer you're looking for? Browse other questions tagged audio graphics-card hdmi or ask your own question.

0
HDMI video card on older PC, how to tell if audio supported?
1
connected laptop with TV- sound from tv not working

1
Video Card needs additional mounting support
1
Cannot hear audio when connecting HP 8740w to Sony Bravia K46S4100 via displayport
7
When buying a video card, what specs should I compare/which are most important?
1
Does my graphics card have to be compatible with the motherboard chipset?
3
Do USB3 to HDMI adapters have their own graphics card?