I am using a Korean software (with a partial English interface) in a Korean Version of Windows XP SP 3
However, in parts of the software, even when I change the interface to Korean, Korean letters show up as random characters, as shown here:

This software is a video conferencing software and has a chat feature as well. When I type into the chat box, i can see the Korean letters appear properly at my side, but when I press Enter and send the message, it changes into random characters as shown above in the chat box.

What could be the issue here? Could it be a missing font in my computer? Since this is a Korean Windows installation I was hoping everything would work properly by default. What can be done here?

I asked some other people who are using this software, and they think that the problem is at my end, and playing around with the Regional and Language Settings might solve the problem. Also, they suggested I install all the language packs related to Korean display. But it looks like all the language packs have been installed, and my location is set to Korea in Regional and Language Settings in Control Panel, and I still have this problem.

Also, I have had similar problems with displaying Korean on an English Windows XP computer. This answer suggested some solutions, but I still do not quite understand exactly what I have to do (at that time I had not fixed the problem, as I later on changed the computer). If I follow that answer, what fonts exactly do I need to install?

To do this, search for and open intl.cpl to launch the "Region" control panel options dialog.

Select the Administrative tab, and in the lower section "Language for non-Unicode programs", set it to Korean (Korea). 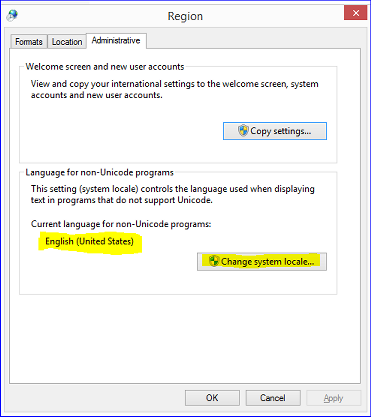 I had a similar issue and the answer there should be applicable to this question.

Not the answer you're looking for? Browse other questions tagged windows-xp fonts unicode fontconfig korean or ask your own question.

2
Why does a Win32 application show Korean Characters correctly on one Windows 10 computer but not another with the same version and language packs?
1
Displaying Korean characters properly on a computer with English Windows XP

10
Hotkey to switch between Hangul and Latin input input modes with Windows 7 Korean IME?
10
Permanent fix for unicode characters not displaying correctly (as boxes)
2
Why only some unicode characters are visible on Firefox?
3
Adding Microsoft console (CMD) font in registry does not work with Eastern Asian language for non-unicode programs
1
Displaying Korean characters properly on a computer with English Windows XP
2
Is there such a thing as 'Korean Microsoft Windows 10' or is it just regular Windows preconfigured to Korean language, fonts etc?
1
Stop Word 2007 from automatically converting sequence of English letters to Korean
2
Why does a Win32 application show Korean Characters correctly on one Windows 10 computer but not another with the same version and language packs?