Why are special characters such as "carriage return" represented as "^M"?

Why is ^M used to represent a carriage return in VIM and other contexts?

My guess is that M is the 13th letter of the Latin alphabet and a carriage return is \x0D or decimal 13. Is this the reason? Is this representation documented anywhere?

I notice that Tab is represented by ^I, which is the ninth letter of the Latin alphabet. Conversely, Tab is \x09 or decimal 9, which supports my theory stated above. However, where might this be documented as fact?

I believe that what OP was actually asking about is called Caret Notation.

Regarding vim and other text editors: You'll typically only see ^M if you open a Windows-formatted (CRLF) text file in an editor that expects Linux line endings (LF). The 0x0A is rendered as a line break, the 0x0D right before it gets printed as ^M. Most of the time, editor default settings include 'automatically recognize line endings'.

That is exactly the reason.

ASCII defines characters 0-31 as non-printing control codes. Here's an extract from the ascii(7) manual page from a random Linux system (man ascii), up to and including CR (13):

Conventionally these characters are generated with Control and the letter relating to the character required. Teletypes and early terminal keyboards had 'BELL' written above the G key for this reason.

Here is the best shot I can find of an ASR33 keyboard. As you can see the control character names are printed in small letters on the corresponding alpha keys. 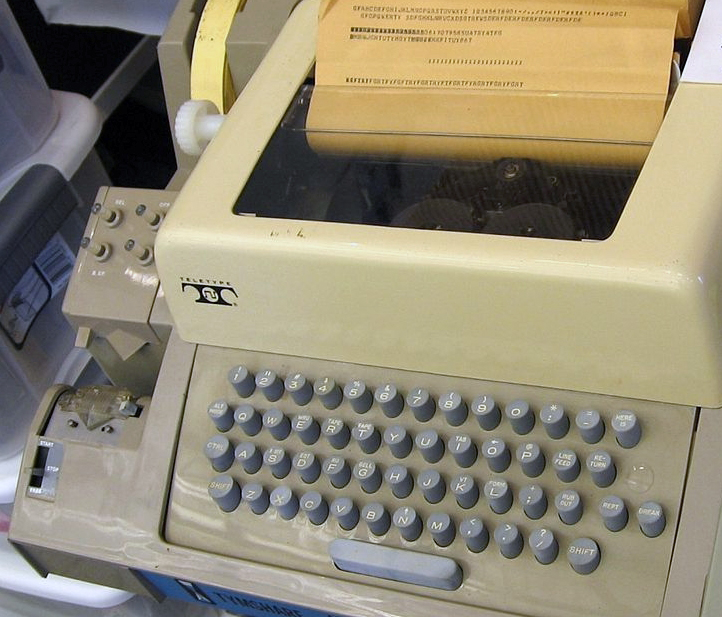 The M key does not have a notation on it because there is a dedicated "RETURN" key, so CTRL-M is redundant.

The caret (^) is just shorthand for writing hold the Control key - CTRL down.

In the good old days you could type these codes (see above) in directly, Ctrl key + G (^G) would make the terminal go "ding"

The need for some visual manner of displaying what are by definition non-printable characters.

So, someone in the early 1970s (or maybe earlier) (I remember seeing it on CP/M, and someone else has already mentioned TOPS) decided that "caret plus letter" would be the symbol for the 26 unprintable ASCII control characters with values 1 thru 26. Value 0 is/was printed as ^@, and value 127 as ^?.

Where is it documented, well this page lists every control character, with how to enter/represent it with the control key(though the first one, ascii character 0, has no control key representation), and it has nothing for character 127. And it provides sources at the bottom

One might wonder, given that there are 33 control characters (ASCII characters 0-31 so 32 charactres, + character 127. so, =33 characters) How they would be all represented as there are only 26 letters in the alphabet. Well, it uses Ctrl-A for Ascii character 1, Ctrl-Z for ascii character 26, and there once it reaches Ctrl-Z, it uses [ \ ] ^ _

It lists Ctrl-Z as SUB, though in DOS and the cmd prompt it's EOF, and as a techie user you use it when doing copy con a.a where a.a is your file. You enter the text and terminate it with Ctrl-Z which funnily enough doesn't enter an EOF marker. But does tell CMD that's the end of the file so CMD writes it.

but it's a broken link, but available on archive.org it's in the form of JPGs

You can see all of the non pritable ASCII characters Control mapping in this table.

Not the answer you're looking for? Browse other questions tagged terminal encoding special-characters or ask your own question.

4
why the enter command output is M in CentOS 7.x
1
Why does CTL-3/CTL-# equal CTL-[? (and others) in the case of ASCII control characters