How to record both input and output audio simultaneously?

I followed the section for PulseAudio in this tutorial. This almost works the way I want it to, but not perfectly because I can only record either outbound audio, or inbound audio, but not both simultaneously. 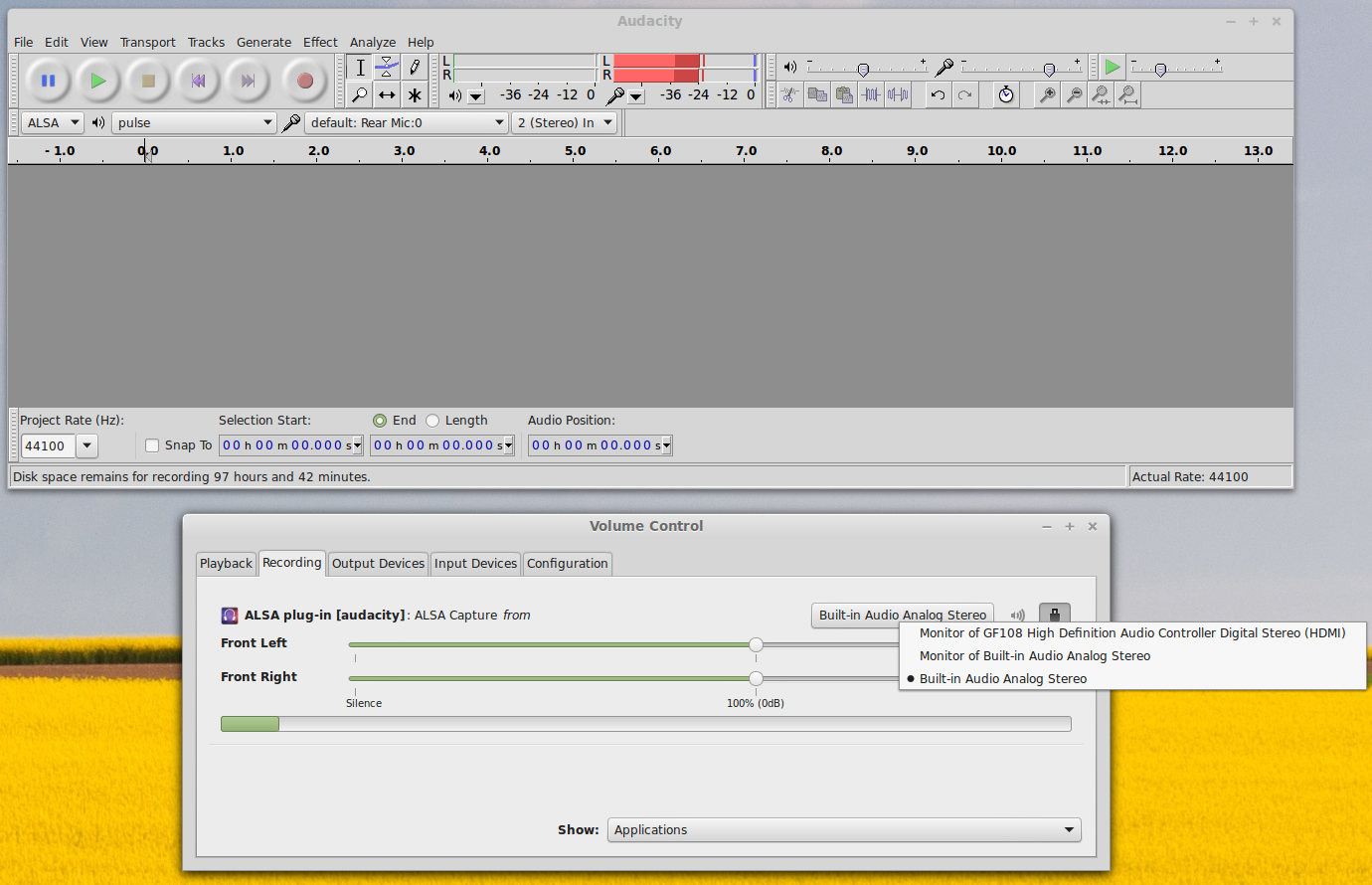 In the PulseAudio Volume Control, there are 3 options available (see screenshot). They are:

The closest I have come to achieving my goal is to manually toggle the "ALSA Capture from" option between option 2 and option 3 during a conversation. But this is tedious and does not allow interruptions in the conversation to be recorded.

The idea is to mix the source stream from your microphone to the speakers. With a correct set for volume and reciprocal position of microphone and speakers you should be able to avoid the Larson effect. :-)

and after change the recording device (Alsa capture from) from the built-in to the monitor one.
[You find in Volume control->Recording->Alsa plug in / Alsa capture from].

There's a short video for Ubuntu system on youtube

module-loopback
allows one to route audio from a source directly back to a sink.

By creating a virtual sound card and looping back both the real sound card's input and output into it, it's possible to record both, without hearing yourself speak.

The following is adapted from this solution to a more complex problem.

First create a sink to be used as a virtual sound card, and add two loopbacks into it, which will be used to route the real sound card's input and output.

Finally, navigate pavucontrol's "Input Devices" tab and set the monitor of the virtual sound card as the fallback device (by clicking the button with a check mark in a green circle to the right of "Monitor of Virtual-Sound-Card").

If you're using the ALSA plug-in, as depicted in the OP's screenshot, set "ALSA Capture from" to "Monitor of Virtual-Sound-Card" in the "Recording" tab.

After trying all the hacks and tools (Audacity, audio recorder etc ). Finally found this Open Broadcaster Software (OBS), which is super easy and just does the job.

In Settings → Audio, I was able to select:

For Source, I selected Screen Capture (XSHM) to capture the entire desktop or can keep it blank as well.

Not the answer you're looking for? Browse other questions tagged audio linux-mint recording audacity or ask your own question.

2
How to record desktop phone audio
5
Quiet Sound while recording using the “Stereo Mix” option on Windows XP
1
Output Audio via HDMI and Analog Out Simultaneously
7
Free solution to create a virtual sound device in Windows? (Skype speakers both virtual and real)
2
How to record audio from only a specific program on linux?
3
FFMPEG: commandline options to recording audio from mic and speakers
0
PC How to record phone call - other side speech is NOT recorded?