I have multiple connections opened, most of the are by avp: 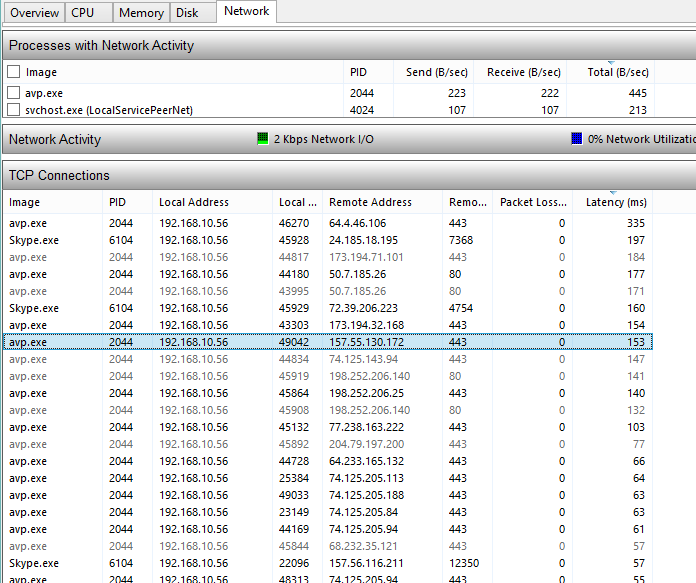 avp.exe is possibly either Kaspersky antivirus or a trojan that has infected your PC. There's no need for a genuine antivirus program to make connections to so many different external IP-addresses. Alternatively it may be part of a peer-to-peer program you have installed that is overloading your system.

Kaspersky avp.exe does intercept web-page connections to check for viral payloads, so the avp.exe lines may just be a misreporting (arguably) of connections made by chrome. In which case the real problem may lie elsewhere.

If you have Kaspersky installed, I'd try uninstalling Kaspersky and installing either the latest version or a competitor, perhaps just Microsoft Security Essentials, at least until the problem is resolved.

If you think it is a trojan, follow the guidance in How can I remove malicious spyware, malware, adware, viruses, trojans or rootkits from my PC?

There have been problems reported with Chrome that have similar symptoms

You can visit chrome://net-internals/#sockets and try flushing connections. Then retry accessing Twitter.

It might be bug https://code.google.com/p/chromium/issues/detail?id=162627 if twitter feed embeds enough <video> or <audio> elements. If this is the cause, the only real fix is to use another browser.

How many Chrome 'tab's do you have open at once (to the same server)? If it's many, try closing some of them, then refreshing the tab in question.

I had about 6 tabs to the same open at once and was getting the same error. After finding this post https://stackoverflow.com/questions/23679968/chrome-hangs-after-certain-amount-of-data-transfered-waiting-for-available-soc, I tried closing some of my tabs - it fixed my problem, and I could reload the tab that was reporting 'Waiting for available socket' (and I no longer got that message in the status bar, and images that weren't loading started loading).

How to fix error, “waiting for available sockets” in Google Chrome

Waiting for available sockets error on chrome basically happens due to overload images and data saved on chrome.Cookies and images saved on chrome once gets in huge it creates this error.Solution for http://www.fixotip.com/how-to-fix-error-waiting-for-available-sockets-in-google-chrome/ is very easy just open previous this url and follow the steps.

Whenever we do open any site it saves some cookies and images as temporary on browser.For the time being it reaches into overload and creates available socket error.and it will show in the bottom left corner of the screen.

Not the answer you're looking for? Browse other questions tagged networking google-chrome kaspersky or ask your own question.

464
How can I remove malicious spyware, malware, adware, viruses, trojans or rootkits from my PC?

9
Does Mac OS X throttle the RATE of socket creation?
2
chrome is slow in windows7 64bit (anything need 500ms "waiting")
1
Strange behaviour of Google Chrome when started for non-default profile
0
google chrome security certificate not valid
0
Waiting for extension User-Agent Switcher for Chrome
4
Unexpected "waiting for localhost"?
2
How to see all the TCP connections opened by Google Chrome browser on Mac?