I have the following configuration with Exchange Server 2010:

When users connect to the Exchange Server (using local LAN) though Outlook 2010, this warning is shown (in italian): 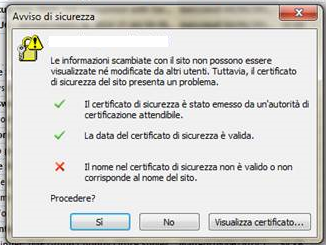 Translation: it says that the certificate is issued by an authorized provider (VeriSign in this case), the date is valid BUT there's a name mismatch (the name written on the certificate doesn't correspond to the server's name).

If I press the "Show certificate" button (the last one in the picture above), the certificate associated with IIS is shown: how can it be possible? I mean, it should only be used when connecting through Webmail.

Is there a way to avoid using an SSL certificate in local LAN but only for webmail?

This warning didn't show with Exchange 2003: we are using the same certificates.

Your certificate is for webmail.example.org. If you're connecting to your Exchange server via server.domain, then the name will not match the common name in the certificate, thus the error.

You either need a certificate that includes both names or you always have to use the external name (even when on the LAN).

To make sure your clients use the external connector for your Exchange services, here are a few commands that may help:

Recently I renewed my exchange server ssl from ssl2buy. I heard interesting news from there that CA/Browser from announced new guide that no CA can issue ssl certificates for hostname (NetBIOS names) and .local domain names later Oct 2014. All currently issued ssl for .local names support should expire before Oct 2015. Also Microsoft will add this change in next update.

I checked with Digicert, GeoTrust and Comodo. All said same. So I changed my server configuration and removed .local instances. If I don't change this now, have to do next year, but change is for sure.

More interesting is my previous exchange ssl from digicert was for $250+ and this new comodo exchange ssl is just for $45. Both works good and I don't see any issue.

You can try it there https://www.ssl2buy.com/comodo-multi-domain-ssl.php

Not the answer you're looking for? Browse other questions tagged microsoft-outlook ssl certificate exchange-2010 security-warning or ask your own question.

0
How to Disable or Bypass Outlook Certificate Warning
1
“The Server method 'SetObject' Failed” on Exchange Server 2010
3
Security Warning: The Server you are connected to is using a security certificate that cannot be verified. The Target principal name is incorrect
3
How can I disable security alerts for self-signed certificates in Outlook 2010?
0
Same certificate for encryption for different To:-addresses
0
Outlook 2010 send address not defaulting selected inbox