I use an app which monitors my RAM and displays it in the menu bar, and after copying several large files onto my mac from an external drive (totaling almost 5 GB), I only have anywhere from 250 mb to 400 mb of available RAM (the number fluctuates), usually this number is at least 3.5 GB. When I open the app, it tells me that most of the RAM (5.66 GB) is allocated to the file cache. 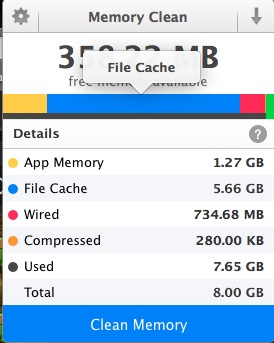 Is there any way I can get my RAM back without having to restart my computer? I would prefer if this could be done using an applescript file so I can easily run it in the future if I need to, but it's not necessary.

This is normal and doesn't represent a problem. People tend to think of RAM as being either occupied or free, but that isn't actually the case. A file cache is a perfect example of this.

When you copied that data from the external drive, it had to read the contents into RAM first so it could then write it to the other drive. Copying 5 gigs of data into RAM is a computationally expensive operation. Now what if you wanted to use those files you just copied? The computer is betting that you will, so it kept the copy in RAM around so that it doesn't have pay that cost again if you do.

Now here's the kicker that addresses the heart of your question: Does having 5.66 gigs of data in the file cache really only leave you with 250-400 MB of RAM available? Nope. That 5.66 GB is still free as far as the operating system is concerned. Why? Because the computer can dump that RAM in a nanosecond if it were needed for something else. It is more beneficial for you to have your RAM filled with cached copies of stuff than it is to have it sitting empty doing nothing. The smarter the operating system is about what to cache, the faster your computer is.

Even though that program is telling you the truth about how much RAM is being used, at the same time it is misrepresenting the amount of RAM you have available.

Open up the terminal application and activity monitor. In terminal, run

It will say it is not able to perform the command, thats normal. Now run

Your computer might prompt you would want about using sudo commands. Not sure your level of computer skill but sudo commands if used wrong or entered improperly can seriously mess with your entire operating system.

Your file cache should be cleared if you check your activity monitor it should show the reduction in RAM usage on your Mac.

Use Diskinventory X to find files and folders that are taking too much space on your computer. You should see the " file cache" folder and be able to delete it.