I need to run a script when the computer shuts down or restarts to remove some files. I know there is a registry key for autorun.. but I couldn't find something for shutdown/reboot.

[update] I want to do this on Windows 7 Home edition, so I don't have the group policy editor.

The easiest way to do this is with a local group policy.

To do this, go to your local group policy editor (Click Start, type gpedit.msc in the Start Search box, and then press ENTER.)

Once this is loaded, go to the following path: Computer Configuration > Windows Settings > Scripts (Startup/Shutdown) > Shutdown (See Below) 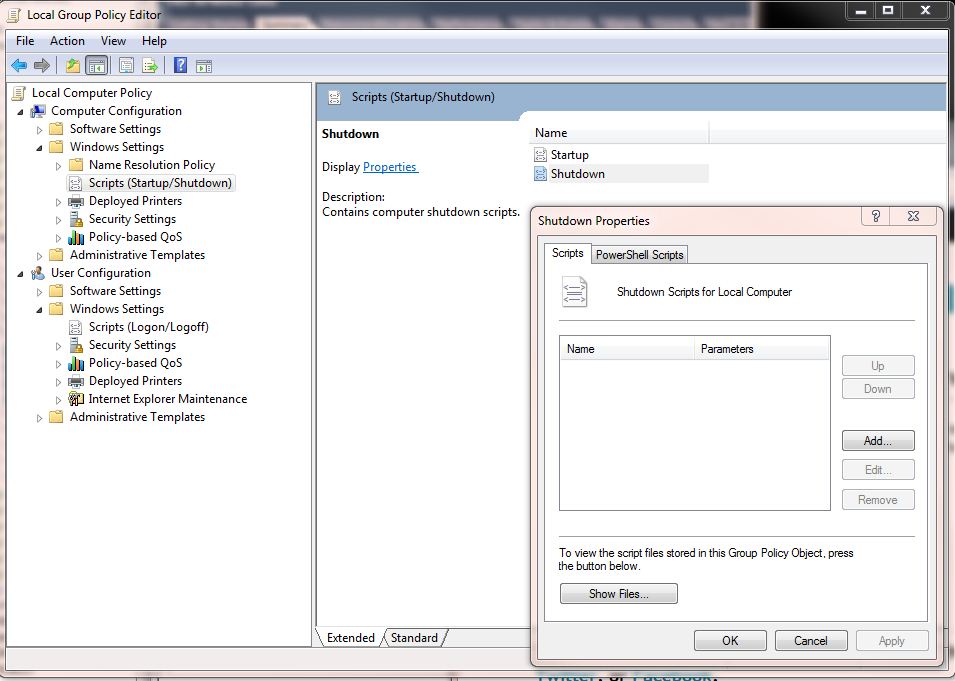 Within here, you can choose to select scripts which will run on your machine as part of startup/shutdown. You can also follow the User Config > Windows Settings > Scripts (Logon/Logoff) to setup scripts which run at logon and logoff.

Startup Runs before a user logs on. Startup scripts execute as the local system account

Logon Runs as soon as a user has entered their password. This executes as the user who is logging on.

Shutdown Runs after logoff and only as part of the machine shutting down. This runs as the local system account.

This the path of registry

Launch the Group Policy Editor by clicking Start, then type gpedit.msc and hit Enter. Now navigate to the

Add your script there.

Check this for home edition:

First is first, thanks for pointing that with GPEDIT.MSC (manually installed on Windows Home) can be added Startup, shutdown, logon and logoff scripts.

But, how can that scripts (logon & logoff) be run with elevaled admin rigths?

I had also tried the Task Scheduler and logon works, but logoff do not work ... and i am desperated/frustated.

What i need is to run this command at Windows start:

And what i also need is to run this other command at Windows reboot/shutdown:

But at a point that takes effect; please note if i manually run the command (in task scheduler) to set that value to 0, if i run it just one second before click shutdown/reboot it works, no pagefile cleared (take in mind 1GiB SSD is Veracrypt full system encrypted).

Note: The computer has 256GiB of pysical RAM, i can not put 512GiB becuase of such application, it is so weird that requieres a 1GiB max size system drive or refuses to let you use Windows (sure you noted, i hate that app but i am forced to use it and they do not pay me for SSD every week or so), it also forces a reboot every 45 minutes, so makeing counts, 0.5GiB every 45' = 16 TiB per day (480 TiB per month) only just because clearing the pagefile... i hate it... not to mention time to shutdown/reboot increase a lot (if every reboot/shutdown is done at max time that app allows, aka 45', of every hour a total of 16' is dedicated to clearing pagefile, at 24h that is >6h on that clearing pagefile per day if you use it 45' every time; 550MiB/s speed), now i think you can understand my interest of avoid such clearing (mostly the SSD live but also time).

EDIT1: I had seen that Task Scheduler command is run (at shutdown/reboot) and registry key is set to 0, but at that shutdown/reboot it takes no effect, the change is done too late; so it must be a question to find an event that triggers sooner, since (User32 1074 and/or WinLogon 7002) does not trigger soon enough, user logout neither, computer lock neither; all of them are triggered too late.

3
Run a script at logoff on XP Home?
1
Can I remap the Windows 10 restart button?
0
How to shut down or savetate VMs (Virtualbox) before the host is turned off by the UPS shutdown signal?

20
How to force a "do you really want to shutdown?" dialog in Windows 7?
2
Disable task manager for restricted user on Windows 7 Home Premium
6
Enable password-blank Run As on Home Premium?
6
Windows 7 - How to run a script at shutdown but not at logoff
10
Hide admin account from (Windows 7) login screen *without disabling* it
0
Modifying script to capture login/shutdown times in Windows
1
Prevent Windows 10 from log off, restart, or shut down with open files/programs