Can I reverse my Logitech keyboard's touchpad scroll direction?

Is it possible to reverse the vertical scroll of the touchpad on my Logitech Wireless Touch Keyboard (K400r) in the Logitech Setpoint program?

Short answer: No, not in SetPoint.

In a relevant post in the Logitech forums from 2013 August 8, a Logitech support technician states

This was my experience, today. Based on another forum post from a different Logitech support tech, I installed SetPoint in an attempt to accomplish the same goal (reverse scroll direction on a Logitech K400 wireless keyboard/touchpad combo) and fiddled with it for a couple of hours.

Long answer: Yes, if you are willing to do some registry surfing.

The technician goes on to cite a registry edit "for the sake of information". Specifically:

Then, the tech discourages the reader from manipulating the registry. Reasonable advice, considering that the suggested edit is not straight-forward.

I am using the Logitech Unifying Software on Windows 10 and have additional pointing devices attached through the unifier and otherwise. At HKEY_LOCAL_MACHINE\SYSTEM\CurrentControlSet\Enum\HID, I found 18 member keys with names that started with VID_046D&PID_C52B but continued with additional specifiers. I.e. by studying the values in the subkeys, I eventually determined that my Logitech wireless trackball (a separate device) was represented as:

and the trackpad component of my K400 was represented as:

Each of these keys has a complex-looking subkey that itself has two subkeys: Properties (protected against access) and Device Parameters, the one we are looking for. On my system, the particular FlipFlopHScroll and FlipFlopWheel that I wanted were found in:

If you can identify the correct path for your setup, right click on the two FlipFlop data elements (to Modify... in regedit) and change them from 0 to 1. I noticed the desired effect after I restarted my machine.

To aide your search, try searching the HID key for the string logitech. The 'complex-sounding' subkey for the appropriate subkey of HID will have some helpful info. Specifically, my

has the data element named DeviceDesc with the value

On my system, this was one of two such keys. (I have two mouse pointers managed by the Logitech Unifying Software.)

In late 2020, Logitech Options allows this configuration (at least for the Logitech K400, which DOES answer the OPs question) 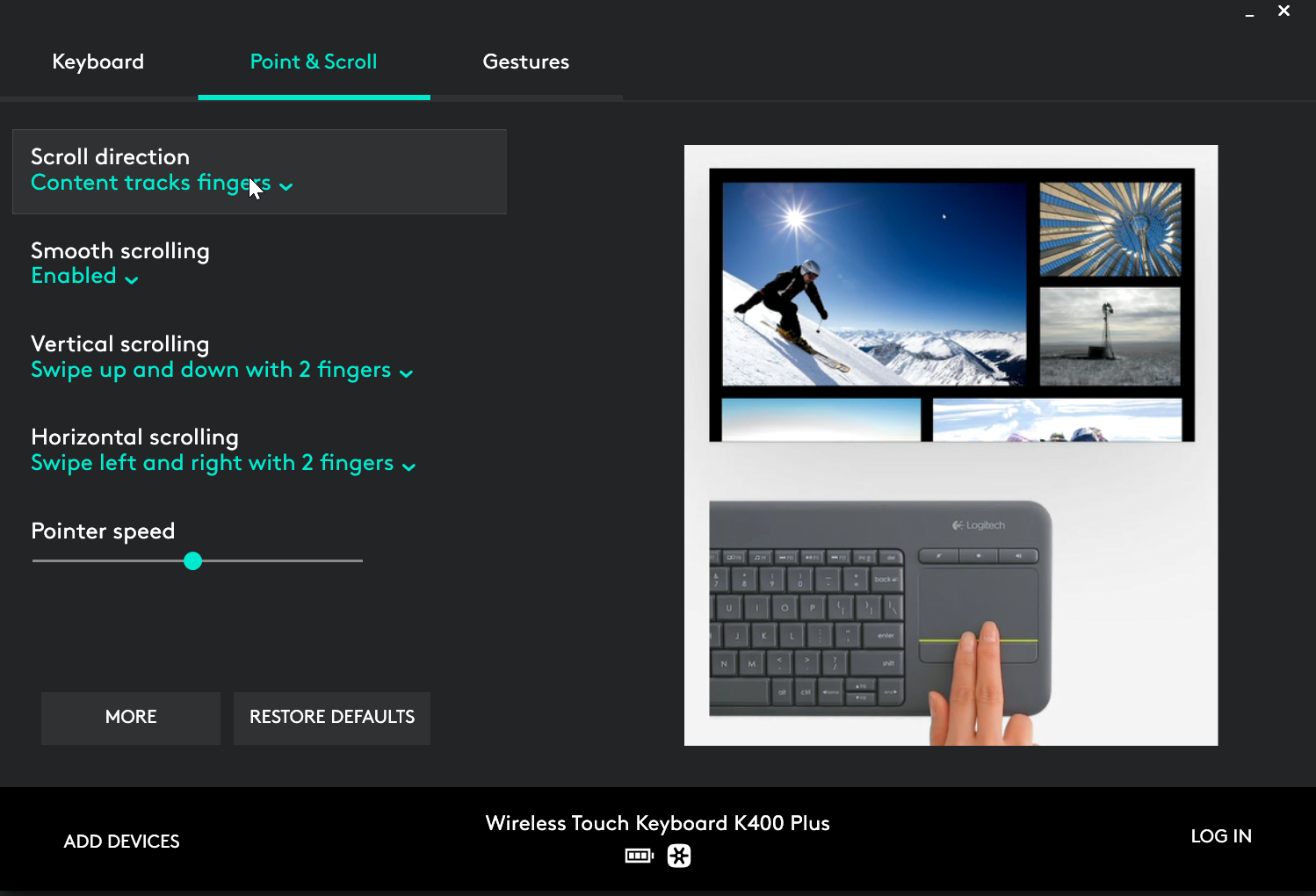 Wow....Logitech Options software is a 201MB download. Which is a behemoth just to change a registry key. :\

Well I went ahead and tried it, on Win7, for my K400. The software seemed to be only looking for a K400+, so it never could find my K400. It also introduced a phantom "stuck arrow key". So I had to pull the dongle out and de-install "Logitech Options". Then that problem went away.

So I had success with the direct registry edit, described above. However, I recommend an easier way to find the correct key:

{Mod: I couldn't find a way to ask for my edited answer to be re-instated, nor was told it would automatically be reconsidered after the edit, so I've gone ahead and re-posted this as a new answer. Please let me know if I'm missing something, as I'm new hear and keen to learn how things work. :) }

Not the answer you're looking for? Browse other questions tagged windows-8 logitech-keyboard or ask your own question.

0
Logitech Wave keyboard media control buttons control iTunes?
9
How do I get my Logitech media buttons to control Spotify
3
How to reverse the scroll direction in Windows8?
6
Control Google Music with keyboard media keys in Chrome with Logitech SetPoint 5.80.4
2
Can I pair lenovo wireless mouse and keyboard with a logitech unifying receiver?
5
How to map custom Logitech keyboard keys on Windows?