I have a Windows 7 64 bit system with 4 GB RAM and Intel i3 processor. I tried to install Avast 9 free antivirus and AVG in it several times, but I can't. I even tried to install it as admin, that too was unsuccessful.

Whenever I tried to install both, a Windows prompt appears(I clicked 'Yes' for it). The self extraction icon of antivirus program appears and nothing happens after it. Why can't I install antivirus ? How this issue can be solved ?

This is the screenshot of error message when I tried to install Avast 9 in safe mode. 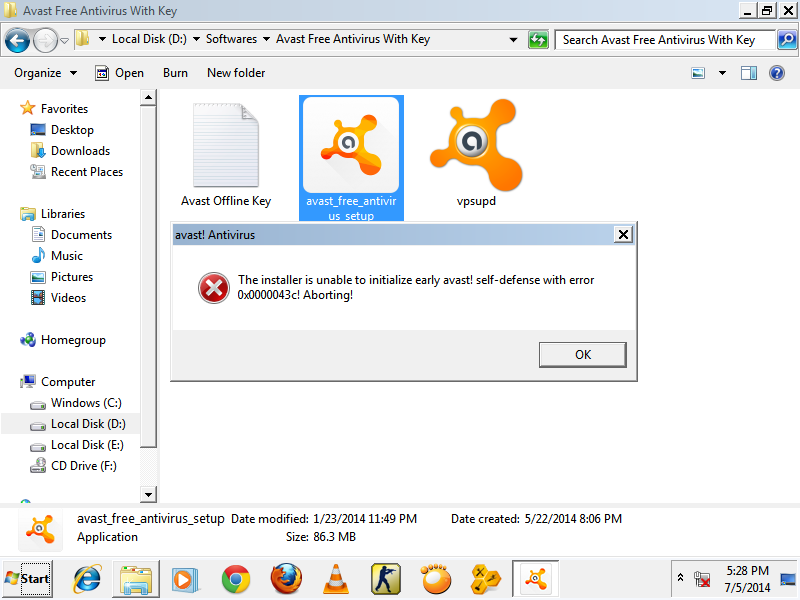 I encountered this as well, even in safe mode. Turned out to be some rogue .dll file watching for anti-virus installers, hogging resources when it found something.

Assuming malware (or some other infection), I would try trojan hunter, or maybe search & destroy.

Trojan hunter is what finally worked for me.

As said, it was a malware problem. I used Kaspersky TDSSKiller and I found the malware. Now am able to install antivirus.

It seems that the problem is that when your computer is extracting the files for some reason it is not executing the files. There are two way's of solving this.

The first and easiest way is to try another anti virus software (I would try this first).

The second more complicated way is to go to windows explore and type %temp% in the navigation bar and press enter. Then you must delete all the files in that folder. If it says This file is in use by anther process then just click skip. Then try to install the anti virus software again and it should extract the files into the %temp% folder. Then open up the folder(s) it makes and try running some exe files that are called something line setup.exe or install.exe or something like that.

Hope it helps. Let me know if it works for you.

Not the answer you're looking for? Browse other questions tagged windows-7 64-bit anti-virus or ask your own question.

465
How can I remove malicious spyware, malware, adware, viruses, trojans or rootkits from my PC?