I'm trying to change the format of a hyperlink cross reference to the typical blue underlined text. I tried following the instructions at this site: http://wordfaqs.mvps.org/formatcrossreferences.htm which recommends using the \*Charformat switch.

To make a global change the site recommends using Find and Replace with these parameters: Find: REF * \\h
Replace: ^&^c (where *Charformat was previously copied to the clipboard and the desired format is selected under the Format dropdown box)

When I follow these instructions the Ref field takes on the blue underlined format I want but when I hit Alt+F9 to hide the field codes the result is still a plain text cross reference.

I would really appreciate it if anyone can help me understand what I'm doing wrong.

If your REF fields have all been inserted in the standard way, i.e. with a space between the { and the "REF", then go through the process again, but in the FInd: box, put a space before the REF, i.e. use

(but without the double quotation marks)

That should apply the formatting you want to (almost) all of the text starting at the first space.

This problem is the result of an oddity that appeared in Windows Word 2007 I think. If you only have (say) English and other western European languages enabled in Word, applying the formatting to the "R" of "REF" should be enough. If, however, you enable certain other languages, you must have a space before the "REF", and you must format that space the way you want (the formatting of the "R" is ignored". SO Using " REF" and ensuring that both the space and the R are formatted as required should be enough. Typically, it is easiest to select the whole field and apply the formatting.

"other languages" certainly include languages that use RTL scripts, and Hindi, which leads me to suspect that it may be "any language that uses a non-Latin script". But I haven't checked extensively.

The definition of how \*Charformat is supposed to work has always been ambiguous. Early Word documentation talked about applying the formatting to the first character in the field, but at that time, Word did not insert a space before the field code name by default. So the first character would have been the R. Even the .docx standard documents do not clear it up completely (unless they have done so in the 2012 version.

I ran into this issue for a new employer.

Retain the extra spaces in the find/replace fields. They're needed to make this work properly.

Note: There's an extra space before REF, so it's actually, " REF"

The ^92 is a required backslash to make that *Charformat work.

Set the Style of the Find What to the font color and underline from Format>Font. Don't use a defined style.

Refer to the image 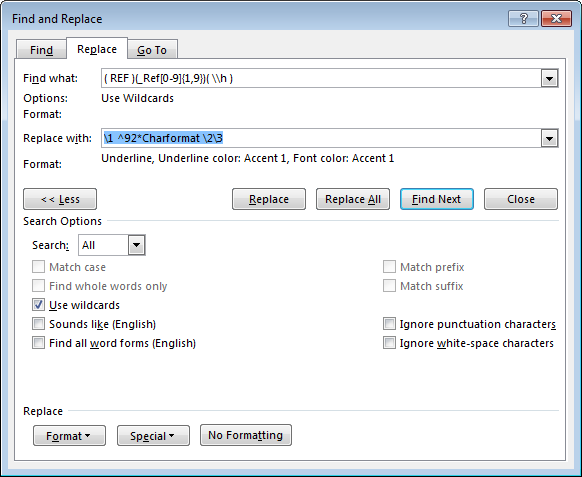 Note: If you've applied the formatting and it seems not to work, make sure that *MERGEFORMAT is not present in the field. That prevents the formatting from appearing.

Not the answer you're looking for? Browse other questions tagged microsoft-word or ask your own question.