What direction should case fans be mounted?

What is the true for fans situation?

Do all fans take away air from case?

Or can there be one with take in function, e.g. in front?

Am I right that have put two fans, front fan and one side fan to (IN) mode?

Or must all fans take air away?

Edit: a picture (not mine) for visual learners 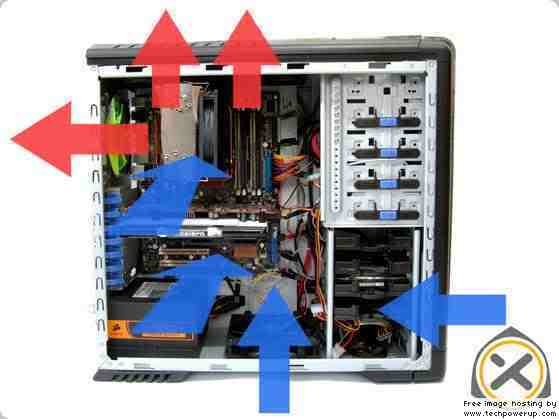 It's called 'air flow' for a reason... air comes in cool at one end & goes out warm at the other. It needs to pass effectively across all hot surfaces & take as much of that heat as it can along with it.

Hot air rises, so it's sensible to put inlets at the bottom & outlets at the top. Convention dictates that the front is 'cold' & the back is 'hot' - perhaps initially even for such simple reason as to not blow hot air at the user.

In a perfectly-sealed box, having all fans extracting would provide no flow, only a pressure-drop, as good as the fans were capable of maintaining - putting undue stress on them. Hot air would have no-where to go & no cold air could be brought inside the unit to replace it.

In the diagram in the question, it would make most sense to have front & side as input, back & top as output; which would give 3 fans doing each task - nicely balanced, plus the PSU fan, which isn't switchable.

Not the answer you're looking for? Browse other questions tagged fan cooling cpu-cooler or ask your own question.

13
Optimal Fan Placement and Direction for Air-Cooling a Computer

13
Optimal Fan Placement and Direction for Air-Cooling a Computer
0
What is the best position for power supply unit?
1
Do I need two fans on the radiator of my CPU?
0
Optimal fan configuration for two self-contained water coolers
0
Best fan configuration?
1
What is the difference between a CPU fan and a case fan?
0
Optimizing airflow with rear fan in a watercooled system