Here I have this file in Windows: 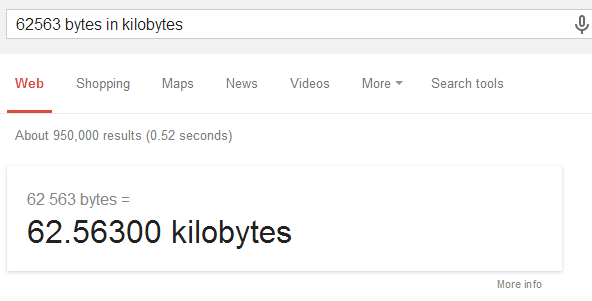 A kilobyte on the other hand is 1000 bytes, using the classic SI prefixes that you know from kilometers and kilograms. It's using the decimal base, 10^3 = 1000, so Google is actually right. If you had googled for the same amount in kibibytes, you'd have gotten the right answer in computing terminology.

It's really important to make the distinction between kilo and kibi these days, and actually, Windows should report it as "61 KiB" to be absolutely precise. This is the IEC convention for making the distinction easier.

That being said, there's still a lot of ambiguity these days, where hard drive sizes are typically reported in binary units (but not always explicitly), and connection speeds are given in SI units.

Yeah, think of google as the Mad Hatter. You have to ask the right question. Or perhaps an Elf: Sometimes your answer will be both yes and no. 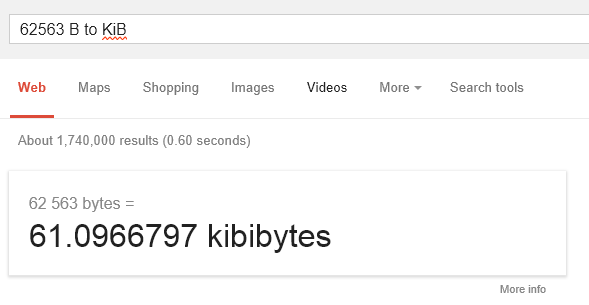 As a shortcut many people and systems treat a KB as 1000 since Kilo is the SI prefix for 1000. Computer scientists however use the prefix for 2^10 which is 1024.

Most computer-related numbers use binary prefixes, in contrast to SI system which uses decimal prefixes. It means that:

Not everything computer-related is based on binary prefixes, though, and this inconsistency often leads to misunderstandings. This Wikipedia page describes what prefixes are used for measuring different things.

But this one is false:

Not the answer you're looking for? Browse other questions tagged windows filesystems or ask your own question.

46
What is the difference between a kibibyte, a kilobit, and a kilobyte?
0
What's the actual download speed if I have Internet speed of 3Mbps?

8
Does Windows Move command delete the file only on successful completion?
1
Making very large file systems in windows with multiple RAID volumes
1
File sizes ordered by date
8
Making sense of the 2TB MBR partition limit
2
Why is there a huge discrepancy between file sizes reported by du versus ls?
2
git-p4 and huge file sizes
0
How can I get Windows Explorer to display file sizes in bytes, when the size is less than 1KB?