Are computers with more RAM potentially faster if not all memory is usually in use?

Let's say I have a computer with 16 GB of memory. If my computer is usually only using about 4 GB and never reaches 8 GB, is it any faster than a computer with only 8 GB of (the same type of) memory? Would my computer run equally fast by removing the other half of the 16 GB leaving just 8 GB?

Yes, because the operating system can use the extra RAM as disk cache, which speeds up access to data on disk.

Since every operating system manages memory differently, and none was given, I will answer in the context of Windows 7.

Below is an example from a computer with 24GB of RAM. Even though only 7 GB is currently allocated as "In Use" memory, another 10 GB is allocated as "Standby" memory and contains data that may or may not be read again. If it is read, it will make your computer "faster". The "Free" memory is not being utilized whatsoever at the moment.

If you'd like to learn more about memory usage in Windows 7, TechRepublic has a great article.

The ram that is unused has no impact on the performance of the machine.

However, the ideal situation is for the OS to use almost all available RAM. The OS and applications will request what they need, and the remaining ram should be used as cache - with a portion free perhaps to avoid swapping if an application needs more ram. Cache still counts as being "used" and will appear as being used in memory free tools.

Cache will take time to build up so you won't see this at boot. If after a while, the machine is still not using more that 4GB, then perhaps it is running a 32bit OS that cannot address more than 4GB (normally).

One other part to the equation is how the memory sticks are configured. Specifically, modernish motherboards support dual-channel memory which allows you to double the bandwidth between your motherboard and memory; if you had paired memory and you took out 1 of each pair, you've lost this and so your memory access when doing a lot of memory transfers will be diminished which should result in operations taking longer. (Contrariwise, if you happened to have 8 Gig's of faster memory paired with 8 Gigs of slower memory and were only using 8 Gigs, taking out the 8 gigs of slower and repairing the faster should allow you to run faster since you still get dual channel but not it doesn't need to slow down to the slowest memory)

But, in general, the caching stuff mentioned in other answers is going to be a bigger contributor to overall performance.

Removing half of your 16GB of memory will slow your computer down.

This holds even if you never use close to 8GB of memory.

The software side of it is covered in other answers and boils down to the OS chosing to use RAM rather than disk.

However you might see a hardware driven hit to performance by halving the amount of RAM available. The reason is that RAM buses uses multi-channel architecture, meaning that the computer can transfer data between multiple RAM modules simultaneously.

Probably you computer is dual channel. In which case you can remove 2 out of 4 4GB RAM modules with no hardware mandated performance impact. However removing 1 out of 2 8GB RAM modules will impact performace.

If you have a quad channel RAM architecture you will see a performace hit even if your ram is 4GB modules.

If the memory is ever maxed out or 99% you are going to lose speed because of the page file which sits on the hard disk. The hard disk can not even come close to the speed of RAM being that RAM is directly accessed by the cpu depending on bus speeds.

Windows uses about 3-4 GB idle of ram not counting other applications. I have been running 16 GB for years now and never actually needed more than 8gb. Realistically the avg PC users never uses more than 4-6 GB say for gaming. I have only seen it get close to 12 gb once when compressing a movie or doing something RAM intensive usually has to do with multimedia and multiple core CPU's would be the only way you would need more than 8gb. and yes it would run just as fast. IMO. 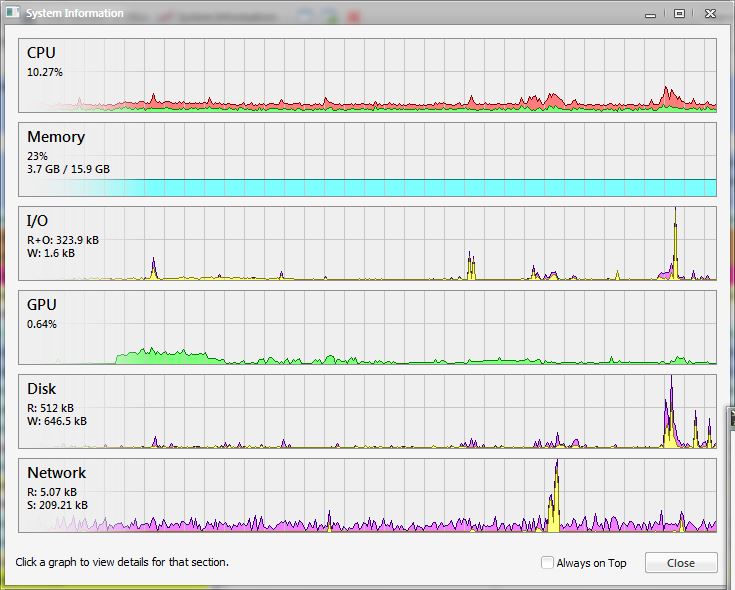 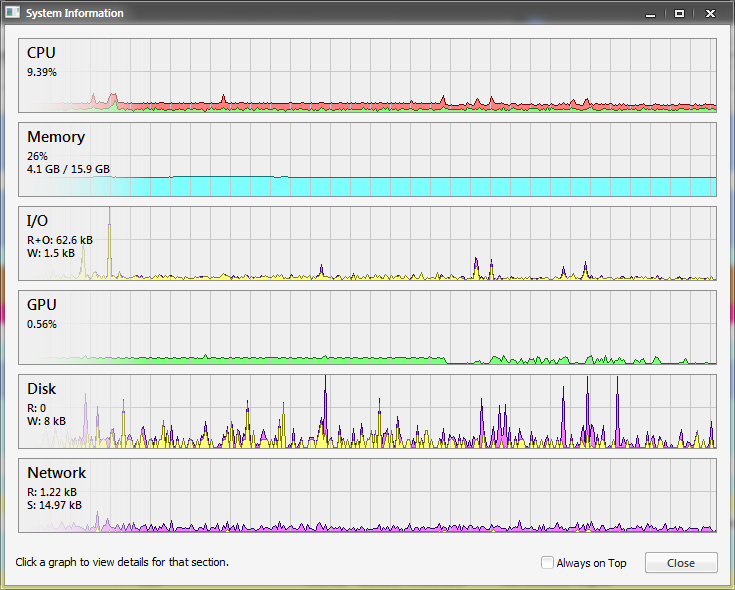 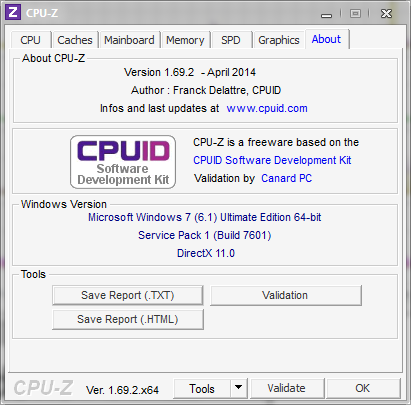 In terms of Windows 7 utilizing RAM to make certain process's faster here is an example. 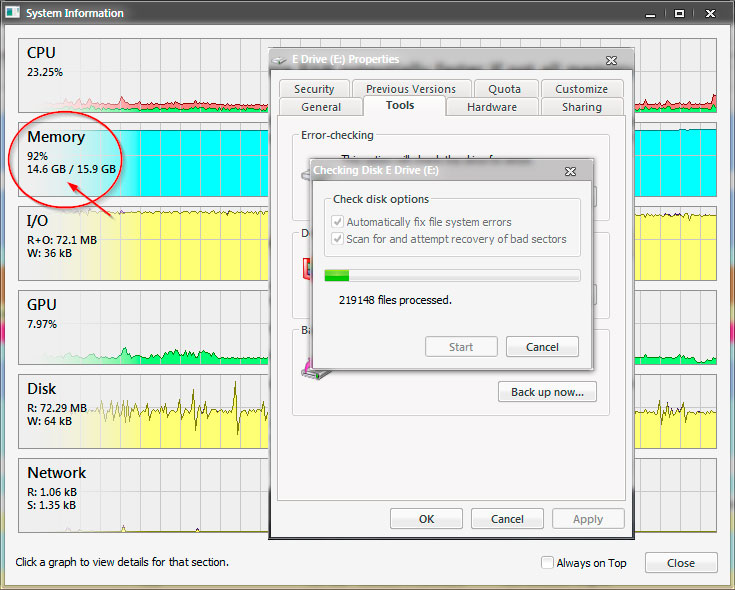 Chkdsk maxing out RAM to speed up caching in turn speeds up performance and disk checking time so in this case more does in fact = faster...

In practise the answer is more likely to be "NO" to the question as stated. The Q. says "(usage) never reaches 8 GB" and mentions "same type of memory" thus the most likely factor affecting speed (disk buffering) wont be affected. A common practical example is database servers with enough memory to buffer the complete hard disk - eg with 4GB of files and 2GB of process/system allocated memory doesn’t benefit from more than 8GB of memory.

More memory can slow Hibernation - on my system with 32GB of memory and SSD disk a cold boot is significantly faster than awakening it from hibernation as it saves the whole 32GB on hibernation, but a cold boot requires much less to be read. Reducing memory would speed the system.

It Would be faster if you accessed more of the hard disk and most people have more disk usage than memory left over for buffering, so extra memory helps. Also many O/S report only part of the usage as "usage" and the rest is counted as buffering not "usage". (Linux reports usage both inclusive and exclusive of buffering).

Memory channels affect performance: [If removing memory means you reduce the number of memory channels in use then the system would slow down as Foon correctly pointed out]

Memory fragmentation is another reason to have extra memory. If you have 8GB of RAM, and you tend to keeo it 80% utilized, particularly in modern use cases (with lots of memory swapping, such as from opening and closing browser tabs) you will eventually get significant fragmentation.

Adding the extra 8GB of RAM makes it more likely that the OS will find contiguous spaces of memory available, meaning less frequent reboots are necessary to avoid performance degradation.

Possibly, but not necessarily. Among other things, one of the things RAM allows a computer to do is permit application to allocate memory that they may never use. If the system doesn't have enough backing store (which includes RAM) to permit every allocation it has issued so far to consume as much memory is it possibly could, the operating system will either have to refuse those allocations or overcommit. Some operating systems never overcommit and pretty much all modern operating systems limit the amount of overcommittment they permit.

So memory that's not in use can improve performance by allowing operations that might potentially require RAM to succeed where otherwise they would fail.

Computers have their physical maximum speed(this includes overclocking too) and nothing can make them faster than that.

Not the answer you're looking for? Browse other questions tagged memory performance or ask your own question.

9
Can SSD raid be faster than ramdisk?

1
What's the point of getting faster RAM if i7's are spec'd at DDR3-1066/1333?
2
Will 1066Mhz RAM Damage Computer That Does Not Support More Than 667Mhz?
3
Does ReadyBoost slow down systems with more RAM?
3
If I run a 32 bit OS on a computer with more than 4GB of RAM, which RAM sticks are used
5
Which RAM is faster (or, is Crucial's Memory Advisor giving non-optimal advice)?
1
What drawbacks are there when using memory that is faster than what is rated by the motherboard?
0
Win 7 w/ 8 GB memory, unable to use more than 4 GB
0
Why would new ram run substantially faster than old ram with identical stats after failed sticks?