I asked this question a while ago but it got lost, so I deleted the previous one and created this new one with updates from the comments.

I just installed Windows 8.1 in a partition of my Lenovo Thinkpad T420 which also has an Ubuntu partition. As usual, GRUB was lost so I entered with a Live CD and recovered it succesfully, being able to boot both OSs.

The issue is that I already had a shared logical NTFS partition and I can't access it from Windows now. I entered Computer Management and the partitions are there but are shown with 100% free space. This is pretty obvious with the Ext4 partitions, since Windows can't access them, but this also happens with the NTFS partition, as shown in the following image.

I googled about this and ended up using DISKPART in order to manually mount my partition, but I got an error that says my partition is not assigned to any volume, and when I list them, no volume is shown for the partitions shown in the previous list in the following image. 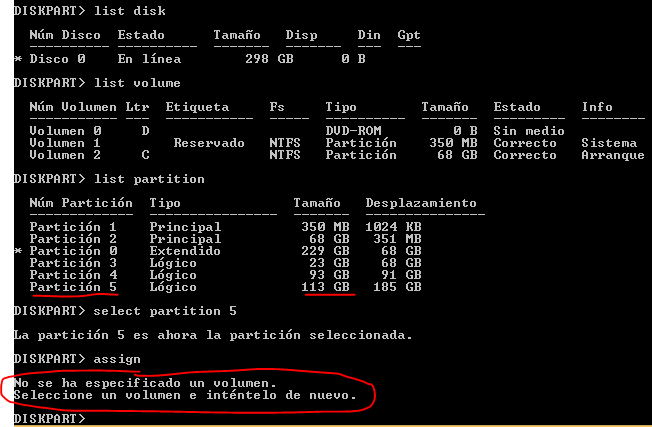 If I run fdisk -l on the partition it says it can't be opened.

There are many disk recovery tools.

You can use for example TestDisk.

It is possible that some partition parameters are not written correctly in header so partition is not recognized properly.

Not the answer you're looking for? Browse other questions tagged windows-8.1 multi-boot diskpart logical-drive or ask your own question.

1
Creating bootable NTFS partition on Debian
1
SSD vs HDD boot
2
Partition does not have a volume
8
How do I mount a multi-disk Windows NTFS RAID/logical drive on Linux?
1
Not able to recover logical partition using TestDisk