Can I repair a physically broken USB drive?

My friend just wrote to me, all in panic, that he had broken his USB with his math homework for tomorrow. (Yes, no other backups, just that.) It looks like this now: 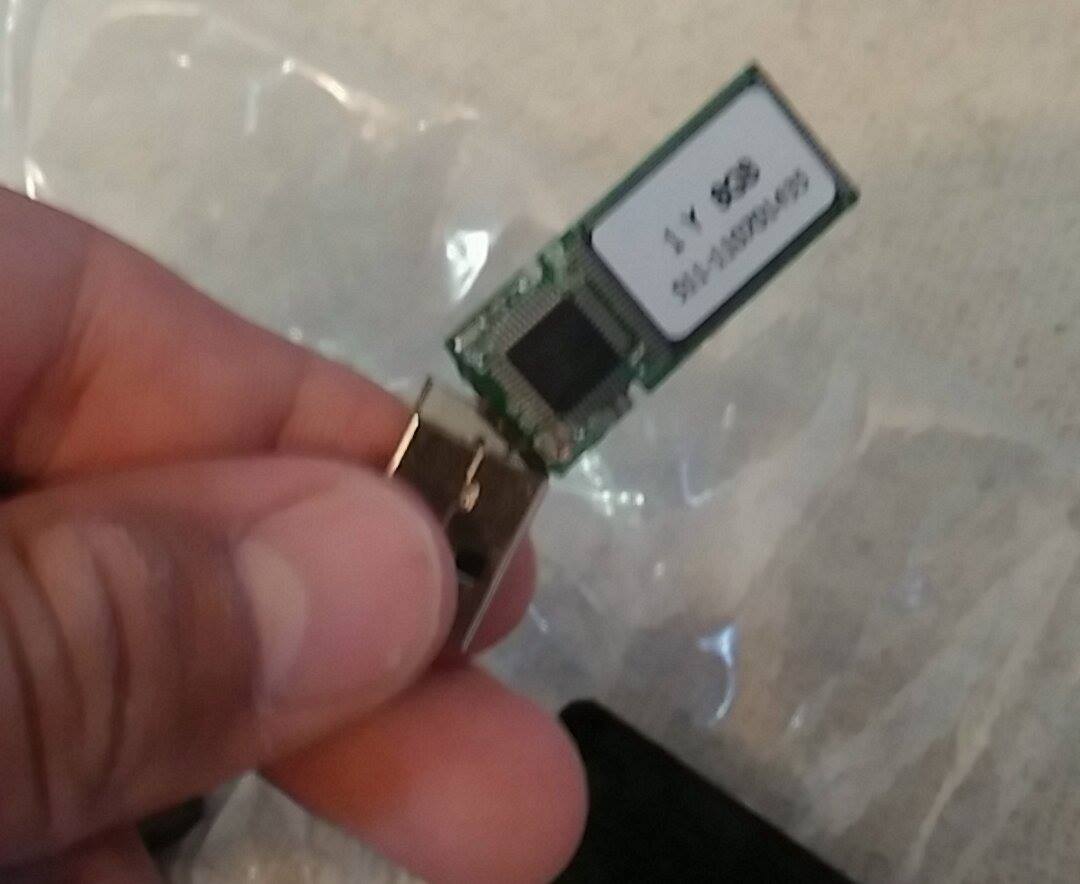 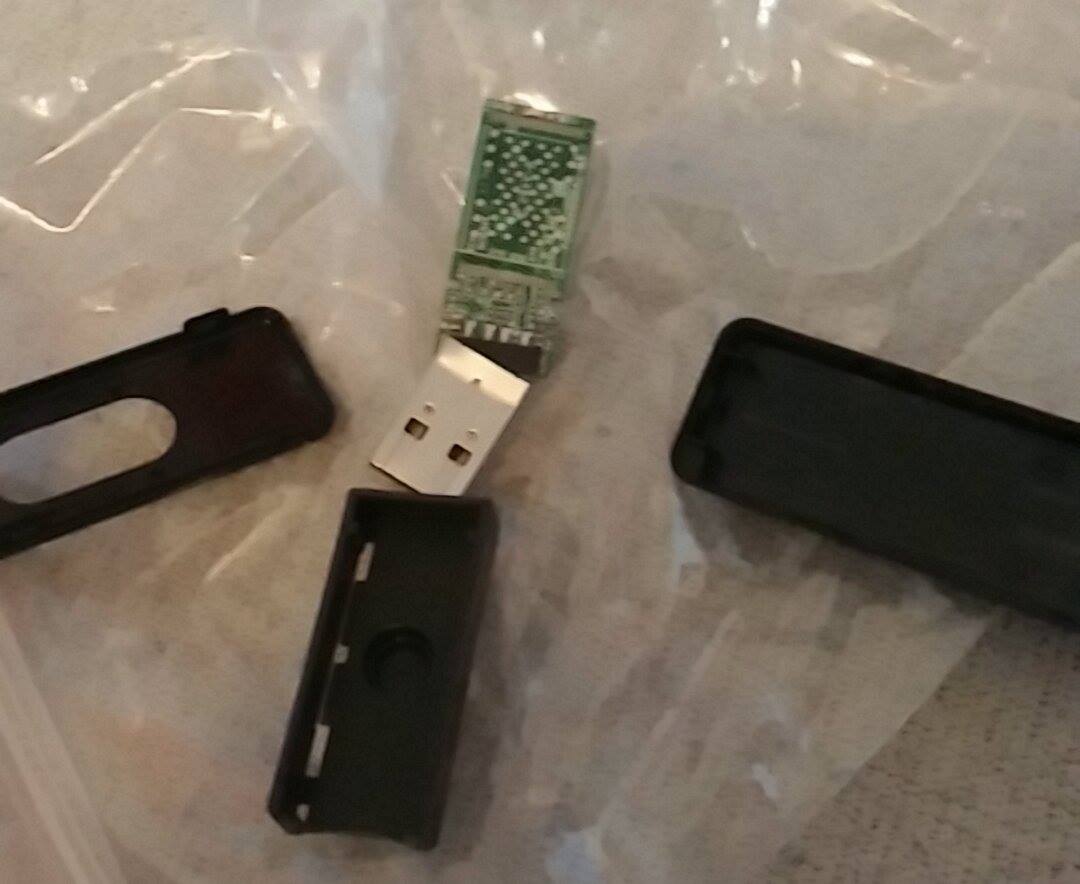 Is there any way that I could fix this? My thinking is soldering it together but I want to hear if anybody has experience with this or any tips?

Another option would be to see if Word has saved the file as a temporary file, but in the places my friend has looked there was nothing.

I broke a capacitor off a (very expensive) video card once. I am not the best with a soldering iron, so I didn't want to risk ruining my card. I brought it to a TV repair shop in my area and the technician was able to solder it back on. It cost me $30, I think. That might work for you.

To me that looks fixable with a fine point iron and multicore solder. You may find it easiest to bridge the gap with wire rather than attempting to put it back into its original shape.

Alternatively, if you don't have a soldering iron, you may just about be able to strap it up with tape to make contact - I've done this on older hardware but never on USB.

Whatever you do though, don't try to write to the drive. With word that means don't open the file from the drive, copy to a PC and open from that copy. The reason for this is that if your repair fails during a write you will lose the file completely, never to be readable again, during a read this shouldn't be true. Word and its autosave features etc. are not to be trusted not to write to a file when you don't expect it.

Too late now of course, but as I used to tell undergrads when teaching them: Losing your data is a rubbish excuse that won't get you anywhere. You can always (in their case) store it on the network and email it to yourself, and put it on a USB stick.

All the answers so far that said it was fixable have been focused on resoldering the USB connector. While this could work, the connector is likely broken, finding a replacement is hard and soldering a connector like that isn't too easy for beginners.

A possibly easier way is to take a USB cable (eg. extension cable, phone charger cable) that has a USB A connector on one side (the normal big PC kind, like the one on the drive), cut the other end off, strip the wires and solder them to the board.

For best results, try to keep all the wires a similar length (due to the relatively fast data rate of USB), watch a simple soldering guide first and also twist your wire ends and pre-coat them with solder.

There's a faint chance it may still work if plugged into a computer... very carefully. If it does, get all the data off it then trash it. If it doesn't, I'd say game over - I wouldn't put a soldering iron anywhere near something that delicate.

It's hard to see from those blurry photos, but it looks like the pins that are inside the usb plug have snapped off from the circuit board. Plugging it into your computer probably won't work and risks doing damage to your motherboard. If it's just the solder joint that snapped (a so-called 'dry joint'), someone who's good at soldering might be able to repair it. If the copper pads or traces on the PCB got pealed off when it broke or if the usb pins are snapped then re-soldering will be very difficult.

First of all, don't let your friend near a USB flash drive EVER again! :P Apart from that, soldering is about your only option.

If you have a Raspberry Pi or old computer that you wouldn't mind if you fried the port, you could try carefully plugging it in. Like already mentioned, a USB extension cable will give you the access to more carefully plug it into the computer. If you're that desperate to risk a perfectly good computer, go ahead and use your main one.

If you can see a break in the connection, don't do it. Worse things could happen than your math homework missing.

As for soldering, it seems like it is only the connector that is damaged. If the PCB is fine, you could do this:

If it has some sort of read only switch, I'd advise you to use that to make sure that you don't corrupt the file.

I've fixed usb drives (and several other similarly broken pieces of electronics) before with a soldering iron. Often, all that will be broken is the original solder from when it was manufactured (you'll see a tiny hairline crack in it where the connector wire broke away from the board, look on the backside). Remelting the factory solder to reestablish the connection often does the trick.

Just make sure you get a soldering iron with a fine tip. This is really hard to screw up so long as your hands and eyes are in reasonably good shape. Go slowly and color within the lines.

The device board is the same width as the USB connector. It may be possible to remove the broken USB connector and insert the device board stub into a USB patch cord female end. Use a piece of cardboard inserted with the board to take up the slack. The board runs will act as the male pins. If the spacing is correct,The chance of short circuit will be reduced. If cardboard is not used, put a piece of tape on the board back to insulate the board from the USB jack's metal shell.

AndyAndy
1
Add a comment  |
Highly active question. Earn 10 reputation (not counting the association bonus) in order to answer this question. The reputation requirement helps protect this question from spam and non-answer activity.

Not the answer you're looking for? Browse other questions tagged data-recovery usb-storage or ask your own question.

0
Is it possible to retrieve data off of a (possibly) damaged flash drive?