Is the beginning file on a SATA HDD the same as an SSD? [closed]

Having a hard time finding the answer to this.

The beginning sector for standard user data on a HDD (sata, scsi, or ide) is always the same.

First question: Which sector is it?

Second question: What is the comparable sector on a SSD?

The beginning (logical) sector for any disk is #0. The next one is #1, and then #2, and so on and so forth. That's about all that is certain. Everything else is either software dependent (the contents of that first sector depend upon the disk partitioning scheme and the purpose of the disk, and have nothing to do with the underlying disk technology), or hardware dependent (the physical sectors that the logical sectors map to may be on a spinning platter, may be in a NAND chip (SSD), or even may be something that exists over a network or over the Internet, but this has no bearing on software trying to use the disk, other than perhaps latency of disk access).

When you're talking about sectors and SSD/HDD, the entire concept of a "file" doesn't even exist (it's created by the software that runs on top of the drive. The drive itself doesn't know what a file is, where it starts, or where it ends).

To give an extremely simplified overview:

A modern "drive" merely has to do three things:

In theory, anything that can respond to those two commands could be made into a disk drive. The rest of the computer does not care at all how the data is stored, only that it is stored. I could write the data down on lines of paper and type it back in when the system requested it, for all the system cares.

A drive consists of two parts: The disk controller, and the storage medium 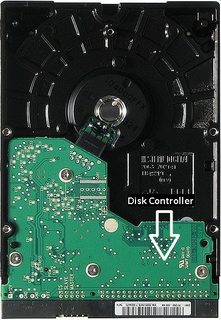 A Typical* X86 system will ask the boot disk for the contents of the first logical sector, and attempt to execute it as code to start booting up the system. It doesn't care if it's the first sector on the 4th head of the 3rd cylinder, or if it's the 3rd track on a DVD, or the 15th NAND flash chip in an SSD.

(* I say typical because it's entirely possible to have a system that boots up from a different logical sector, it just requires a custom bootloader)

When the OS tries to read a file, it'll look up the location in the filesystem metadata (which is usually not a FAT/table these days, rather a tree instead), and then it'll request the logical sectors from the drive which correspond to that file ("I need sectors 200-400!"). It's entirely up to the disk controller to translate those logical sectors to physical sectors on the storage medium and retrieve the data.

Not the answer you're looking for? Browse other questions tagged hard-drive ssd sata sectors or ask your own question.