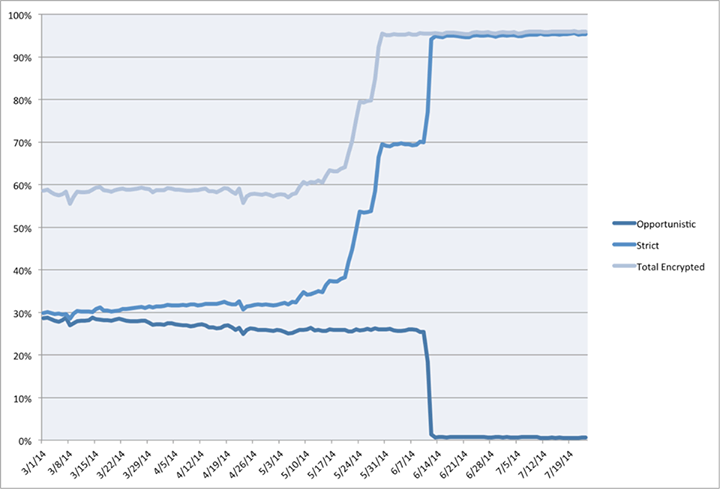 Question: Does the good (more encrypted mail) has a bad impact on SPAM filtering?

SMTP STARTTLS is transport encryption. That is, it encrypts the connection between two mail servers as they relay mail. It does not encrypt the mail stored on the servers.

Basically, email travels across the Internet similar to this:

Your ISP may actually have a few mail servers the email traverses, so too might the recipient's. And of course if one of the mail clients involved is webmail (e.g., GMail), then there may well be other protocols involved.

The least-secure part of this is when the mail is being sent between your ISP's server and the recipient's ISP's server. That was, traditionally, a completely un-encrypted connection across the Internet. The graph in your question is about securing that connection.

Spam filtering has always been done on the cleartext version, and STARTTLS does not change that.

Encryption with GnuPG or S/MIME, on the other hand, encrypt the message before it leaves your machine. Then none of the mail servers have access to the cleartext, and hence that would impact spam filtering. Note that while STARTLS encrypts the entire SMTP session (including the sender and recipient addresses), GnuPG and S/MIME do not; they need to be in cleartext, otherwise the mail servers wouldn't know where to send the mail.

SPAM and encryption are completely unrelated.

The post basically just says that the number of mailservers accepting STARTTLS has increased, which results in more emails being sent encrypted.

You can now figure that most spammers won't bother to use encryption, but that would only have an impact if said mailservers would not relay unencrypted mail.

I imagine that virtually all of these mailservers do still support unencrypted transmissions.

Not the answer you're looking for? Browse other questions tagged email or ask your own question.

0
How does the spam filters of big email providers cooperate with mail clients?
1
Gmail SMTP Errors and False Positives: “The email account that you tried to reach does not exist”