I’m attempting to replace faulty RAM and I am trying to understand the meanings of the label to make correct decision.

I have a 2GB stick of SAMSUNG RAM which appears to have gone bad.

Doing a number of searches, I ended up finding this site which lists the manufacturers part number as:

Notice there is a difference my stick has 1051 but that website lists it as 1110.

What is the meaning of the part number, and the last 4 digits?

Is there a significant difference between the 1051 and 1110 that affect the machine?

Did you try to Google for 'Samsung RAM part number'. The first hit (on my search) lead me to this site (archive), which exactly answers your question. Here is a picture of what's there: 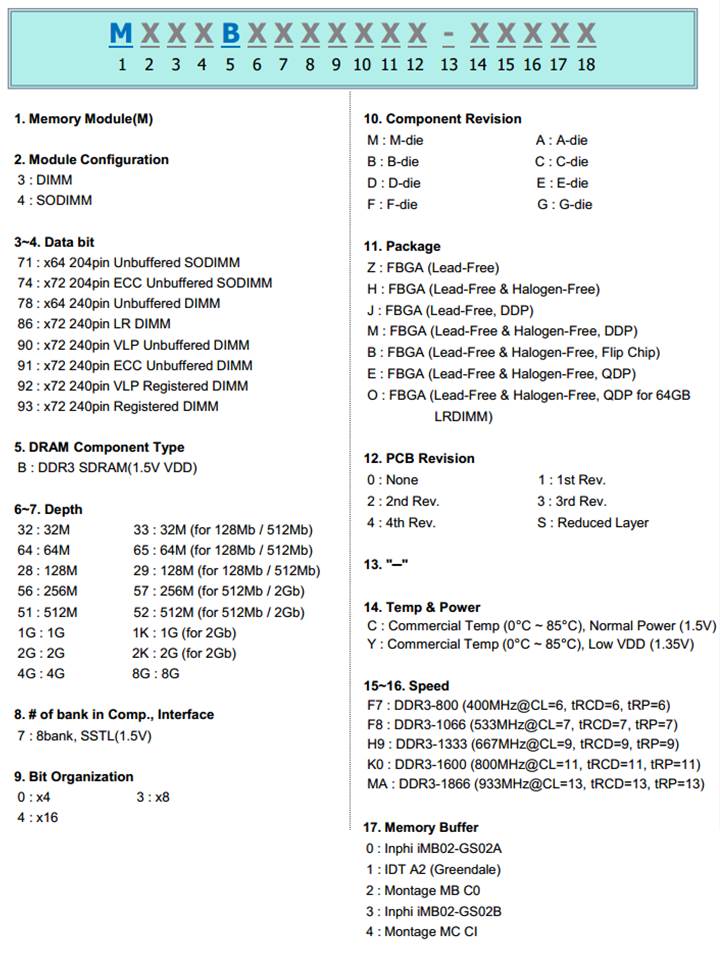 But, as stated by @user2196728 in the comments, part numbers are not the numbers you need to worry about when you're replacing the RAM. The following spec's must be the same for the RAM to work:

In order to make optimal use of dual channel (generally, it helps a bit) the following specs should be the same:

When you replace all your memory or you buy a new computer, it is cost efficient to buy a pair of chips from the same manufacturer.

Just meeting specs does not mean the RAM will work in your computer. Samsung RAM is used in many HP desktops. Some older HP computers are strict on RAM. They have to have Low density chips on the boards. So, even though you match all the specs, but insert High density RAM on the HP boards, it won't work, you'll just hear beeps.

Every constructors have its own part number for its product.

In your case, where you want to replace a faulty RAM stick, the part number is not important.

The most important things to consider are technical specs : Speed, Frequency, Type etc...

Find a RAM stick with required technical specs, regardless any part number.

It gets complicated. For maximum compatibility, matching the manufacturer and complete part number (except for the date code) is the easiest way to go without having to think.

But that might lock you into a more expensive part when another one should be compatible too. So for maximum flexibility, or to optimize perofrmance, you have to understand and match a number of variables.

First there are the DDR generations (DDR-DDR4) they are not even physically compatible, so you jsut have to look up what your PCU/Motherbaord expect.

Let's focus on DDR3 now, to look at some of the more subtle compatibility issues.

We'll start with functional compatability (get these wrong and your PC won't boot) The well known ones are Buffering and ECC. Servers tend to have both, laptops tend to have neither.

In both cases, you either have it or you don't. If you don't it's easy, but if you do have it, then you have to pay attention to what kind of buffering or ECC is going on.

Buffering comes in 2 kinds: Regular or Registered and LR or Load Reduced. (NOT to be confused with Low voltage) Regular is best when you want fast memory, LR is better when you want to put as much memory as possible on each CPU.

The way ECC gets implemented depends on the number of bits on each physical memory chip. That is the "x-Value" that appears in 2Rx8, 2Rx4, 2Rx4, etc. The memory controller can handle either one, but they have to match. x4 is slightly preferred because it can correct for more types of errors, but it is not any faster. (in practice, all we really use is error detection. Memory is very reliable, but if it starts dropping bits, you replace it ASAP, rather than relying on flamboyant error correction algos)

Then there is the matter of Rank (also called "high" vs "Low" density or Single vs Double sided). Think of a stick with 2 Ranks as having 2 logical sticks of 1/2 the size mounted on one physical stick. Higher rank allows more interleaving, and higher capacity modules, but it adds overhead. Generally 2R is the fastest. 4 or 8R will show up on big LR type modules.

Finally there are issues that I call "perfromance compatability". Mess those up and your computer will still boot, but it might run slower or hotter than if you get it right.

These are chiefly speed and voltage levels. Low voltage chips will typically work at the standard voltage, but you can't use standard chips in a system that is set up for low voltage. (secretly the voltage is adjustable on many mother boards, either by you or automagically by the BIOS)

Speed is more accurately thought of as Speed Limit, or best case speed. If you mix modules with different speeds, the system will operate at the lower speed. But speed also depends on which modules you put where. Putting multiple modules on the same channel is very likely to result in the system deciding to lower the clock speed.

Loading is not a big deal on a laptop with only 2 slots, but on a big server that has 2 CPUs, 4 memory channels per CPU and up to 3 Banks per channel, it can affect the speed a great deal. (We are talking factors of 5x or more, just by rearranging how the sticks are loaded into the slots)

The right way to load them is to load the channels evenly, with identical modules in each bank and compatible modules across banks.

A lot of the documentation is terrible, but the rules tend to follow the CPU around. I found this Fujitsu paper that explained my Dell Server (using the same Xeon CPUs) much better than the Dell documents did!

It's actually kind of interesting, if you are the sort of person who likes walking on broken glass or removing band-aids slowly.... :-)

I haven't even mentioned "CAS Latency" which is another performance variable. Think of clock speed as how fast your legs move when you are running. Then latency is how long it takes you to get out of your chair and take the first step, after being told to start running.

You can get all the gory details here, if you are in to that sort of thing....

Samsung PC3-10600U is the main objective.. Make sure the RAM you are buying says PC3-10600U then look up your model number of your machine.. for example ..Dell has a express service tag that helps you find a owners manual .pdf on their website, use it to find out the max GB of RAM your machine is compatible with and go from their.. Windows 10 runs best with at least 4 GB but will run with 2 GB just often very slowly and if you can't get it past 2 GB then nothing you do will help you speed it up.. Parts numbers just tell you what week and year the chips are made.. Which is almost irrelevant unless you are buying RAM second hand. (9-10-A0) is the timing.. Generally the lower the numbers the less amount of clock cycles the faster chip.. But only relevant to motherboards that allow you to adjust the timings, most of the motherboards adjust them automatically.

There is a product selector on the samsung website https://www.samsung.com/semiconductor/dram/module/

Once you find your module, and you click the link, you'll end up on a page like: https://www.samsung.com/semiconductor/dram/module/M393A2K40CB1-CRC/

Notice that the URL contains the code of the memory module, and in fact, in some cases you can find slightly outdated modules just by modifying the path a little: e.g. https://www.samsung.com/semiconductor/dram/module/M393A2K40BB1-CRC/

0
What do letters and numbers in DDR2 description/designation/notation line mean?
0
Issue with 2 DDR3 RAM chips - Slow as hell with both slots filled (2x4gb) and runs like a tiger with only one in?

1
Why do I always have major memory errors on the first boot-up of the day?
4
Numbers on my RAM sticks that come after clock speed
3
How to identify a DIMM that does not have DDR2 or DDR3 written over it?
0
What part of installed RAM can be used at maximum?
1
Meaning of last 4 digits in a Samsung RAM memory stick
0
Missing part of the RAM after I installed new Fedora?
0
Asus Laptop Part Compatability - SSD and RAM Upgrades
0
Can I replace existing ram from PC3-10600U-9-10-B0 to PC3-10600U-9-11-B1