How to get better MIDI output for old DOS games

So I've decided to play an old DOS game using DOSbox, and I've been digging up some information about MIDI and how to get better MIDI sound.

The reason I got curious is that I have a Creative X-Fi titanium card which has its own built-in MIDI synths. If I understand correctly, these synths would allow to "translate" the MIDI data into actual audio and send it to my speakers.

I've consulted various resources on this topic, and in the end the steps I took were these:

Using the default DOSBox config for midi, I do get sound but it sounds the same as the default MS GS WaveTable Synth. Using SB X-FI Synt A, I get no sound output whatsoever.

I then took a third step and installed Creative SoundFont Bank Manager, which has a virtual MIDI keyboard that is supposed to output sound. Again, no sound output.

So the problem is here, how do I get to hear whatever sound that the SB X-Fi synthesizer is supposed to produce?

Hilariously, after writing my last bullet point, I decided to check my speaker properties, and as I went over the tabs, I saw this: 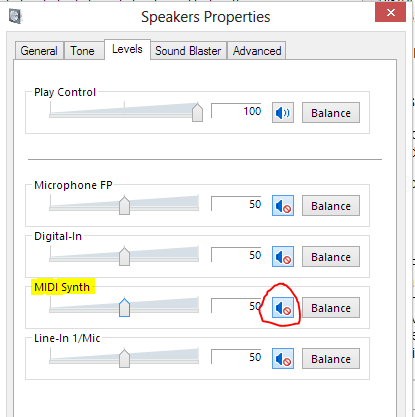 I'm still posting my question + self-answer because this ordeal took me several hours even before reaching the step in the picture above. I hope it may help any poor soul that just wants good MIDI under modern Windows with a real sound card.

Not the answer you're looking for? Browse other questions tagged audio sound-card midi creative or ask your own question.