I have 2x 1.5TB drives in a (two-way mirror storage pool). That pool recently hit 100% capacity meaning both drives had 0% space left.

I added 2x 4TB drives to the storage pool but Storage space doesn't attempt to rebalance the disk utilization. After I added I now see:

Seems that all future writes would now be concentrated on the newer drives. I was expecting Storage Space to get busy once it saw the new drives and begin rebalancing - but no such luck.

How can I rebalance the usage so that my read/writes are distributed roughly proportionately/equally across all drives in my storage pool?

Resurrecting this old question with something that finally works in the upcoming Windows 10 and Windows Server 2016 OSes.

Microsoft have added a Optimize-StoragePool PowerShell command in Windows 10 and Windows Server 2016 that rebalances storage spaces for an entire pool.

I blogged about it here.

Microsoft announced the feature just a few days ago as part of the new Storage Spaces Direct but it works just fine with normal Storage Spaces as well.

I had a similar issue when I discovered Storage Spaces (in Windows 8.1) and I was migrating my existing files. I started off with the drives:

So, I after shifting everything on to the 2 3TB drives, I connected the remaining 4 drives to Storage Spaces, created a space, then copied the files from the 2 populated drives into the space (parity resilience). After adding the two drives back to the space (sequentially), all the drives were at around 50% usage, but the 3TB drives where at 20% and 0% respective to when they had been cleared and added to the pool.

I tried waiting a few days to see if the system would rebalance itself, but nothing happened.

Eventually, what I discovered was I had two options:

I went with the second option, but in earlier tests, the first option seemed to work, but very slowly.

So, once all my files and disks where in the pool, I physically disconnected (USB in my case, in your case you could probably just disable the device) one of the fuller disks. Storage Spaces then started showing an error about "Reduced Resiliency", and gave me the option to remove the disk from the pool, which I did.

I then waited several hours (started it in the morning, went to work, came back to a finished screen) while Storage Spaces then repaired the spaces. Once the space had been repaired, I reconnected the disk, formatted it, and reintroduced it to the pool.

I repeated this step for all the drives I wanted to rebalance, working in an order from largest to smallest in capacity, so that my small 500GB drive was the last to be re-added.

Yes, this means that ultimately there is one drive left over that is at 0% usage, but in time, it was quickly filled back up to the average % usage of the entire pool

Windows 10 has the Optimize Pool command available right in the GUI: 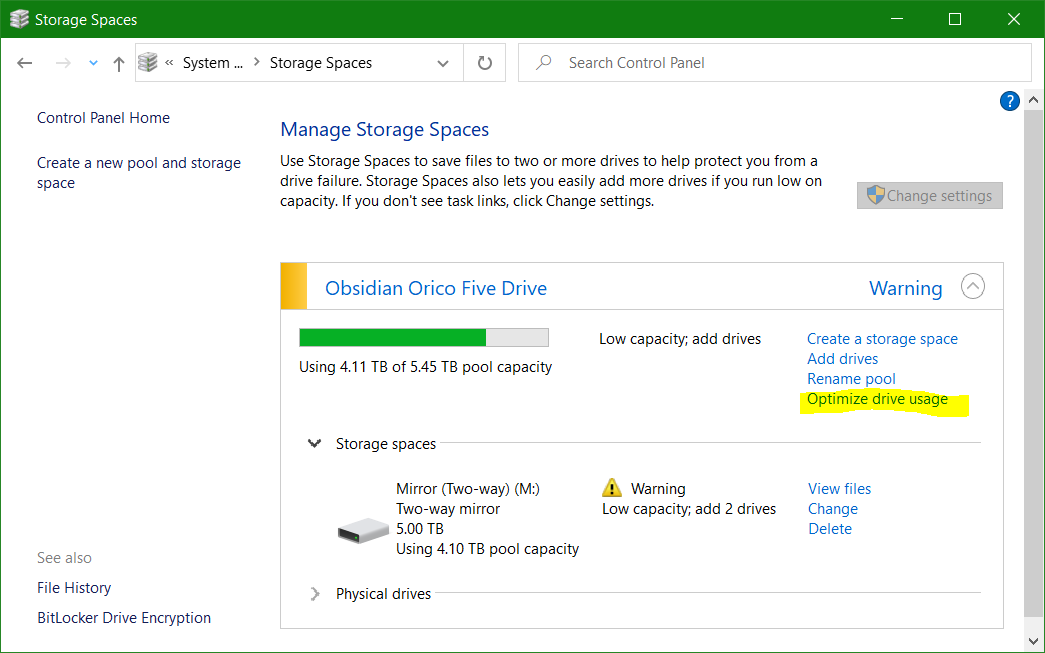 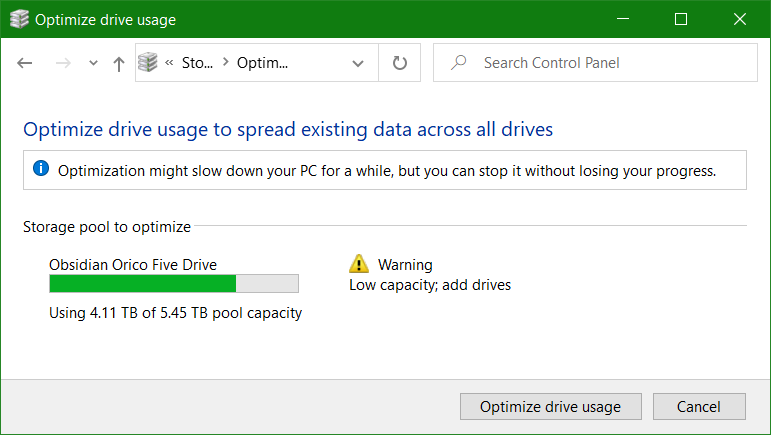 The ability to optimize a pool was added with Windows Server 2016. But unlike it's GUI-based workstation OS counterpart, Windows Server has no GUI to manage storage space optimization. Instead you must use powershell:

But also note that on Windows Server, the data will be automatically rebalanced 30 minutes after a drive is added.

You can get the status of the optimization through powershell (Again, Microsoft hates graphical user interfaces):

Not the answer you're looking for? Browse other questions tagged hard-drive storage storage-spaces or ask your own question.