Get The VMware Tools SVGA Driver On ReactOS? [closed] 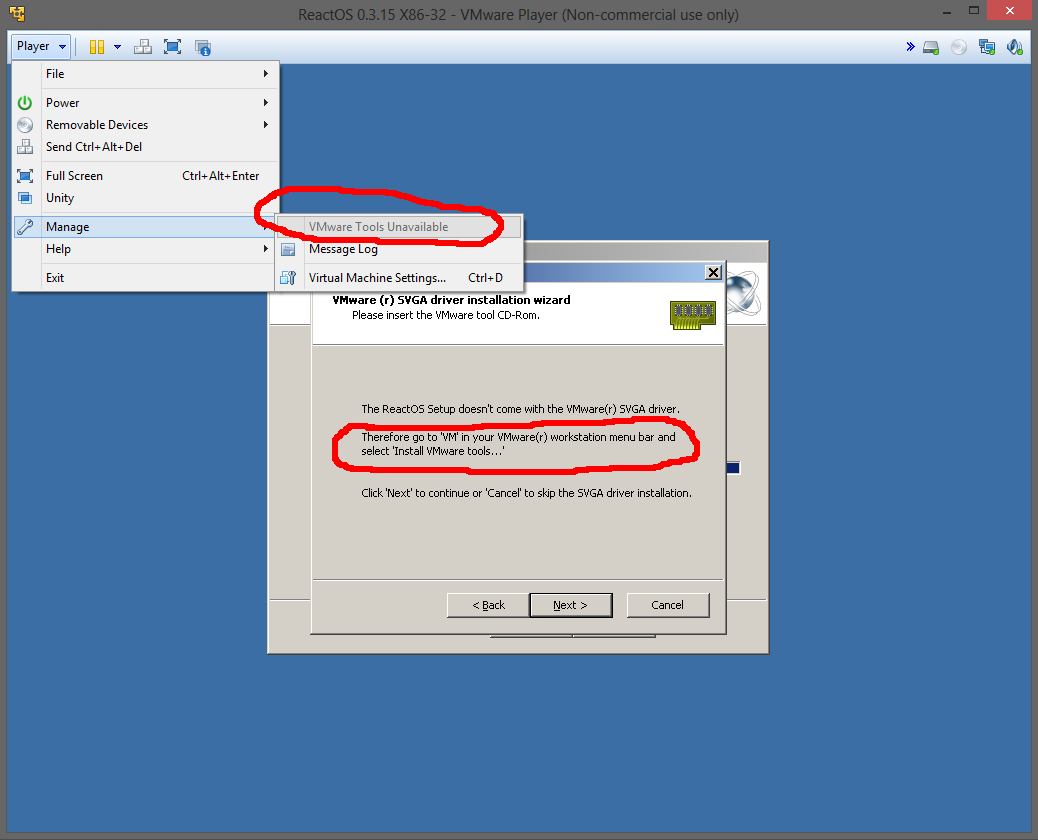 I'm setting up a ReactOS 0.3.15 X86-32 virtual machine in VMware Player 6.0.1. VMware player doesn't officially support ReactOS so as suggested in the ReactOS installation guide (http://www.reactos.org/content/reactos-installation-guide#vmware) I'm using the "other" profile. ReactOS however has support (and automatically detects) the SVGA driver from VMware Tools for this whom wish to install it; I do. The problem is that there are no tools for the "other" profile, as depicted in my screenshot.

Which profile should I be using instead, better yet can I keep using the "other" profile, and just manually connect the appropriate tools iso? If so which iso do I need to use?

ReactOS may be a re-creation of the NT kernel in general, but in order to work with Windows software it has to report itself as something recognizable. ReactOS is a server operating system so it currently reports itself as Windows Server 2003. I'm not sure which exact version of Windows Server 2003 though.

Based on this it makes the most sense to use the the Windows Server 2003 Standard profile. If you get mouse issues, pull the bottom of the VMware screen up so you have a scrollbar, this should allow you to click the next button, and at the next screen the mouse should work correctly. Get rid of the scrollbar by re-pulling the screen bottom down, and proceed with the installation.

If you attempt to use the built in feature of ReactOS to install the SVGA driver from VMware Tools VMware will provide the correct iso, and if you're wondering it's "windows.iso". Unfortunately ReactOS still won't find the SVGA driver on the installation disc, because it's tucked away inside the vmware installer.

After you've finished installing ReactOS if you attempt to install the driver using the VMware Tools installer, it will fail. Launch the VMware Tools installer, and choose "custom" setup type. Uncheck everything except the SVGA driver which should be set to "install entire feature". You will get an error from rundll32 saying "LoadLibrary failed to load 'tpvmmon.dll'. The install process is just partially completed before the error. If you browse to the ReactOS Applications Manager you should see VMware Tools listed under "Installed", but if you look in your Device Manager you will see the display adapter is still using the driver provided by the ReactOS Team.

If you attempt to install the SVGA driver by manually the hard part is getting a hold of it, because it's buried away inside the VMware Tools installer. The simpliest way is to install VMware Tools on a Windows 98 virtual machine, and then browse to "C:\Programs\VMware\Vmware Tools\Drivers\video\vmx_svga.inf", and copy the SVGA driver. In ReactOS right click and choose to "install". This doesn't work either. After performing a reboot you will still see the adapter is using the ReactOS Team's driver.

The fourth and final option is to take the copied driver and add it to the Vmware Tools "windows" iso file so that when the ReactOS installer tries to find it, it isn't tucked away in the installer. This doesn't work either.

At this time it doesn't appear to be possible to install the SVGA driver, though it appears there are/were plans to make it possible given that the ReactOS installation process includes the intended ability to do so.

Not the answer you're looking for? Browse other questions tagged drivers vmware-player vmware-tools reactos or ask your own question.