I have a memory stick which I have formatted to contain two ext2 partitions on my Ubuntu computer, one 2 GB and one 6 GB. I would like to use them on my Windows 7 computer now.

I am aware of Ext2Fsd and I have downloaded it, but I can only see one partition in Explorer. (The first, 2 GB one.)

I also have read this question about multiple partitions on memory sticks in Windows XP. In Windows XP memory sticks can only have one partition, but I am not sure if that has changed in Vista or 7. Also, I am sure I have sometime used a memory stick on the same computer that had two partitions (a big one named PUBLIC and a small one named SECURE, if that makes any difference).

I could try use the method suggested on the page to flip the removable bit, but I'm not very excited about the risk to lose my data.

Is there a way around this, or do I just have to keep using my Ubuntu computer?

UPDATE. I checked the Ext2 Manager, and here's a screenshot. 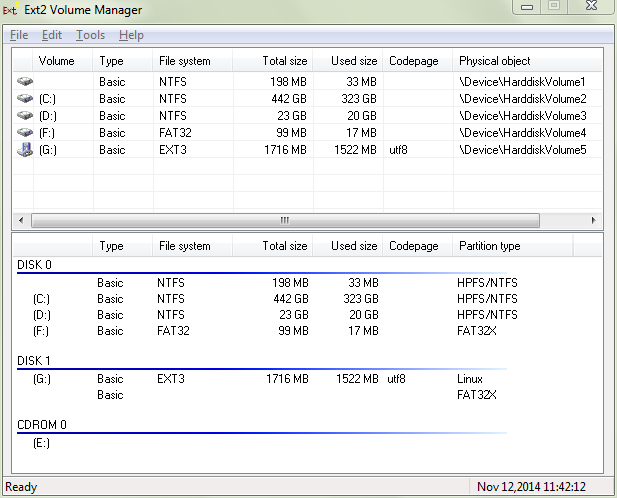 I believe the partition in question is the one on DISK 1 that is identified as FAT32X. (I'm quite sure it is ext2, though.) I tried opening its properties. 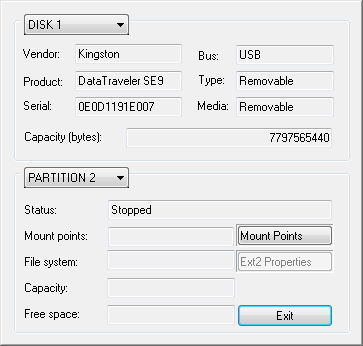 I then clicked Mount Points. Nothing was on the list, so I clicked Add. 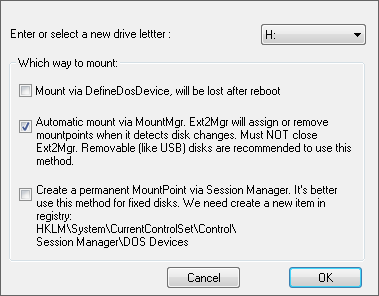 Clicking Exit now put H: next to the drive in the list, but it's still not working.

Open the manager view by double-clicking Ext2Fsd in the start menu. See if you can see the second partition there. If so, highlight it and choose one of the mounting options.

Not the answer you're looking for? Browse other questions tagged windows-7 partitioning filesystems removable-media ext2 or ask your own question.

40
USB sticks and multiple partitions
2
Formatting a memory stick with two partitions?
5
Odd memory problem, windows 7 32-bit
0
Windows 8.1 wants to format a USB stick with an unusual but valid GPT partitioning scheme, why?
13
Multiple Windows installers on a USB stick
0
Windows 10 setup skipped partition D
0
What is the state of ext2/3/4 support in Windows as of 2020?