So, after decades of using Windows I've just discovered the single most destructive command, and it's an everyday shortcut... The CTRL+Z... Yup, that's right.

Here's the problem. I always leave my computer on 24/7, and today I was using a software (Multisim, a SPICE simulator) and trying to undo something (well, many things in fact). As the simulation was huge and I was doing so much at once, I didn't notice the application was out of focus (the window itself was not selected, it was on Windows Explorer instead) and I was in fact "undoing" several actions I've made in the last days... After some CTRL+Z presses a Windows message appears saying that a file is in use, hence cannot be deleted, and then I realized what I did... Absolute disaster - I was accidentally deleting Gigabytes of information, and now I've no way of getting them back... The worst part is, I don't even know for certain what I've changed or deleted, as I don't exactly recall what I did in the last few days. The affected files are not in the recycle bin, they've just been permanently deleted without any confirmation whatsoever. When I noticed, I immediately used Recuva, selected Deep Scan and started to Scan the affected hard drive, but the missing files weren't found.

1) Is there a history/log of the undo actions? I've already checked Event Viewer and there is nothing there.

2) Is it possible that the Undo command erases something permanently without any confirmation dialog, bypassing the Recycle bin, etc?

Unfortunately, this is no recourse for this.

However, you can prevent it from happening again.

A program wrote by a Super User member for this exact thing, still works.

I confirmed a moment ago that it works all the way up to Windows 10. 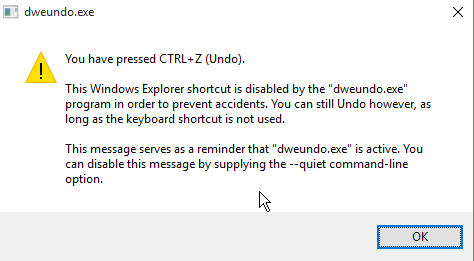 CTRL+Yis the (usual) standard "REDO", opposite, reverse action of CTRL+Z"UNDO".

Back in the day, in the old Windows XP explorer GUI, if you had the status bar visible at the bottom of Windows Explorer, you could tell what either Ctrl+Z (undo) or Ctrl+Y (redo) would do.

As I sit here, I'm trying to figure out how to see this... because I just accidentally typed Ctrl+Z (undo) with an app not in focus as well. I can solve my issue easily: a single Ctrl+Y (redo), and then a second time will make a ding claiming it's not a possible command. Undo once. Redo once. Redo twice fails. Problem solved.

You could try that.

Or perhaps there's a way to get at the data the old GUI used to show... perhaps by installing the original Windows XP explorer in some manner. Is this possible? It must be.

I just want to pay it forward here, but I worked for hours on some files, and then stupidly, hit Control-Z. They were ALL gone. I did Control-Y and Control-Shift-Z...NOTHING

I checked my Windows Recycle Bin....GONE!!

Then I had a glimmer of hope, because I am so used to it as 2nd nature, that I then realized I save my files to a cloud drive as a mapped drive (I don't want to say which one i.e. plugging a vendor), but with a wish and a hope, I checked the main repository online and in THAT Recycle Bin...ALL of the files were there. Literally brought me to tears!!

If this helps someone avoid what I just went through (up until I was able to resolve it), then it's paid forward.

Not the answer you're looking for? Browse other questions tagged windows windows-8.1 undo or ask your own question.