How do I implement the following home network architecture?

I'm trying to get my home network to look something like this: 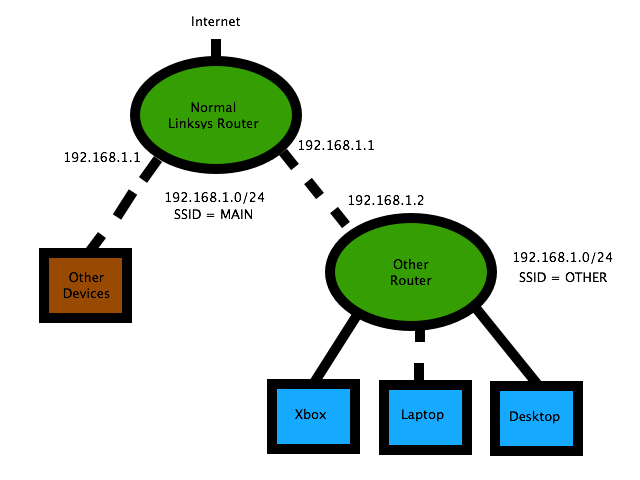 How do I accomplish this? I have tomato installed on the "Other Router", but I could switch to DD-WRT (the router is compatible with both). I know how I'd do this if the connection between "Normal Linksys" and "Other Router" were wired, but I can't figure out how to do this wirelessly, even though it seems like it should be pretty straightforward.

EDIT2: I got what I wanted by installing dd-wrt on only "Other Router" and setting up a wireless repeater bridge. I did this instead of setting up an access point because my normal linksys router doesn't support them, is incompatible with dd-wrt and tomato, and because I just wanted to do it this way I really wanted a separate SSID for my laptop/desktop/xbox, even though there really isn't any reason for it.

For anyone who might be reading this trying to do something similar, you might have to make the security key to connect to your main router the same as the wireless key for your other router (even though you're supposed to be able to make a new key on "other router", it wouldn't work for me unless the keys used the same algorithm and had the same value. It also worked if wireless security was disable on "other router", but that seemed like a bad idea).

Don't use WDS unless you have to. It's gimmicky and often unhelpful. and wireless wds usually costs bandwidth.

If I understand your diagram and post all you really want is your tomato router to act as an access point only. My memory won't serve me here but it's should be called something like Bridge mode, Access Point mode or similar - I'm sure Google can be a better friend than me here, sorry.

Acting as a bridge (or bare AP) all devices will recognize the Linksys @ .1.1 as the router for the network and in this way everyone will share the same dns, same dhcp pool, etc.

If this is not what you want, please elaborate more on what it is you're trying to accomplish.

WDS is what you want to use to accomplish this. I know for a fact that DD-WRT supports WDS, and from looking at this howtogeek article it would appear that Tomato does as well. The "other router" would simply pass DHCP requests on to the Linksys, and the Linksys would act as the primary DHCP server/gateway/etc. Essentially setting up WDS between the two routers would do everything that you're asking. I'm not sure if your Linksys would require custom firmware (ie Tomato/DD-WRT/OpenWRT etc) to support WDS or if it would do it natively though. Also note that with WDS there is no need to have a separate SSID or even a separate network/subnet.

3
Configuring network route between two routers on home network
0
Accessing Tomato router in bridging mode?
2
Troubleshooting wireless client-bridged networks between two DD-WRT routers?
0
Securing a subnet
2
Bridged Tomato network - problems with some devices on bridged wired segment
1
bridging DD-WRT leads to un-routable ip addresses
1
How to set up a wired/wireless home network with 1 wired and 6 wireless routers
5
How to set up Asus RT-N66U in bridge mode with wired connection to main router?
1
Allow two subnets to talk to each other over a wireless bridge
2
Tomato router: Bridge to Ethernet LAN, Devices access via Wireless