I have a HP Pavillion dv6-6123cl Entertainment PC with a locked bios. I use a program called K10Stat in order to get around this and overclock anyway. I have AMD A6-3400 APU with Radeon(tm) HD Graphics. I did some testing and was able to benchmark my core to a max of 3.1 ghz, and 2.15 (with the previous value as boost) for a more thermally stable setup. 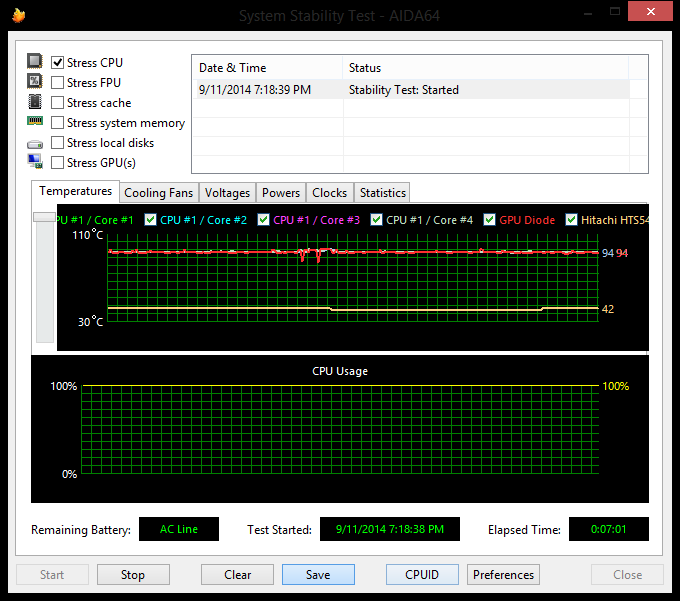 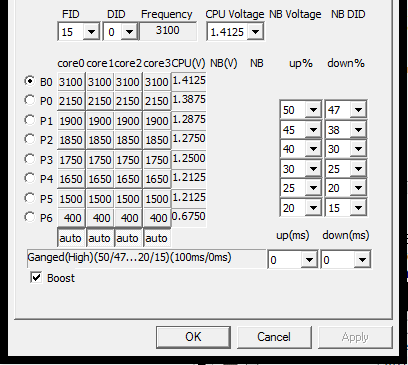 When I run a specific cpu intensive game, my cpu becomes 'stuck' at 1.89ghz either though the core load is 100% and even more strangely, overheats the computer components to > 115 C (Which triggers bios shutdown), either though it isn't at full speed. When the cpu is doing other things at 2.15 Ghz, the computer runs fine (such as in the benchmark picture where the core is at 100% utilization and max frequency). Why isn't the cpu: 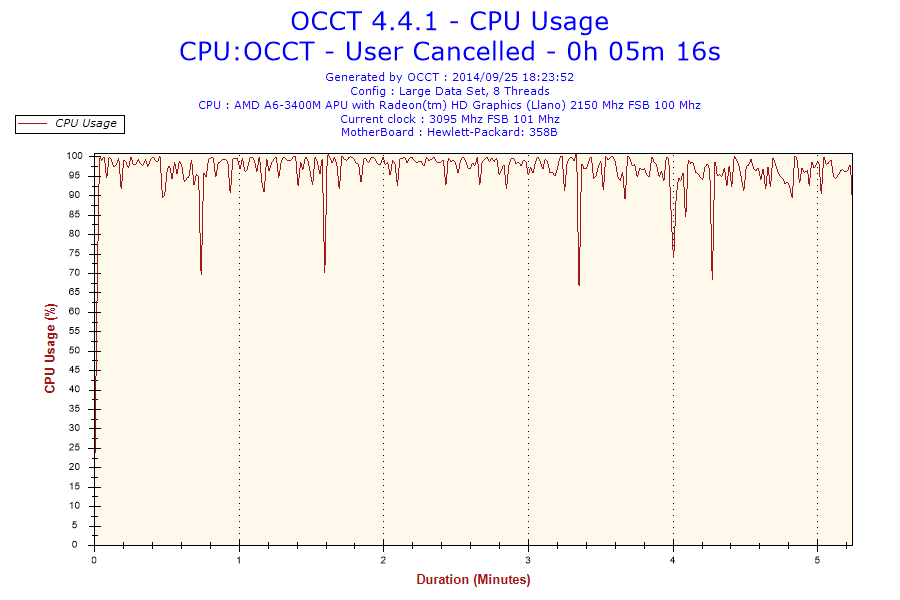 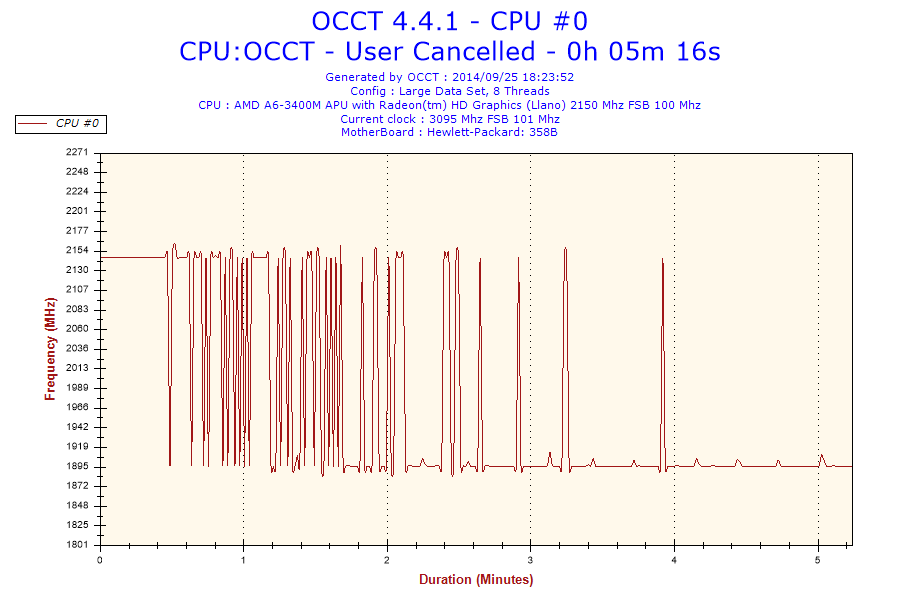 You can see here that the frequency starts out at the desired max frequency, but begins to drop more and more towards 1.89 ghz as the benchmark goes on. 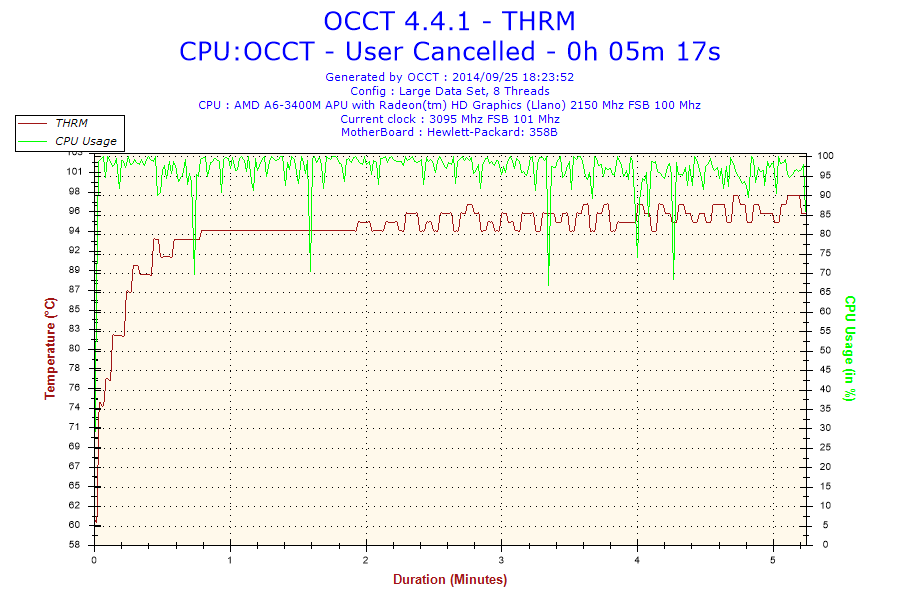 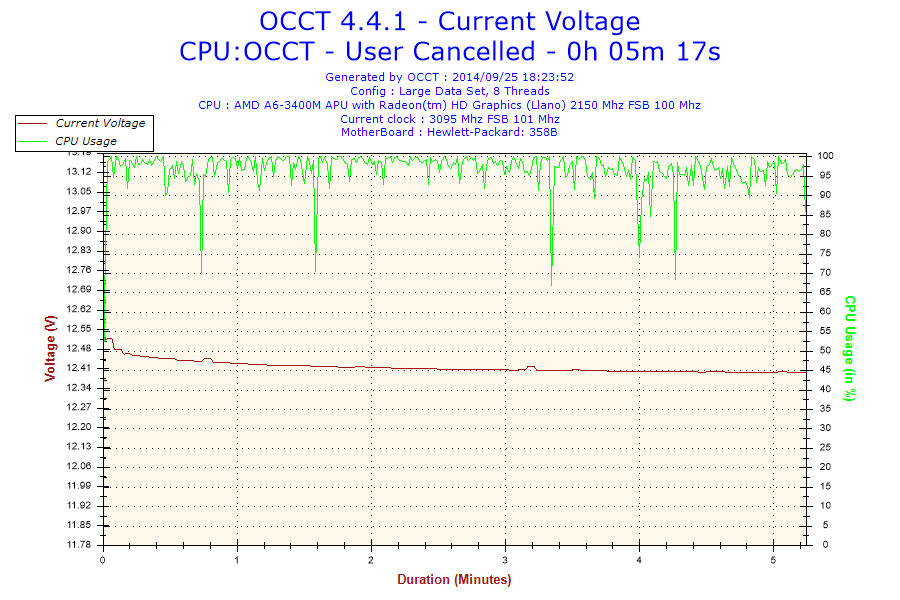 Interesting enough it appears that the Voltage slowly decreased and the thermals raised up whenever the cpu became 'stuck' at 1.89ghz. You can see the clearly benchmarked 94 degrees I described seeing when maxed out at 2.15 ghz, before the 1.89ghz temperature fluctuation stage begins to come into play.

Also the software appears to read my 'original' cpu speed as my new overclocked value instead of the cpu stock value of 1.4ghz.

This issue seems to appear if the voltages near the top of your table are near the maximum voltage. I was able to stably over-clock to 3ghz with 3.1ghz boost without having these issues. I had redesigned my frequency to voltage ratios and was able to get much more performance without having thermal protection stop by to interfere.

EDIT: I was a beginner Overclocker at the time of writing this post. Several years later, reviewing this question as a much more experienced overclocker this is definitely a case of Thermal Throttling.

Not the answer you're looking for? Browse other questions tagged performance cpu bios overheating overclocking or ask your own question.