Say I have 1280x720 pixels on my screen and the current resolution is set to 1280x720 as well. What are the differences between the 1080p version and the 720p version of the same media? Is it noticeable to an end user (a non-video expert or enthusiast)?

Clarification Edit: The question was in regard to .mkv files rather than YouTube videos.

Differences in video probably won't be noticeable for untrained eye. 1080p video would have to be downscaled anyway. It won't be exactly the same, though, because compression and scaling are applied in different order.

Let's assume that original video was 1080p. In this case the 720p video was first scaled, then compressed. On the other hand, 1080p clip was first compressed server-side, then scaled on your machine. 1080p file will obviously be bigger. (otherwise it would offer higher resolution, but at lower quality, ruining the visual experience and invalidating the point of using higher resolution1)

Lossy compression usually causes visual artifacts that appear as square blocks with noticeable edges when video is paused, but aren't visible when you play it with normal framerate. 1080p file will contain more square blocks (caused by compression) than 720p video, but those blocks will be of approximately the same size in both videos.

Things get a bit more complicated if source material was bigger than 1080p. The 1080p clip is first scaled to 1080p and compressed before you play it and then scaled once again while playing. The 720p clip is scaled only once and then compressed. The intermediate scaling step which is present in 1080p video case will make its quality slightly worse2. The compression will make 720p even worse, though, so 1080p wins anyway.

One more thing: It's not only video that is compressed, but audio too. When people decide to use higher bitrate1 for video compression, they often do the same with audio. 1080p version of the same video may offer better sound quality than 720p video.

1: A bitrate is the factor that decides how good the compressed video is at the cost of file size. It's specified manually when video is compressed. It specifies how much disk space can be used for every frame (or time unit) of compressed video. Higher bitrate = better quality and bigger file. Using the same bitrate with the same framerate will produce files of (approximately) the same size, no matter what video resolution is, but the higher resolution is used, the less disk space can be spent on single pixel, so increasing output resolution without increasing bitrate can make compressed video look worse than it would with lower output resolution.

2: Try it yourself: open up a photo in any editor and scale it to a bit smaller size, then again and again, save it as PNG. Then open original photo again and scale it to the same size in one step. Second attempt will give better results.

@Raestloz asked for actual videos for comparision in his comment. I couldn't find 1080p and 720p versions of the same video for comparison, so I made one.

I have used uncompressed frames from "Elephant's dream" movie (http://www.elephantsdream.org/) which are available under CC-BY 2.5. I have downloaded frames 1-6000 and converted them into videos using ffmpeg and following batch file:

Then I have split videos back into single frames. Extracting all frames is slow and takes a lot of space (true story), so I recommend using ffmpeg's -r switch to extract every 8th frame (ie. -r 3 for 24 fps video)

I can't provide future-proof download links for videos, but these steps can be easily replicated to create clips such as mine. For the record, here are output file sizes: (should be roughly identical for both resolutions, because bitrate is constant per second)

Downloads for samples of extracted frames are available at the end of this post.

Here's a comparison of the same region cropped from both frames after scaling to 720p (frame 2097). Look at the fingers, heads and the piece of equipment hanging from the ceiling: even going from 500 to 700 kbps makes a noticeable difference. Note that both images are already scaled to 720p. 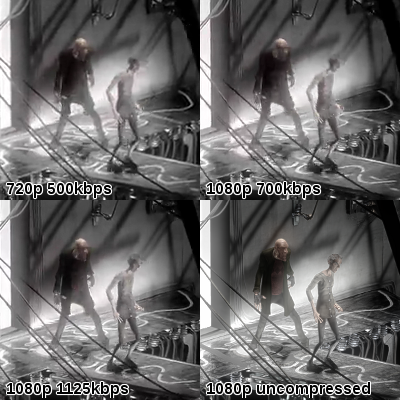 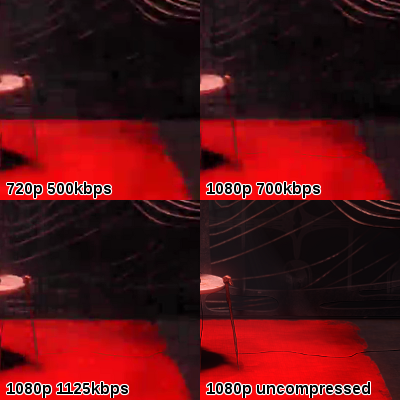 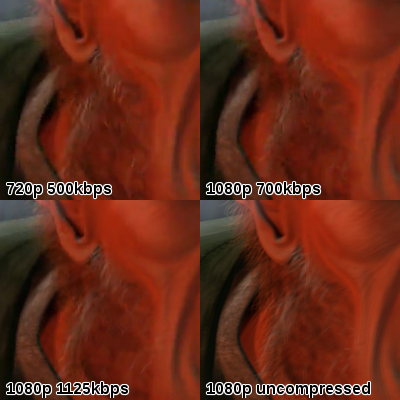 GIFs of all three frames, with increasing bitrate. (Unfortunately I had to use dithering because GIMP doesn't support more than 255 colors in GIF, so some pixels are a bit off.) 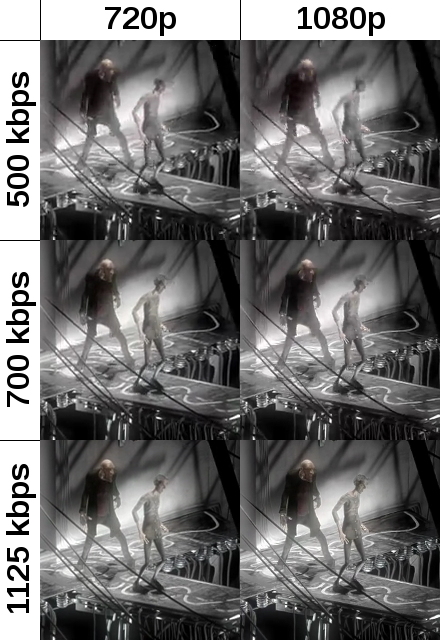 For 500 kbps, 720p is a bit better than 1080p. 1080p appears sharper, but these details aren't actually present in uncompressed image (left guy's trousers). With 700 kbps I'd call it a draw. Finally, 1080p wins for 1125 kbps: both stills look mostly identical, but picture on the right has more pronounced shadows (pipes on the back wall and in lower right part).

Now this is pretty subjective, but here's what I can see:

It's scaling that starts to play role here. One could intuitively answer that 1080p will look worse than 720p on a 720p screen, because scaling always affects quality. It's not exactly true in this case, because the codec I used (h.264, but also other codecs) has some imperfections: it creates little boxes that are visible on contrasting edges. They appear on the 1080p snapshot too (see links at the bottom), but resizing to 720p causes some details to be lost, in particular smoothes out these boxes and improves quality.

Okay, so let's calculate difference between 720p (left) and 1080p (right) vs. original frame and stretch the contract, so it's clearly visible: 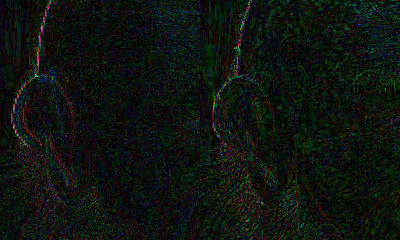 This image gives us even clearer vision of what is going on. Black pixels are represented perfectly in compressed (and resized to 720p) frames, colored pixels are off proportionally to intensity.

This test is purely synthetic and doesn't prove that real-life 1080p video looks better than 720p when played on smaller screen. However, it shows strong relationship between video bitrate and quality of video resized to screen size. We can safely assume that 1080p video will have higher bitrate than 720p, so it will offer more detailed frames, most of the time enhancing viewer's experience. It's not the resolution that plays most important part, but video bitrate, which is higher in 1080p videos.

Using insanely high bitrate for 720p video won't make it look better than 1080p. Post-compression downscaling can be beneficial for 1080p, because it will shape compression noise and smooth out artifacts. Increasing bitrate doesn't compensate lack of extra pixels to work with because lossy codecs aren't perfect.

What's the difference between this artificial test and real-life video?

Once again: I don't say that this post proves anything. My test is based on artificially-made video. YMMV for realistic examples. Still, the theory probably is true, there's nothing that would suggest it can be wrong. (except for scaling thing, but the test deals with it)

Concluding, in most cases 1080p video will look better than 720p video, no matter what screen resolution is.

It depends heavily on the media.

For example, if you have a 720p display and you play a youtube 1080p I can see the difference when things moves. Its just this tiny bit more detailed. Then again, someone with less trained eyes probably won't see a difference.

Aside of that 1080p requires more rendering power to display, and the quality increase, if it is there, is just not worth it. My recommendation would be to go for 720p no matter what.

Viewing 1080p video on a 720p screen may cause the quality of the video to be distorted as it tries to work out where to cut pixels. Chances are it won't be noticeable, but there really is no benefit of 1080p videos over 720p while using a 720p screen.

Depends on your hardware and whether or not it does upscaling/downscaling. Theoretically, 1080 lines compressed down to a set/monitor that can only read 720 lines (that's what 1080/720 refers to; the number of lines in your picture) should improve the image. More is better, right? However, let's look at a 40" TV for instance. 720 lines on a 40" TV comes to 18 lines (or pixels) per inch. 1080 lines on a 40" TV comes to 27 lines per inch. Can your eye tell the difference with an object that small? Probably not. Also, you have to take into account how the video file was processed (you mentioned MKV, which is a video format created on a computer and is therefore dependant on the quality of the video card) and whether or not top-quality hardware/software was used.

So, to answer the question, most people will not notice much difference between the two videos, if at all.

The result depends on the resizing algorithm. But the default algorithm in most situations will produce a sharper image. So a 1080p video may look better on a 720p screen, provided that the 720p is the original version and was not scaled down from 1080p or a higher resolution

In fact scaling up then downs is how may antialiasing algorithms work, and also how fractional dpi scaling works in many OSes like iOS or macOS. For example on a screen at 150% dpi the interface will be rendered at 3 times the physical resolution, and then it'll be scaled down to a half the scaled up version, resulting in a 3/2 scaling ratio

-> Two main factors to notice the difference are PPI and Distance of screen from your eye and at some extent media type (but selective cases).

-> If you want to notice the difference then try some media having text in it then you can clearly see that text in 720p media at 720p screen will look more bright and have sharp edges than 1080p media on 720p screen. (ppi must be <150 and distance between screen and eye <5ft)

I also hate that frames with a lot of motion tend to be very blurried as that is not HD. Real HD would have freeze frames of motion shots just as sharp as non motion frames but they are not even close in quality.

But to answer your original question, it depends on many factors. Using still images as a basis for moving images, there are competing factors: starting with higher resolution and then resizing down usually yields a better quality image as noise (such as in a blue sky) is cleaned up. The quality is especially good if the downsized image is an exact 50% resolution drop in each dimension. So for example if we took a 2048x1536 still image (3MP) and downsized it to 1024x768 (3/4 MP). The other competing factor is the more stages of processing (in an attempt to save storage space of the image), usually the worse the image quality gets. For example, a JPG originally in 2048x1536 in a camera will have artifacts then when resized down and resaved as a smaller JPG, more artifacts will be introduced.

Not the answer you're looking for? Browse other questions tagged video resolution scaling high-definition high-resolution or ask your own question.

1
Does 2K or 4K media look better than HD on 1080p monitor?
78
How to extract one frame of a video every N seconds to an image?
17
Can compressed videos be decoded back to their uncompresed original format?
0
On a 720p monitor, should it be possible for me to see 1080p? Or at least the difference between the two?
-1
Will 4k video look better than 1080p video on 1080p TV/monitor?