Does a greater number of hard drive platter increase the risk of failure? 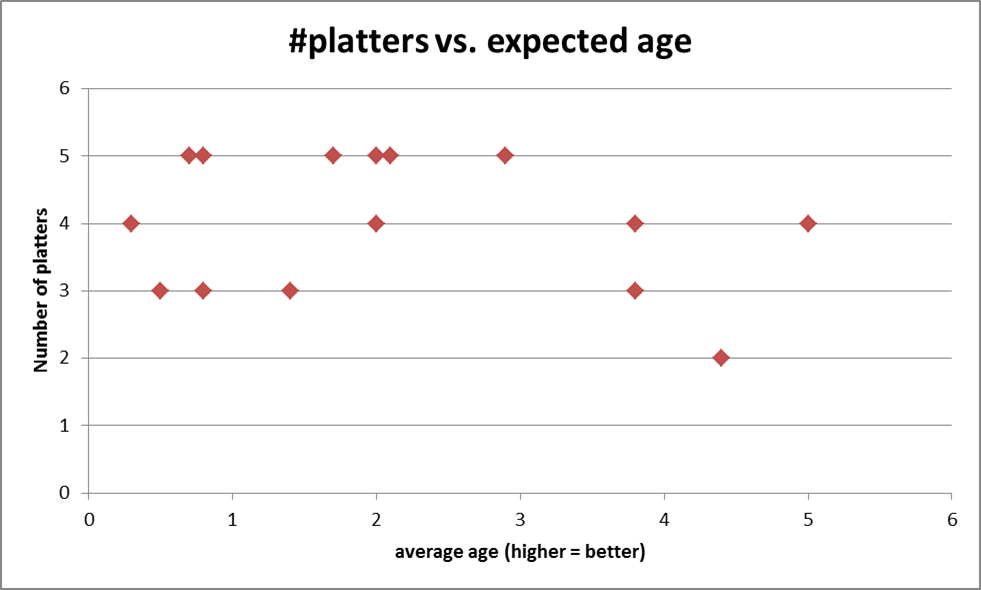 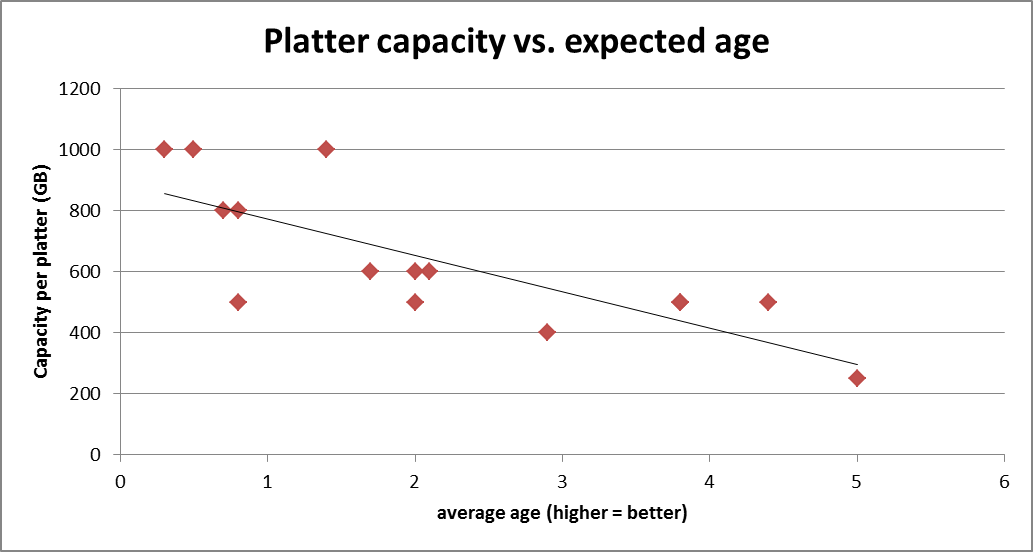 My conclusion, (without further statistical testing or conditional probability analysis) is that the number of platters isn't really much of an issue (in this test pupulation), but the platter capacity is. You are better off (in terms of expected age) with more platters and less capacity per platter.

Having less platter means less mechanized parts, so less chance of failure. Consequently it also means less heat and also failure. But the problem is that if you got a failure on a whole platter, you will lose everything.

On the other side, a single platter means much more density, so do speed and access times.

I do personally prefer one platter since it's faster, lighter, but also less failure due to less mechanized parts. I mean, the more you have, the more it will be harder for the heads to spin correctly on the right cylinder, so the more it will easily be aged.

Technically, the parameter of interest should be the number of read/write heads rather than the number of platters.
Typically there would be one R/W head per platter surface. A platter has two surfaces, so if both surfaces are used for data storage, then the number of R/W heads is double the number of platters (for the typical case).
I haven't opened up a HDD in a long time, but in the past I have seen HDDs built with unused surfaces and/or platters. Presumably these were platters that had only one "good" side and installed in a low-capacity model that was otherwise identical to a high-capacity model.

Increasing the number of R/W heads in a HDD is considered a performance benefit, since more data would be in each cylinder and thus can reduce seeks.
The typical tradeoffs for more R/W heads is added cost and reduced reliability (added electronics, more mass to the head actuator) and increased susceptibility to a head crash.

I would consider a 2-head (single platter) drive to have less chance of failure than a 8-head (4 platter) drive. But (assuming similar areal densities) the 8-head drive should have better random access times.

How about 2 platters vs 3 platters?

Until someone quantifies the increased risk of failure due to the number of R/W heads, you shouldn't base reliability and/or a purchase decision solely on the number of platters and/or R/W heads.

Not the answer you're looking for? Browse other questions tagged hard-drive or ask your own question.

6
What are disk sectors for?
3
when buying a new HDD, which is better RELIABILITY, having 4 heads or 6 heads?

0
Laptop making clicking sound — is it really hard drive failure?
0
Laptop Hard Drive Boot Failure
4
Hard Drive Failure? Cannot run CHKDSK. Recovery?
1
Does shredding a hard disk drive decrease its lifetime and/or performance?
0
Hard Drive Failure? Windows formatting incorrect disk on install?
0
After performing a platter swap (hard drive repair) it seems like the issue isn't with the PCB or head or mechanics but with the platter itself?
0
Is there any predictive way to watch for Hard Drive controller failure?